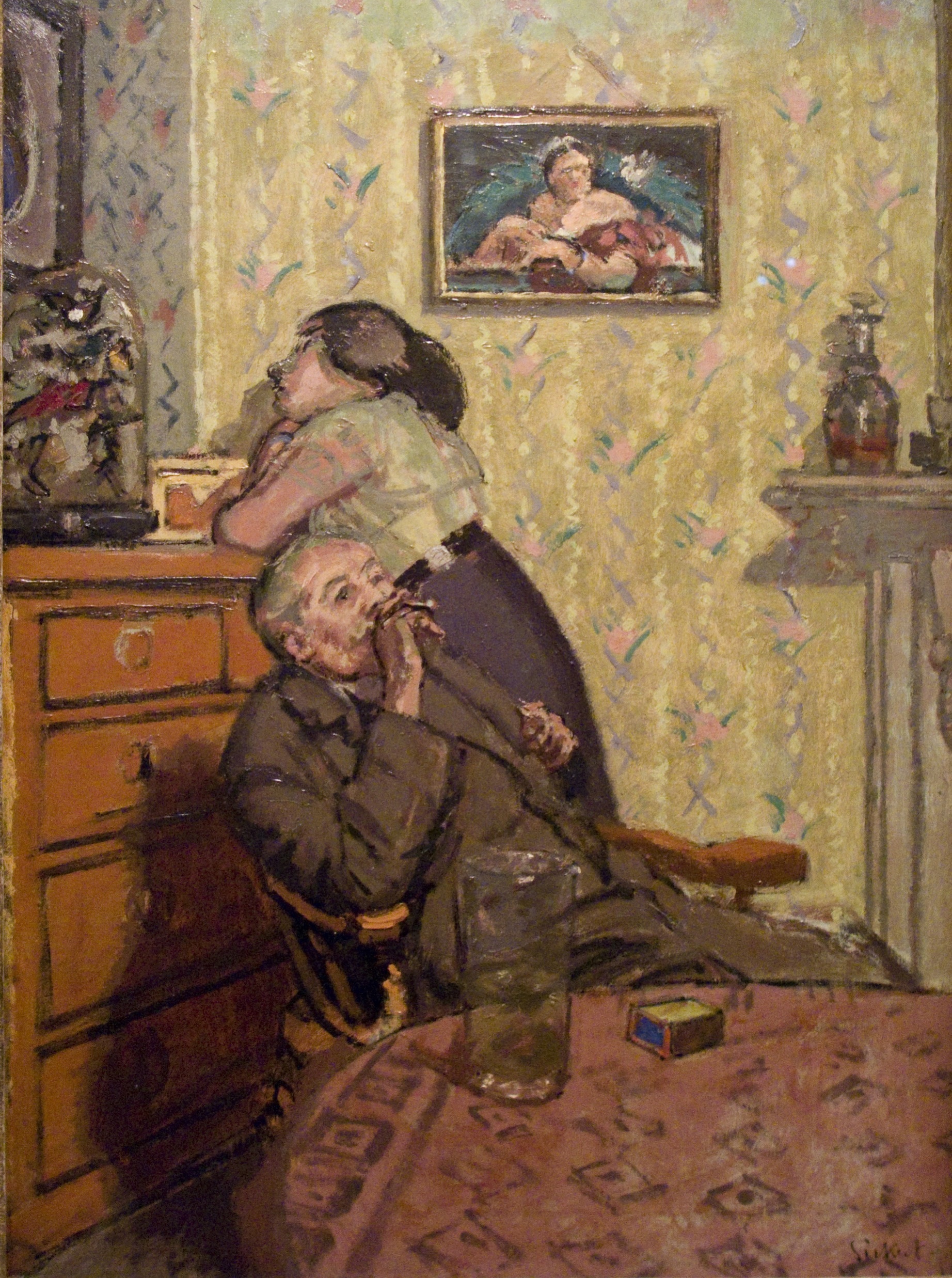 By venturing up the stairs, through the Italian renaissance, and up the stairs once more, before a quick left turn, you will find, between two Brightons, a scene of pervasive beige. A brown man lounging in the foreground while his wife discontentedly leans against a dreary cabinet: a character providing a yawning chasm of nothingness that provides space within an otherwise crowded and smoke-filled room. As the last of five versions, the Ashmolean holds the ‘Ennui’ that inspired Victoria Woolf’s 1934 pamphlet – Walter Sickert: A Conversation (written at Sickert’s own request) – a brighter, smaller, more condensed version than its forerunners, this final depiction of the concluding chapters of a gradual descent into a deeply boring married life is part of a wider, ennui-istic artistic movement. Within this, it is possible to perceive the satisfaction and escape of the artist, as well as a source of our own security: a solace found through a glimpse into a world of shared sentiments and being.

This continental malaise is visible with stark clarity in the obfuscation of the characters behind a veil of Bland.

Contextually, ‘Ennui’ is a piece situated in a decade of boredom, between Kierkegaard’s 19th conception of boredom as ‘demonic pantheism’ – an all-consuming, toxic emptiness – and Heidegger’s mid-20th Century depiction of a ‘muffling fog’, stripping the world of all meaning. This continental malaise is visible with stark clarity in the obfuscation of the characters behind a veil of Bland. Dirty yellows, vulgar wallpaper, a sea of brown, all condensed into a single scene – at once both nauseatingly busy and mind-numbingly dull, a clash of beige on beige. It is a piece that invokes the silence of Hammershøi’s interiors which appeared just a couple of decades prior. In both, you can almost hear the tick of a clock, a rasping cigar-addled breathing, or, for Woolf, the impatient tapping of a glass on a bar counter.

In fact, the two artists, find a connection in Whistler: Sickert’s tutor and a man who, it is claimed, Hammershøi attempted to meet. He was told Whistler was too busy and never made the effort again – I imagine it was probably raining at the time, too. Dullness and disillusion are hard to escape in this epochal dissatisfaction, and regret is oiled over the faces of the subjects, Hubby and Marie. Much like Solstad views his novels as the ‘excavation’ of works already existing, out there to be discovered, it is easy to imagine ‘Ennui’ independent of any artist or viewer, and it is clear that Sickert did not have to dig too deep to ‘discover’ his subject.

Dullness and disillusion are hard to escape in this epochal dissatisfaction, and regret is oiled over the faces of the subjects, Hubby and Marie.

Fortunately, boredom is not the end-point. We can instead draw out two sources of satisfaction from Sickert’s work, for disenchantment is not the mood that is forced upon us when we stand before it. Instead, if beige can be said to screech, then ‘Ennui’ sees Sickert make it sing. It is in this song that we find ourselves in a world of Others: a community typified by a shared underlying discontent. Furthermore, there is a satisfaction visible in this fifth attempt in the drawing out of beauty from dissatisfaction; of the ability to create from the uncreative. Sickert laughs in the face of ‘Ennui’ – a mood characterised by mental exhaustion – through his active ability to depict the inactive, by finding beauty ‘over the shoulders of the innkeeper’.

When Woolf notes the ‘zone of silence’ existing in the middle of each part of art, in which the artist themselves lives, we cannot help but find Sickert – sat opposite his schoolfriend, perhaps just out of shot, or peering in from the glass case of stuffed birds. In every mode he is laughing, not with malice, but at the grand absurdity of disillusion, or boredom, or happiness. Art need not be for anyone, but that does not stop us from seeing it as meaningless observers, and we need not laugh with Sickert to find comfort in this post-materialist depiction of the human condition. Though ‘one must be a fly in order to die in aromatic pain’, it is not death but comfort that is sought. ‘Ennui’ is rarely a singular phenomenon, but it is perhaps rarer to find reason to overcome our subjectivity and find others who feel the same. Sickert succeeds in achieving this, and in drawing together this inter-temporal and international community of the Bored, I for one am grateful for this provision of negative comfort, for ‘on they must go, up they must get’.