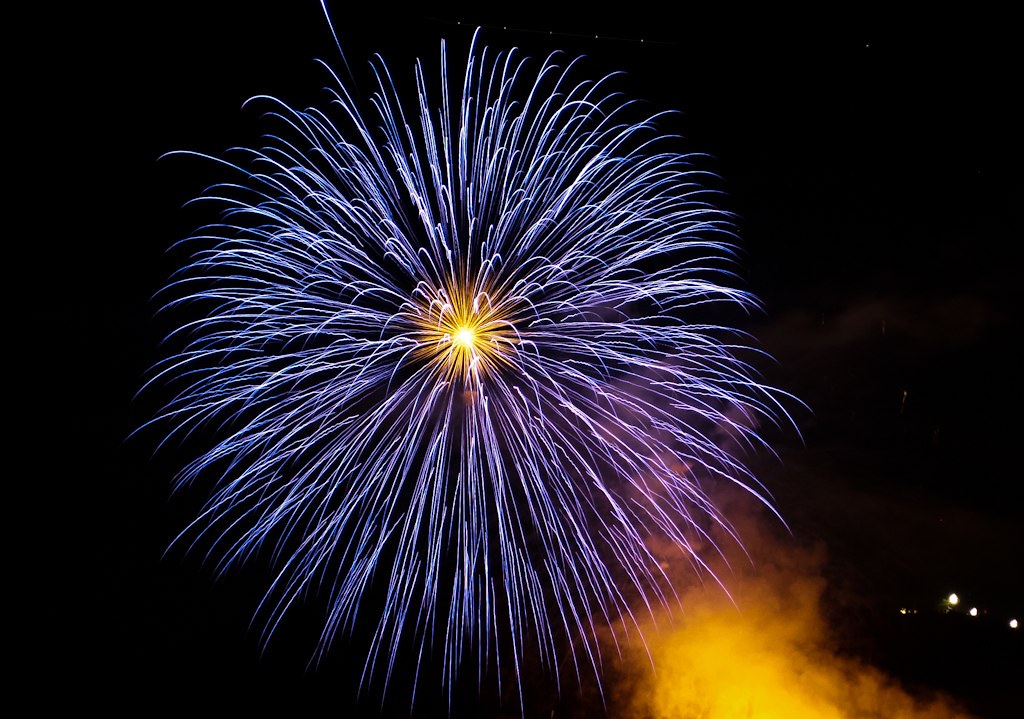 The sparks from a sparkler are 1000-1600°C. Yet, they are still safe to use because there is a difference between temperature and energy. The thermal energy of the spark is related to its mass, as well as its temperature. As sparks have little mass, they do not have enough thermal energy to be dangerous.

Had Guy Fawkes lit the 2500 kg of gunpowder under the Houses of Parliament, estimates are that the radius of damage would have been nearly 500 metres.

Fireworks were invented in China. Bamboo sticks were written on and left to dry on coals. If left for too long, the wood would expand and eventually burst, producing a large bang. This was the birth of the firecracker. Around 200 B.C.E., Chinese scholars used these firecrackers to scare away large mountain men, and ward off evil spirits. The modern firework was also invented in China. Sometime between 600 C.E. and 900 C.E., a Chinese cook mixed potassium nitrate with sulfur and charcoal, inadvertently inventing gunpowder. They were trying to light a fire to cook over, but instead produced colourful and explosive flames.

Marshmallows taste better when heated on the bonfire. This is because the intense heat of the bonfire caramelises the sugars in the marshmallow, breaking them down into smaller molecules. This produces the buttery flavour and golden colour. This chemical reaction requires really high temperatures, which you can achieve in the microwave.

Layering of elements in fireworks produces their sound. Elements in fireworks are found as organic salts. These salts are combined with oxidisers, which are materials that are firstly, flammable, and secondly, increase the rate of burning once ignited. The organic salts and oxidisers are layered, and each layer burns one at a time. As each layer burns, it releases gases, resulting in the whistling sound of fireworks. Aluminium or iron flakes create hissing and sizzling sounds, while titanium produces loud bangs. You can often see a firework before you hear it, because light travels faster than sound. Sound travels at 671 mph, whereas light travels at 671,000,000 miles per hour.

The different colours in fireworks are produced by different metal elements. When an element burns, its electrons (negatively-charged sub-atomic particles that make up atoms, alongside protons and neutrons) gain energy and become ‘excited’. This energy is released as light. Different chemicals, made up of different combinations of elements, burn at different wavelengths of light, thus producing different colours when they burn. Strontium and lithium create deep reds, copper burns blue, titanium and magnesium create silver and white colours, calcium produces orange, sodium produces yellow, and barium produces green. Combining chlorine with specific elements such as copper and barium can produce neon colours.

When making fireworks, workers must wear cotton clothing. Synthetic clothing generates static, which could set off the explosives.

Bonfires pop and crackle because the wood is not completely dry. When the moisture in the wood is heated, it vapourises, causing pressure to build up. When the pressure is too much, the vapour escapes the wood, producing the distinctive popping sound.

Scientists are working on more environmentally-sustainable fireworks. They are working to replace the toxic chemicals in fireworks with less harmful ones. For example, iodine has been found as a good replacement for chlorine.