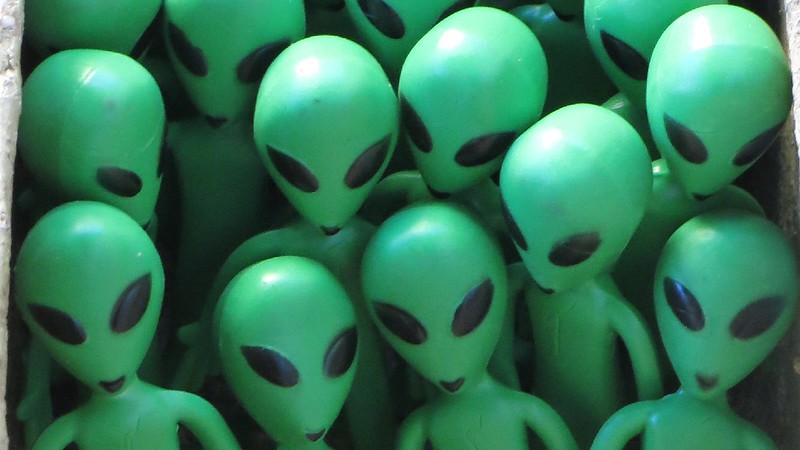 The moon landing was a hoax. There are no stars in the photographs of moon landing, as they were removed by NASA to prevent astronomers from identifying that the photos were in fact taken on Earth. Astronauts couldn’t have survived the radiation, heat and solar flares they encountered, and the footprints in the moondust are highly preserved, despite a lack of moisture. And of course, why is the flag waving in the breeze? ‘Independent experts’ provide some compelling counter-arguments. Verdict: The space kid in me can’t accept it was a hoax.

The Earth is flat. According to the Flat Earth Society, the horizon always rises the meet eye level, bodies of water are flat, and there are no visible curvature of the Earth, even from aeroplanes. Instead, the Earth is actually a flat disc, with the North Pole at the centre, and we haven’t found the edge of the Earth yet because we keep circumnavigating the North Pole. Also gravity is false, objects just fall. Verdict: not convinced.

Aliens are real and Area 51 are hiding the evidence. Evidence in support: various grainy photos of UFOs; in 1947, the US military stated that a ‘flying disc’ crashed near Roswell, New Mexico, to later retract this statement and claim it was a weather balloon instead; they all got pretty nervous about us storming Area 51 earlier this year. US Senator and presidential candidate Mike Gravel claims that the US government is covering up evidence of “extraterrestrials.” Arguments in opposition: pretty difficult to organise an international cover-up spanning multiple decades. Verdict: they’re definitely hiding something, but probably not aliens.

HAARP causes extreme weather events. The High-Frequency Active Auroral Research Programme is weaponising the weather and has been used to trigger various floods, droughts, earthquakes and hurricanes. May also be a mind-control device. Weather experts say it’s not powerful enough to control the weather, but of course they would. Verdict: I don’t want to think about it.

Bigfoot is real. The evidence of this one is mixed. As well as dubious sightings and photos, a two-metre, 230 kg Bigfoot corpse was found in woodland in northern Georgia, but it was later revealed to be a rubber ape costume. Then in 2011 a group provided DNA evidence of a North American sasquatch species hybrid, which is a mixture of males from an unknown Hominin species, and female Homo sapiens. These findings were published in the scientific journal ‘DeNovo,’ but it seems that this journal was set up just to publish the results of their study. In 2013, the International Commision on Zoological Nomenclature accepted Homo sapiens cognatus as the species name for Bigfoot, stating that it is not their responsibility to determine whether Bigfoot is real or not, just that the description is of a new species. Verdict: legendary primatologist Jane Goodall believes it, and who are we to argue with her.

Phantom Time Hypothesis. Roman Emperor Otto III and Pope Sylvester falsified the 297 years C.E. 614-911 so that their rule would fall at the first millenium. This conspiracy is supported by a lack of archaeological evidence during this time, and the presence of Romanesque architecture in 10th century Western Europe, meaning the Roman era is shorter than we think. But observations of solar eclipses during this time line up, and the whole Anglo-Saxons thing seems legit. Verdict: sounds like something a Roman Emperor would do, but didn’t actually happen.

Vaccines cause autism. There is zero credible evidence supporting this, and perpetuating lies is just harmful and unethical. Verdict: just no.