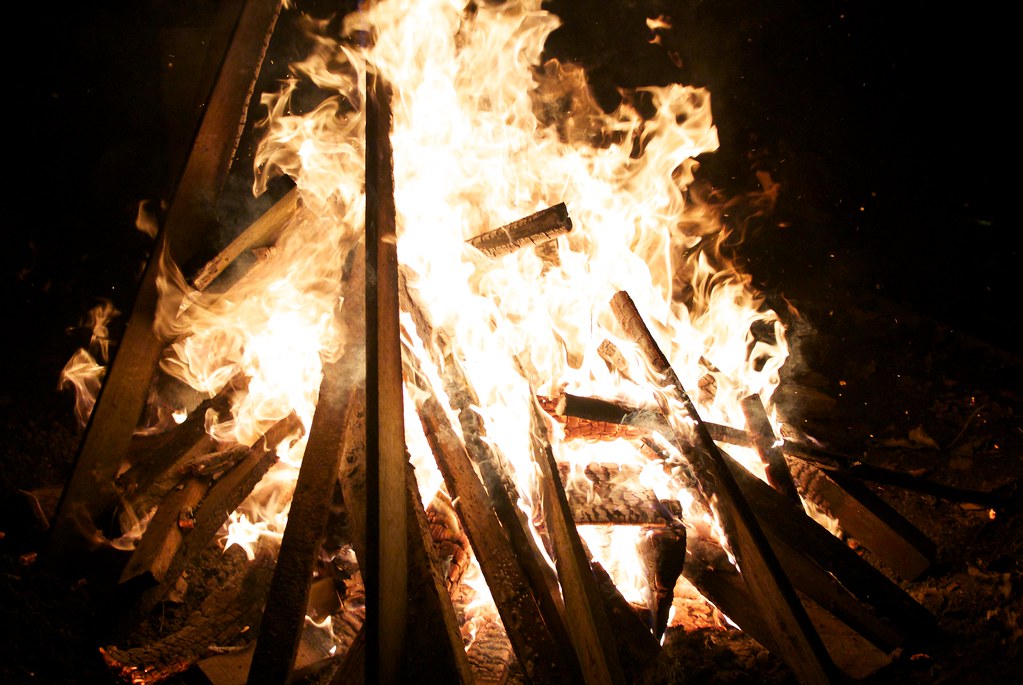 We went to friends for bonfire night. The kids love helping building the bonfire and then throwing more wood onto it.
Features
·10th November 2019

Magdalen College Fireworks – an interloper’s review of a mixed display

As one treks through the vast expanse of Magdalen College’s grounds in the deep dark of November’s winter, one can feel only trepidation. But for what? For feral deer leaping out of the dark? For the hidden banks that come out of nowhere and slide you down into a cold, chilly Isis?

A blazing inferno around which the students huddle

No, in fact for the Magdalen College fireworks, delayed half a week due to weather, but promising a 15-minute burst of light, joy, and childish wonderment. I will begin by confessing myself to being an interloper, a foreigner infiltrating the college of Wilde thanks to the good graces of a resident, while making sure to bring a possé with which to defend myself should the locals realise my deception. We brought with ourselves provisions of an alcoholic nature to ensure that should the quality of the fireworks be lacking, we were able to enjoy ourselves nonetheless. Unfortunately, they were required.

When one walks onto the Magdalen Sports Field, a flickering bright light appears on the horizon, and its orange glow steadily grows, revealing itself to be a blazing inferno around which the students huddle. The sense of community this huddle brings must appeal to students at the college, but as an impartial observer all this brings is an inordinate queue for mulled wine, and a wall of people before the flames that blocks both the light and the warmth; marks deducted. This may appear tangential to any review of the firework display itself, but atmosphere must always be accounted for at any occasion such as this.

So, onto the fireworks themselves. Magdalen had an interesting innovation that I haven’t seen in my many other displays which I thoroughly approved of; a warning firework to let everyone know it was about to begin. It was a shame this occurred 10 minutes after it was allegedly supposed to, but was an innovation nonetheless. The remainder of the 15 minutes of pyrotechnics were unfortunately far less innovative…

A good fireworks display should bring shock, joy, and wonderment to its observers, inspiring the mind to construct a story around it, transitioning through chapters and sections with ease and grace. However, Magdalen’s fireworks were unable to weave a narrative even remotely matching that of their illustrious literary alumni, but instead jolted through the hastily pasted together creations of what appeared seven different writers, none of them with much beyond GCSE level English literature.

I won’t deny that the fireworks themselves were attractive – the pop’n’cracklers, the big bursts, the whizzers of this colour and that – so all praise to the organisers for their taste, buying only the finest ingredients. But when they are put together to fire metronomically one after the other, any physical attraction to the fireworks – and yes, one does need to be attracted to them in that way for it to be a good display – is nipped in the bud.

A good fireworks display should bring shock, joy and wonderment to its observers.

When pauses between fireworks are so long that applause begins, you haven’t performed a firework bait-and-switch to shock the audience that you’re not done; all you’ve managed is to drag it on for longer than it perhaps needed to be, making people disappointed rather than surprised to see new fireworks. A rhythm was simply not developed, with the dynamic tricks that were attempted failing. The greatest entertainment was given by one prematurely exploding near the ground – never a good sign for a fireworks display attempting to wow with coloured aerial explosions.

As mentioned, the fireworks themselves were of high quality, and flashes of excellence were visible – especially when the concept of merging the firing of multiple types of fireworks together was occasionally grasped. So it shouldn’t be difficult to craft a more impressive display. Much like many of my first-year essays, had it been tightened together, it may have appeared more cohesive, fluid, and coherent. But I suppose that much like my essays, the organisers felt the need to pad out their content, which resulted in the sloppy and disjointed end result.

While an overall none too bad evening, the Magdalen fireworks were unfortunately unable to live up to the high promised expectations.

With long queues for mulled wine and a pyrotechnic display that felt minorly disjointed, the evening could have been better, being saved by the quality of the individual fireworks themselves, the impressive inferno of a bonfire that was whipped up at the core of the event, and of course the presence of pre-packed cider – truly the saviour of any Oxford event.