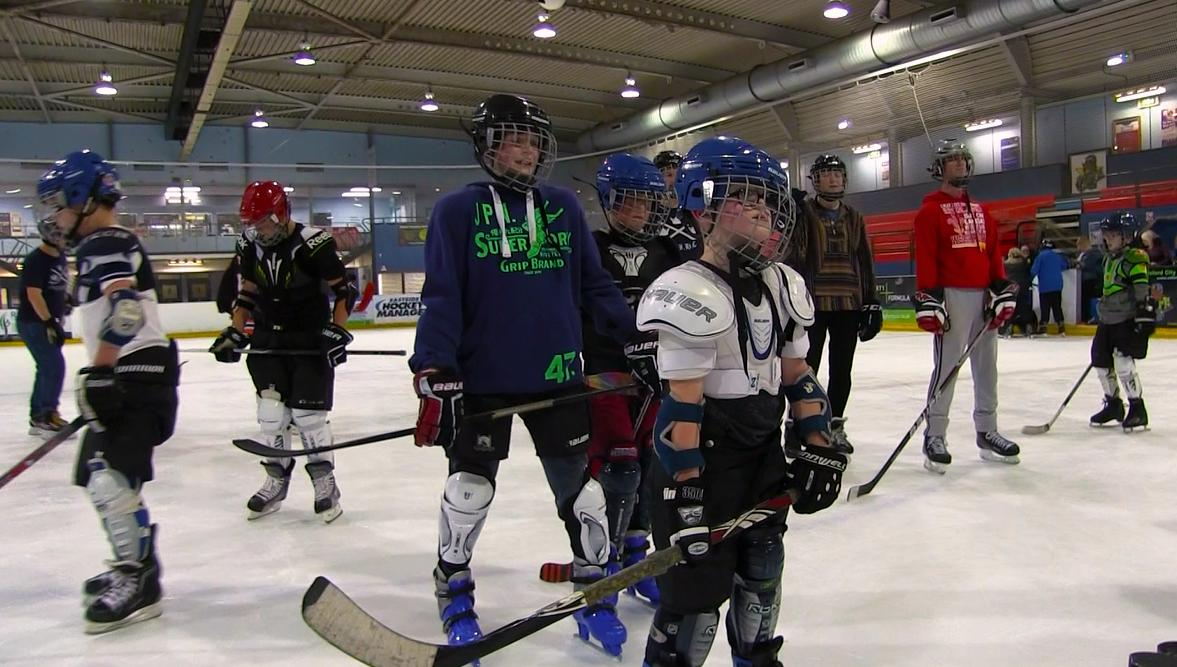 The scraping of ice, the clatter of sticks, and the raucous bells of a charging herd of cows? This is the soundscape of Blind Ice Hockey, the world’s fastest team parasport for the visually impaired, that was co-hosted this month by the Oxford University Ice Hockey Club. It was the second time ever that the sport had been played in the UK, following the great success of its launch at Planet Ice Widnes on 14th September.

Blind Ice Hockey, or hockey sonore as it is known in French, has national teams in Canada and the USA, with around 400 regular players across North America. The sight of the visually impaired players ranges from legally blind (or 20/200 corrected vision) to entirely blind, with goalies typically having the least vision on the team; Most of them have no vision whatsoever.

To aid the players, a handful of small changes have been made to the game. Chiefly, the sport is non-contact and skaters play by listening out for a scaled-up puck that rattles across the ice. A regular puck’s size makes it difficult for visually impaired players to spot, so the new, adapted puck is nearly twice the size of the standard, vulcanised rubber one. Crucially, the adapted puck is a hollowed-out steel drum that contains twelve ball bearings. As it skips across the surface, whacked by sticks and smacking into walls, it jangles and clangs. The racket echoes throughout the rink, bouncing around the confined space between boards and ice. Skaters will bang their sticks against the ice to signal a pass, and the referee’s electric whistle lets the goalie know when the first pass has been made in their half of the rink. Another slight change is the custom 3-foot-high nets (instead of a regular 4-foot net) that require the puck to be kept low and near the ice to guarantee that it will make the noise required for it to be tracked aurally.

Blind Ice Hockey UK was founded by OUIHC player Nathan Tree. At the age of 19, Nathan was diagnosed with retinitis pigmentosa, a degenerative disorder that causes the permanent loss of vision. The condition affects Nathan’s central vision, some of his peripheral vision, and has greatly increased his sensitivity to light. ‘When my vision made it too difficult to play, my partner told me that that wasn’t a good enough excuse and [I] found the Blind Ice Hockey community in Canada and America, and they said come out and play.”, Nathan said in an interview with The Oxford Student. After travelling back and forth between the US and the UK for two years, Nathan recently established the UK’s own Blind Ice Hockey association.

The session held at the Oxford Ice Rink attracted 10 new blind hockey players from across all ages- for many attendees it was only their first or second time on the ice. OUIHC players also took to the ice to act as guide skaters, supporting and teaching the beginners and filling in places for the mini-games. Local ice hockey club, Oxford Junior Stars, provided equipment for the event. The next Blind Ice Hockey UK sessions will be held in December and January, in Birmingham and Basingstoke respectively, with a planned return to Oxford in Hilary Term 2020.

OUIHC’s Treasurer, Michael Newsome, one of the main organisers and promoters of the event, told the OxStu “As a club, we couldn’t fail to notice Nathan’s enthusiasm for blind hockey and were more than happy to help support the growth of the sport in the UK! We’re also pleased to say that we’re now part of the accessible sports programme here at Oxford and would be really keen to help any other aspiring visually impaired players to get into the sport.”

Eight national teams are required for the sport to apply for Paralympic status- and with interest growing in Sweden, Finland, Russia, and even Australia, the future of this new sport is very exciting.