Over 50 people turned out in the pouring rain last Saturday, 9th November, to mark the passing of 150 days since the first protests in Hong Kong, and to show their solidarity for the cause. Protesters held posters with the well-known slogan “Liberate Hong Kong, Revolution of Our Times” and gave out leaflets to passers-by, calling upon the British public to send a letter to candidates standing for the next General Election to declare their support for Hong Kong’s democracy movement.

The organisation Oxford Stands with HK, who organised the rally, believe that the majority of people in the UK stand in favour of democracy and liberty in Hong Kong and need to express this to those sitting in Westminster. This is particularly important since the UK government is in a unique legal position whereby it can declare that China has breached its commitments in the Sino-British Joint Declaration, for which Oxford Stands with HK argues “there is an overwhelming case that it has”. They further highlight that the British public can help the cause by signing online petitions and boycotting companies which have engaged in the censorship of the situation in Hong Kong such as TikTok and Blizzard.

Since 9th June Hong Kong has become the frontier for global democracy and liberty through its protests against the introduction of an Extradition Bill which would have opened the door to Hong Kong residents being extradited to China. While the complete withdrawal of the Extradition Bill has been the key demand of the protest, and this was achieved after 3 months of protest, Hongkongers are now calling for a withdrawal of criminal charges against all protesters and an investigation of the abuse of powers by the police via an independent commission.

This is not the first rally in support of the situation in Hong Kong in Oxford, with one being held last June towards the beginning of the protests. Since then there have been many across the UK in numerous cities and universities. Oxford Stands with HK argues that there has been some progress, for instance some MPs have recently launched a cross-party group to promote democracy and challenge human rights abuses in Hong Kong, and speeches were also made in the House of Lords drawing attention to the worsening situation in Hong Kong. However, they believe that “much more can be done by the government here to hold China accountable for its actions”.

The rally on 9th November is, however, different from previous rallies since it was also held in memory of Chow Tsz-Iok who died on the 8th November from injuries sustained near police operations. A moment of silence was held for the 22-year-old student from the University of Science and Technology who was the first fatality due to injuries sustained during the months of protests. “We were all incredibly saddened by news of Chow’s passing, which we believe underscores the precarious situation Hong Kong is in right now.” said L, one of the student organizers of Oxford Stands with HK.

It is thought that this death will provoke more unrest in Hong Kong, and the changing sentiment is already evident from the fact that since Chow’s passing, the popular protest chant “Hongkongers, Resist!” (香港人，反抗！) has turned into “Hongkongers, Revenge!”. (香港人，報仇！).

Dispatches from a hurricane-torn New York 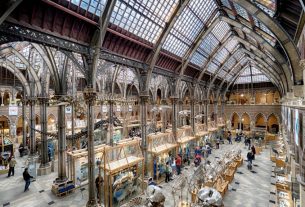