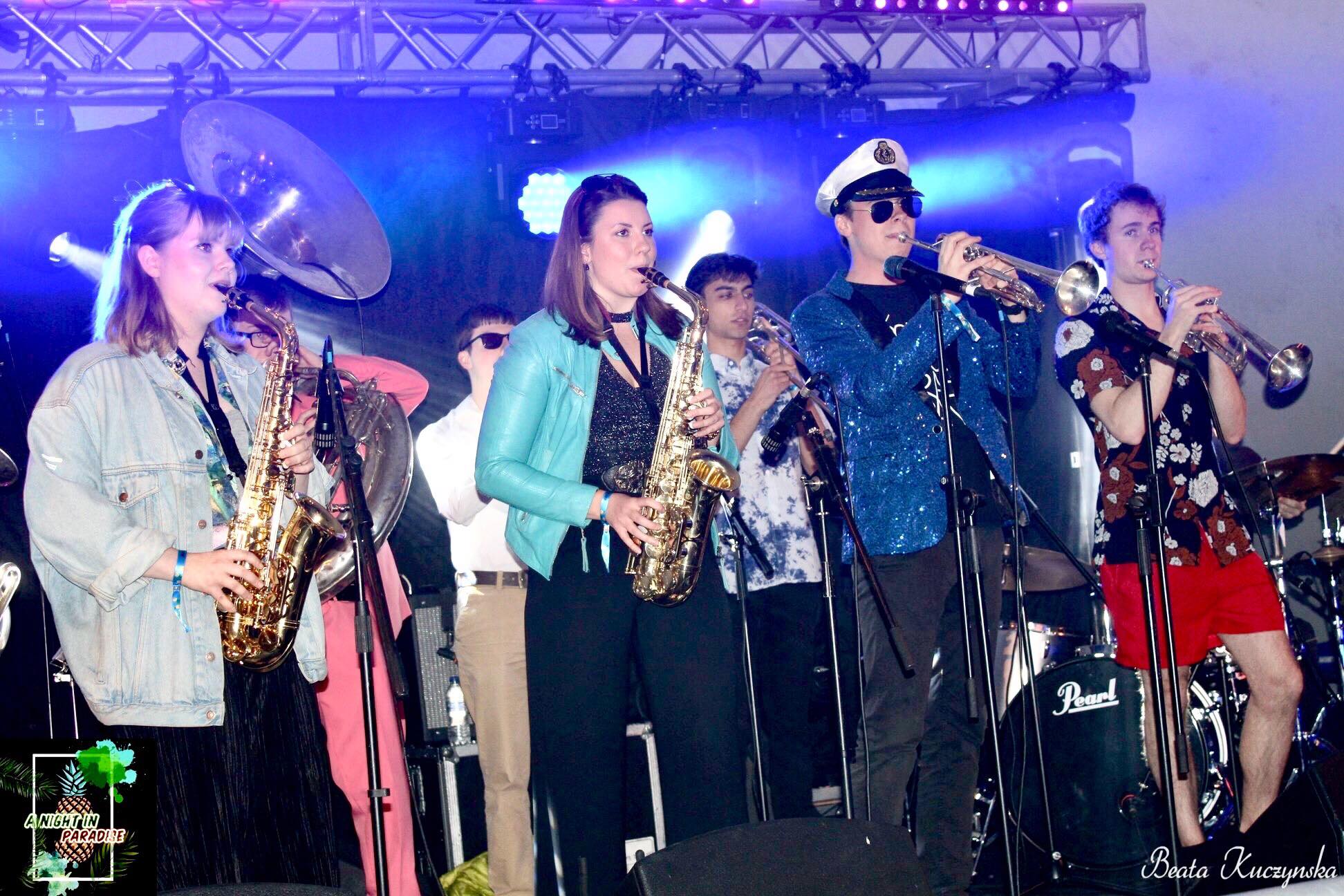 An eclectic celebration of jazz and funk

Friday night brought us a celebration of all things jazz and funk, with The Red Brick Jazz
Sextet, The Donut Kings and Rough Edge Brass Band offering up an eclectic mix of jazz
standards, pop arrangements and timeless classics.

First off, The Red Brick Jazz Sextet brought us some upbeat numbers which featured two
saxes, a trumpet, two guitars, kit, piano and vocals. These guys had a great groove and their
outfits were particularly eye-catching – apparently they had thrown bleach at some cheap
black shirts to create a reddy-black pattern that was very effective. As the first act of the
night, there were a few technical issues with feedback and balance of amps which was a
shame, but the audience seemed to love their character, particularly with the comedic
introductions from their pianist and singer.

What was especially enjoyable about their actwas how much fun the performers were having which made it so much easier to sit back and soak up their set. Anyone who enjoyed these guys should look out for them at the upcoming Merton ball!

The Donut Kings provided a huge contrast to the sextet, with seventeen members in total.
Perhaps the most impressive part of their performance was their virtuosic soloists, with Ned
Ashcroft on trumpet doing an immensely exposed and difficult solo piece being a highlight.
There was also an astonishing kit solo, some gorgeously sexy vocal solos, and some
screaming high notes from the trumpets which I enjoyed immensely as (albeit, a slightly
biased) brass player.

A particularly funny part of their act was when the pianist swapped out
with another player, and then they both played and kept switching positions at the piano,
apparently for no reason other than for a laugh. Danny Riley provided some support up at
the front where necessary, but the cohesion of this ensemble was exceptional given they
tackled some tricky rep with some complex rhythms. Their balance was also very good
considering the number of players and lack of a director.

Rough Edge Brass Band finished off the night with a bang, playing more of the classic sing-a-
long hits than the other bands. The energy of the group was incredible, with the saxes
dancing away in their own little unit, and their brass players at the front partying
throughout. Their sousaphone player, sporting a wonderful pink jacket, did some impressive
solos, as did their lead trumpeter, Alex Toal, who not only wore a sparkly blue jacket but
also sparkly gold leggings, providing us with perhaps the best array of outfits. Some of the
players swapped out between pieces which I think was a wise decision balance-wise as
things got very loud in what is a relatively small hall, but it was a shame that the band
couldn’t all join in with each number.

I also found some players dominated as some of the trumpets were stood behind the front row, so weren’t easily visible or audible. The highlight of the evening, however, had to be when the band got everyone up and dancing and then came and played on the dancefloor amongst the audience – what a fun end to a gig!

It was nice to have the three bands paired together as it provided some variety whilst also
meaning the audience was pretty big, although longer breaks between acts and maybe
more dancing could have helped get the audience more enthused. Overall, a fun night that I
would highly recommend to anyone looking for a relaxed evening out with friends.