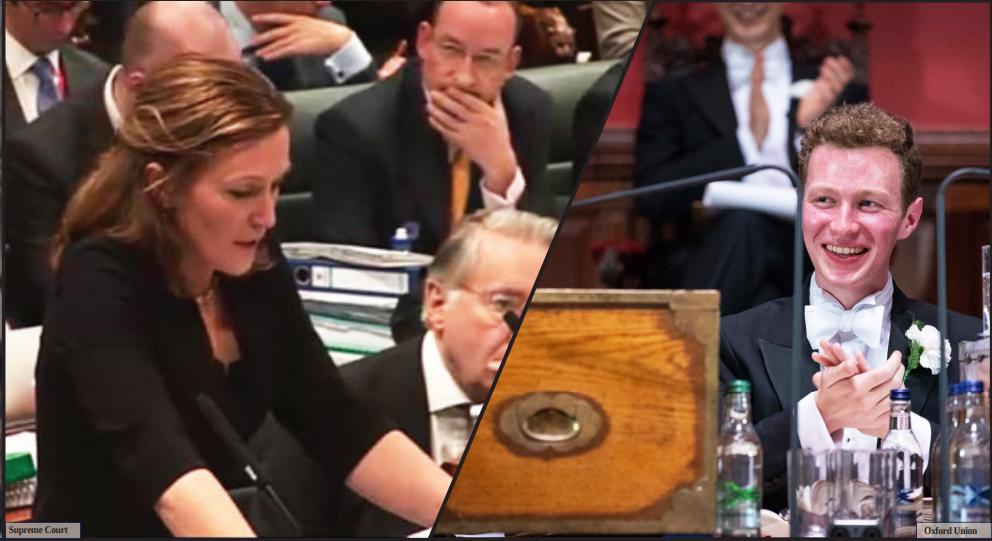 UPDATE: This article has been changed to reflect the withdrawal of a complaint against ex-Returning Officer Harry Samuels

The ongoing dispute over the suspension of a blind Union member involved in an altercation in first week’s No Confidence debate is set to take a dramatic turn as the Principal of Mansfield College, Helen Mountfield QC, is to represent him at an appeal tomorrow and bring fresh charges against the society’s president, Brendan McGrath.

Mountfield is a high-profile barrister and expert in human rights law, having recently represented activist Gina Miller at the Supreme Court in the landmark Miller v. Secretary of State for Exiting the EU case which forced the government to grant parliament a vote on triggering Article 50.

Meanwhile, Oxford Africa Society promises to picket today’s lecture at the Union by Theresa May in protest of the Union’s treatment of the member, who is also a member of AfriSoc. Mountfield took up the case after the member was suspended by an ‘Intermediate Disciplinary Committee’ (IDC), consisting of recent Union officials. The committee was called to face charges brought by McGrath that he had committed ‘violent conduct’ when Union staff forcibly removed him from the Union’s debating chamber after he had been found to be sitting in a seat reserved for committee members. McGrath’s case argued that he had brought the Union into disrepute when he appeared to resist attempts to force him from his seat.

The IDC found the complaint to be upheld. Mountfield stepped in to become his representative, leading the blind member to appeal the case to be heard by a ‘Senior Disciplinary Committee’ (SDC), composed of older former officials and including at least one qualified lawyer. In addition, Mountfield and the member have submitted their own complaint against McGrath, alleging that he was responsible for staff misconduct toward him, and failed to fulfil his obligations to disabled members under the Equality Act 2010.

Mountfield’s complaint, which was sent to The Oxford Student, puts forward a number of claims against the committee including alleged laughter at the removal of the blind Union member.

The original complaint suggests that the chair of the IDC, former Returning Officer Harry Samuels, was compromised by his relationship to McGrath and seen laughing over Azamati’s removal from the chamber.

Samuels disclosed that he had been present at the No Confidence debate only at the start of the IDC’s hearings. He did not mention to the defendant or his representative, St John’s student Lachlann Hinley, that he was present as the personal debate dinner guest of McGrath. Guests at Union debate dinners are treated to a free, three-course meal with wine and port.

Moreover, Mountfield claims Samuels was seen laughing when a member raised a point of order about the member’s removal during the debate. The Oxford Student understands that video evidence exists to support Mountfield’s claims.

McGrath’s written acknowledgements on the back page of the Union term card include a dedication to “HS, for keeping me out of trouble”. Union insiders understand this to refer to Samuels.

During hearings that took place on Saturday 16 November, the complaint against Samuels was withdrawn.

Samuels told The Oxford Student: “All allegations made against me have been fully withdrawn by Mr. Azamati, and there were no findings whatsoever of any wrongdoing on my part. The original disciplinary panel considered the evidence put before us at the time, and expressly made several recommendations about how the Union needed to improve its policies towards disabled members. Since then, new video evidence of the incident, which the panel did not have the benefit of seeing, has also come to light. On the basis of it, the complaint was withdrawn and Mr. Azamati’s suspension was overturned.”

The new case against McGrath detailed in the complaint charges him with a number of disciplinary offences. Mountfield argues McGrath, as president, was “principal responsible for actions of security guards acting as agents of the society”, arguing that “normal principles of vicarious liability” apply, which render employers legally liable for offences committed by employees while carrying out their duties.

The security guards “subjected [the member] to unlawful assault in pulling him by the legs” and removed him from the chamber “in a way which could not reasonably be justified as necessary”, depriving him of his right to use the society’s buildings enshrined in the rules.

Mountfield also raises the possibility that he was subject to “unlawful disability discrimination” as well as “unlawful race discrimination”, inviting the SDC to “infer from all the evidence that [a] white blind man would not have been treated in the same way he was”.

Oxford Africa Society published a statement on Thursday condemning the “violent, unjust, inhumane and shameful” treatment of the member by Union staff which resulted in “physical, emotional, and psychological trauma” for him.

They then called for him to consider resigning, and will be holding a protest at 5.30pm today, promising to “protest until our demands are met”. The protest will take place as Union members gather to listen to Theresa May give the inaugural Benazir Bhutto lecture in the chamber.

Mountfield subsequently alleges McGrath is guilty of “dereliction of duty” directly, by failing to put in place adequate provisions for disabled members at events or ensure adequate anti-discrimination training was given to staff as is required under the Equality Act 2010. Under the Union’s constitution, obligations set by UK law take precedence over any other rules of the society.

Mountfield’s complaint also includes the dramatic statement that she is bringing her complaint within the Union’s disciplinary framework in order “to avert, if possible, the need to bring legal proceedings against the officers of the Union Society for assault, breach of contract, disability discrimination and race discrimination”.

Tomorrow’s SDC will have to consider the possibility of an escalation to the courts if it decides to rule in McGrath’s favour.

A publicly available document listing the motions passed in the meeting says that, after the meeting went ‘ex camera’ (allowing proceedings to be published), a motion that “authorises the necessary expenditure relating to the President being represented in the discussed case” was passed unanimously by the committee. The Oxford Student understands from multiple Union sources that the “discussed case” refers to the suspension case.

This is not the first scandal to hit McGrath’s controversial Union career. He has faced two unsuccessful allegations of electoral malpractice, including one implicating him in submitting forged documents to the Returning Officer, and is the only Union officer in history to have faced an impeachment vote, after he overturned a ban on election slates just weeks before his election as President in Hilary 2019 for which he had organised a slate, ‘Together’.