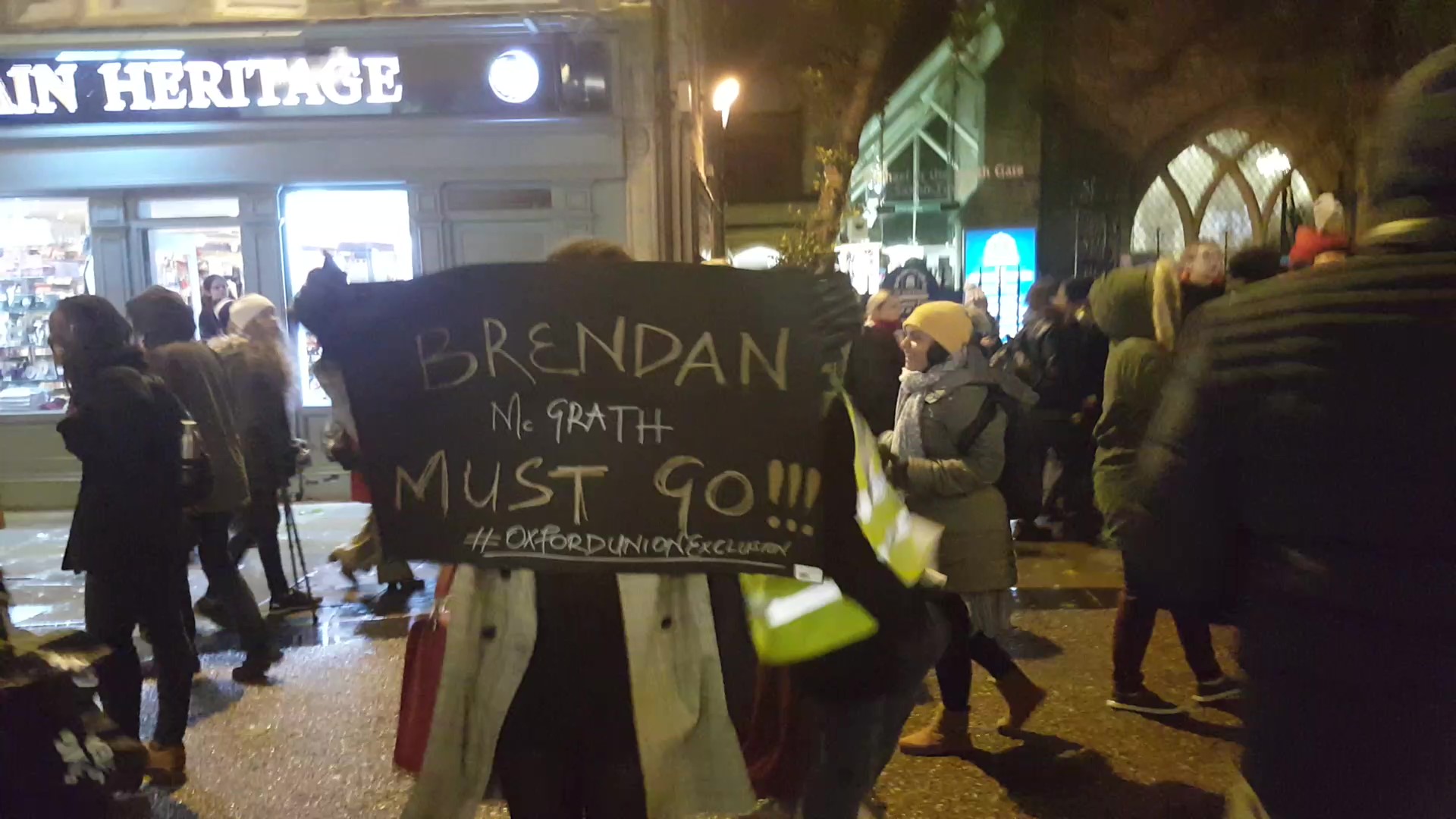 AfriSoc launched the campaign after a Union disciplinary committee suspended the membership of Azamati, who is blind, for “violent conduct”. This related to incident when Union staff physically dragged him out of first week’s No Confidence debate after they had instructed him to leave his seat, claiming the chamber was full.

In a statement published on Wednesday, AfriSoc condemned the “terrible treatment meted out to Azamati”, saying further: “The manner in which [Union president] Brendan McGrath and the Union have handled this matter is inhumane, not least given the dignity of an individual at stake. AfriSoc is deeply concerned by the physical, emotional and psychological trauma Mr. Azamati has had to endure in the past few weeks due to reckless leadership on display at the Oxford Union.”

The statement’s four demands were repeated by leaders at Friday’s protest. These include a public apology from McGrath and the Union, the reinstatement of Azamati’s membership, “adequate punishment for the security personnel who assaulted Azamati” and compensation for him. Their statement had also asked McGrath to “consider his position” as president, but protesters yesterday made very clear that their position had hardened to demanding his resignation outright.

Protesters chanted slogans, sang songs, and listened to speeches outside the Union’s St Michael’s Street entrance from 5.30pm, as Union members gathered inside the society’s debating chamber to listen to an address by former prime minister Theresa May.

Chants included “Hey, hey, ho, ho, Brendan McGrath has got to go”, “Down, Brendan, down” and “Ableist Union”. Among those to address the protest was Femi Nylander, a leading activist from the ‘Rhodes Must Fall’ campaign against statues of colonialist Cecil Rhodes in Oxford. Notably, Nylander, who is black, had been at the centre of a racism controversy at Harris Manchester College in 2017 when the college had circulated CCTV images of him inside the college with the warning to “be vigilant” when he had simply been photographed visiting a friend. Speaking to protesters, he condemned “a constant stream of [racist] behaviour, both from the Union and the University”.

As Union members left the May talk at 6pm, they were faced by protesters’ placards announcing “We are not safe here”, “Justice for Azamati”, and “Brendan McGrath must go!”.

After this, the protest headed to Cornmarket, where singing and dancing took place.

The Oxford Student spoke to several individuals present during the events. One protester, naming himself as Roger, said: “It is so sad that we are still securing just the basic right of someone to be treated equally and with equity, as any other member would deserve from this Union.”

A member of the Union who had attended the May event, Will Nation-Dixon, described the sounds of the protest from inside the chamber as being like the “cheers and whistles you would hear outside a football stadium”. When the protest started around halfway through the event, he described May has “looking around” in confusion but did she not address the commotion herself.

AfriSoc’s protests will be followed today by a disciplinary case brought against McGrath for dereliction of duty related to the suspension case. The case has been brought by Azamati, but he is being represented by the principal of Mansfield college and noted human rights lawyer Helen Mountfield QC.

Another case is being brought against the chair of the disciplinary committee that had originally suspended Azamati, Harry Samuels. He is being accused of bias due to his undisclosed personal friendship with McGrath, including the fact that he had attended the No Confidence debate, where he witnessed the removal of Azamati, as the personal dinner guest of McGrath.

Multiple Union sources have suggested that McGrath may face a motion of impeachment as a result of the scandal, but The Oxford Student has not been able to independently confirm this. McGrath was the first Union officer ever to face a motion of impeachment, when he served as librarian and was a candidate for president in Hilary Term 2019, but which he defeated in a landslide vote.

Oxford University Africa Society president Nwamaka Ogbonna told The Oxford Student: “We are thankful to the 100+ people who came out to protest. Our protest was to send a strong message to the Union that it is unacceptable for anyone to be treated in such a violent manner irrespective of race, nationality, gender or ability. This is just the beginning of a demand for justice, we will not relent in ensuring that the Union and its President publicly apologises; Azamati’s membership is reinstated; the security person is punished; Azamati is compensated and Brendan McGrath resigns for his absolutely reckless leadership!”

The Oxford Union and Brendan McGrath have been contacted for comment.

The music of a people who will not be slaves