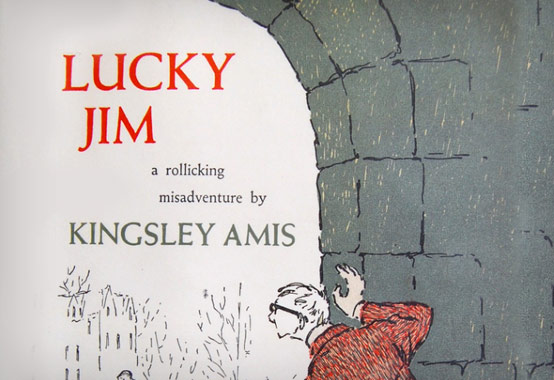 Amis’ debut novel stars Jim, a bitter little man who is lost in life. Jim feels out of place of the
profession that he has chosen for himself, which is namely academia. As a professional historian who
hates history, Jim ultimately feels trapped by everything and everyone around him. The
claustrophobic environment of the unnamed university and college system aggravates his torment,
since he is forced to interact with the same people who he despises on a daily basis, as well as being
kept on a treadmill of deadlines.

The whole novel is about Jim’s attempt to escape this feeling of claustrophobia by solving all of these
problems. At the start, Jim wants to impress his superior Ned and get a position, as well as break off
his troubled relationship with Margaret, his long-time girlfriend. That, he decides, is what will make
him happy. All that he thinks that this entails is a bit of endurance. However, such a task turns
Herculean in nature, as he is farcically made to endure many trials.

Faced with this suburban torture, Jim really does try to retain a stiff upper lip. But he really just
cannot manage it and he ultimately becomes a child trapped in a man’s body. Can’t stand your
superior’s party? Run away to a pub and get drunk. Can’t stand the sound of your faculty head
talking? Imagine kicking a rock in his face. Can’t empathise with your girlfriend, but can’t cut off the
relationship? Get drunk. On the one hand, it is blissfully refreshing. Amis denigrates man to a sort of
animal; underneath all of the intellect and the smarts of a university lecturer is just pure unbridled
emotion. Amis dares to write out what we all instinctively want to do first when we reach any sort of
trouble.

Jim, unable to help himself from enacting his worst impulses because he is drunk, releases all the
tension of the suffocating claustrophobia built up throughout the novel. In the final scene, he gives a
lecture that becomes a drunk monologue, as he gives up on getting the position; in the first cathartic
moment of the novel, he, or perhaps Amis himself, gets everything off his chest about the
pretentiousness of the world of academia. There is something quite bitter behind all of his criticisms,
and the book at times treads the line between the funny and the caustic quite precariously.
So far, no harm no foul. What is concerning are the attitudes presented towards women, not by Jim
but by Amis himself. A moment of freedom for Jim is when Margaret is revealed to be a pathological
liar, who has faked suicide attempts and seizures to ensure that Jim is guilt tripped into staying with
her. By revealing the truth, which has been given to him by a previous boyfriend, Jim is free to
abscond with the love of his life, Christine, who he has prised away from Bernard.

Even writing this, this part of the story does not make much sense. Margaret’s motivations are never
really explained and Amis uses the trope of “women are emotionally unstable”, or what I like to call
the “hoes mad” trope, as a deus ex machina to explain Margaret’s actions. Such an attitude towards
women and mental health have obviously dated poorly. Moreover, Christine is only willing to
abscond with Jim if he cuts off ties with Margaret, which portrays her as implicitly insecure. It could
also be that Amis’ implicit view is that it would be improper for Jim to have a relationship with
Christine if Margaret is still in the picture, even if she is only a friend or confidant.
This is only infuriating because all of the secondary male characters, as well as Jim, are well
constructed; all female characters exist as objects of sexual desire and neither Christine’s nor
Margaret’s characters are ever developed in a meaningful way other than impediments or rewards
to Jim’s life.

The worst bit about this is that the story would have made perfect sense without either of the
female characters. Bernard was so annoying that Jim would inevitably have provoked him for no
reason without the Christine love affair, and Margaret serves as just another shackle to his original
life, of which there are many already.
Yes, the book is funny in that classic English way; Amis relates moments of absurdity where the
characters do not even realise the bizarreness of the situation. And yes, the criticism of the stifling
university culture is biting. But the plot doesn’t really make sense, and the people’s actions are so
convoluted that the ending is truly unsatisfying, at least to this 21 st century reader.