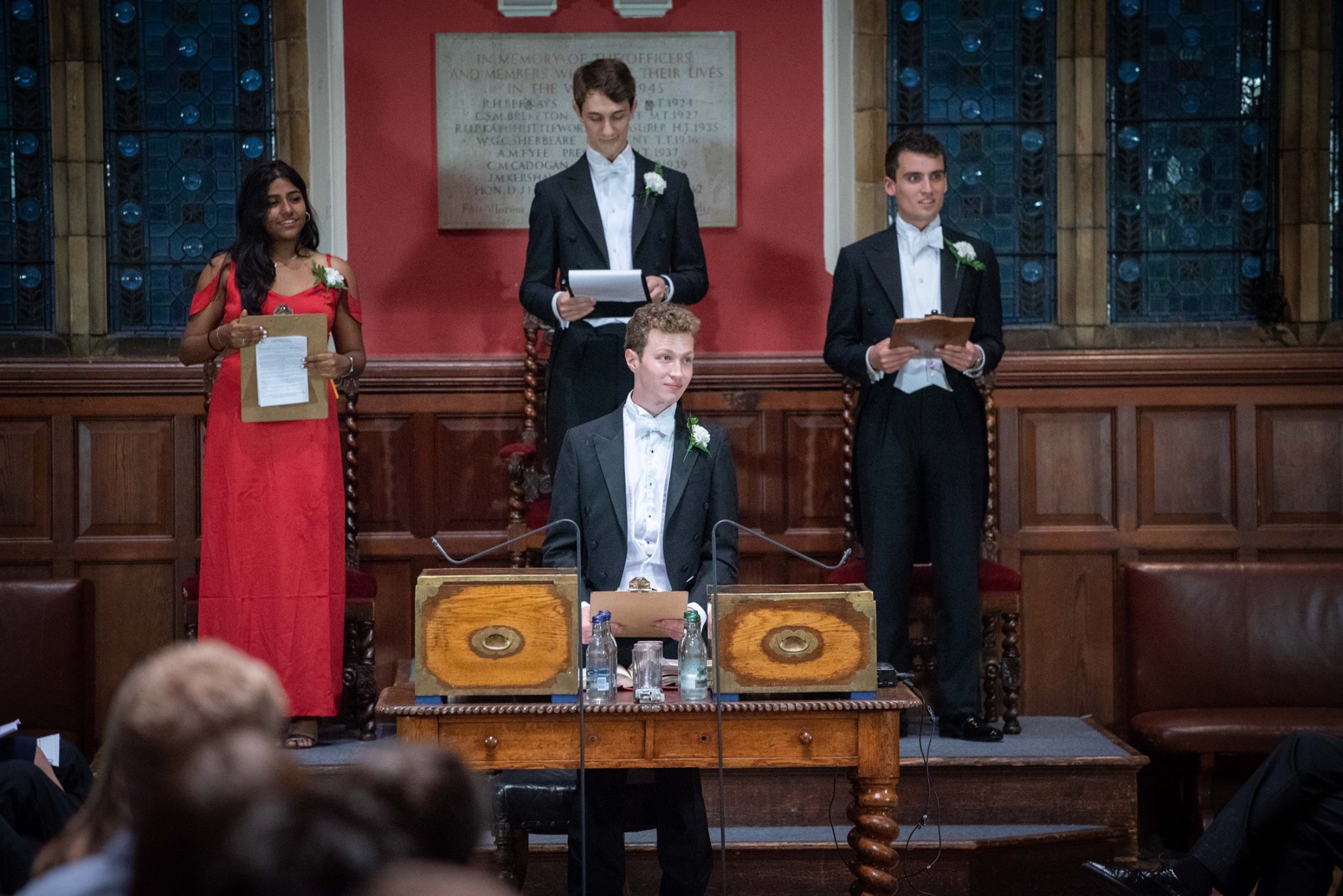 Oxford Union president Brendan McGrath and other members of the Union’s Standing Committee showed defiance to growing calls for him to step down at a meeting dominated by discussions of the Union’s media response to the Ebenezer Azamati scandal.

Despite over 3,600 signatures on Oxford University’s Africa Society’s petition demanding McGrath step down, he defended his conduct and fitness for office in front of fellow members of the Union’s governing body.

In opening remarks on the controversy, McGrath claimed his controversial complaint against the blind Union member, dragged from the chamber in first week’s debate was brought only “on behalf of a member of staff”. He further explained his need to stay in office to conduct “negotiations” with Ebenezer Azamati and his representative, Mansfield principal Helen Mountfield QC, after Saturday’s disciplinary hearings postponed Azamati’s dereliction of duty complaint against McGrath to allow mediation to take place.

McGrath declared: “I am the best person to take this forward with the negotiations.”

He further went on to say about his handling of a scandal that has been growing for almost five weeks: “I think anyone else in my position would be finding it just as hard as I am and I don’t see what they would have been able to do differently.”

McGrath was then grilled by former Union treasurer Charlie Coverman, who condemned the situation the Union has found itself in. He claimed that, as a result of McGrath’s leadership, “the reputation of the Union and all of its members is in tatters” and criticised McGrath’s failure to respond to emailed complaints from Mountfield in the weeks since the original incident.

Responding, McGrath blamed “massive institutional problems with this incident that I can help to address” and denied being “arrogant” in ignoring Mountfield’s early complaints.

When Coverman asked McGrath why, having viewed footage of the Azamati incident, he still chose to bring a disciplinary complaint against him, McGrath claimed he “didn’t have a choice here”, saying that staff had asked him to bring it and that the then-returning officer had led him to believe “it was probability his duty to bring this”.

The Oxford Student understands that no Union rule mandates the president, or anyone else, to bring complaints.

McGrath said further: “It would be exactly the wrong signal to send when we have these institutional problems with the Union for an eight-week president to resign”, recommending instead his proposals for an external audit of the Union’s disabilities policies by the University’s disability advisory service.

Afterward, discussion turned to the Union’s media strategy. Much discussion turned on how to issue a public statement, a final version of which was released on Union social media today. One member, Jeremy Bararia, recommended a “more sincere apology” than that already agreed between McGrath and Azamati after Saturday’s disciplinary hearings.

Further discussion saw members make critical comments of the press, with librarian-elect Spencer Cohen arguing for the publication of explanatory advertisements in local and national newspapers in order “to start retaliating to the bad press” the Union has received in recent days.

He went on to say: “Anything we [the Standing Committee] do is directly undermined by some writers at the OxStu who have a lot of free time and a vendetta against this place and, y’know, the national press, who are also not particularly favourable to our institution.”

At the close of the meeting, Coverman asked the elected members of the Standing Committee if they would support McGrath’s resignation or impeachment.

Joseph Grehan-Bradley and Ellie Flint, both members, said they opposed this, feeling it was “counterproductive”. Harry Deacon, another member, echoed their sentiments by saying “It would be negative to have a change in president.”

Arjun Bhardwaj, another member, stated that he believed “either outcome of” a potential motion of impeachment would be worse than a simple resignation, suggesting he would support a resignation were an impeachment to be inevitable.

Coverman further asked the officers present whether they approved of McGrath’s handling of the situation so far.

President-elect Sara Dube said: “I think that the president is the best person to go forward continuing handling this situation, to continue talking to Mr Azamati and Helen Mountfield because he’s been dealing with it longer than anyone else on committee has.”

Beatrice Barr, the treasurer-elect, declined to comment on McGrath’s conduct so far but said “a resignation and an impeachment would be an unequivocally terrible thing.”

Although no motion mandating a media strategy on McGrath was passed at the meeting, the Union did publish a public statement on the Azamati case today. It reads: “Having properly reviewed the new video evidence and witness statements produced to the Senior Disciplinary Committee, the President of the Oxford Union Society has withdrawn the complaint of violent misconduct, brought on behalf of the staff, against Ebenezer Azamati and apologises unreservedly for the distress and any reputational damage which the publication of this charge may have caused him.

“The findings of the Intermediate Disciplinary Committee of the 26th October 2019 on that charge have been set aside and Mr Azamati is not guilty in respect of any charges brought by the President. His membership is reinstated.

“We are in ongoing discussions with Mr Azamati in order to pursue a solution agreeable to all parties, which addressed the structural issues raised; we do not wish to prejudice those discussions with further comment at this time. However, please be assured that we will be providing further statements and updates at the earliest opportunity.”