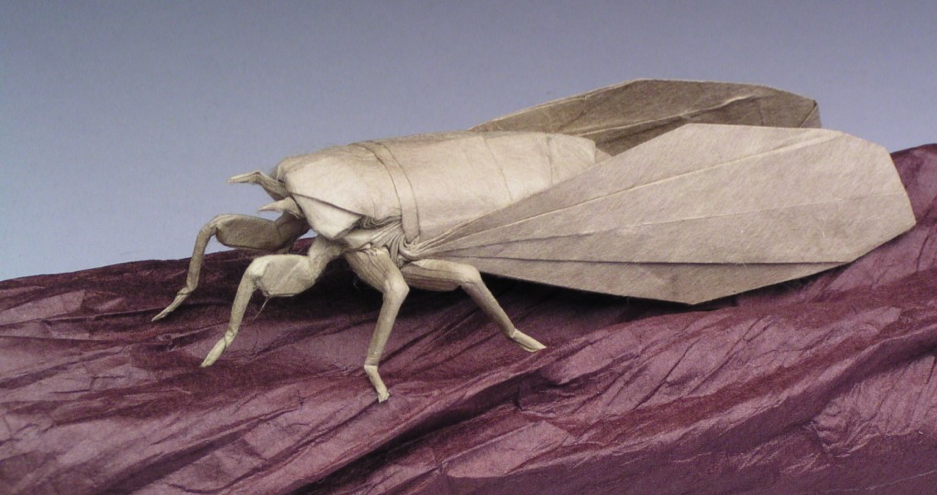 Origami: The art and science of folding

Paper was first invented and manufactured in China around 105 A.D. in the Han Dynasty. It was then brought to Japan by monks, who intended to use it to document religious texts or for ceremonial purposes. As paper became more accessible to the general public, people began to fold it for leisure, particularly during celebrations and festivals. One of the most recognizable examples of this is the paper crane – a symbol of best wishes in Japan. In the late 1800s, the art of paper folding came to Europe but retained its Japanese name: ‘Origami’.

Almost everyone will have tried Origami at least once while growing up. It’s an easy technique to grasp: all you need is an off-the-shelf pattern and a flat sheet of paper, and within minutes that paper is transformed into an incredible sculpture. However, have you ever considered the rationale behind these crease pattern designs? Is it possible to fold a sheet of paper to any sculpture without cut or glue? In the last three decades, researchers have started to answer those questions with mathematical theories – reframing this traditional art as a novel and interesting area of scientific enquiry.

Robert Lang, one of the pioneers in modern Origami theory, learned to fold the paper in school at the age of six. He kept up this habit as a means of easing stress, especially during intensive undergraduate studies in Caltech. Fascinated by the beauty of origami art, he decided to quit his job at NASA to be a full-time Origami artist at the age of 40. Later on, he produced a collection of artworks and, more importantly, completed the proof of fundamental mathematical principles of Origami known as Huzita–Justin axioms.

In addition to these proofs, Robert also developed a computational design tool called ‘TreeMaker’. This computer program abstracts the 2-D shape or 3-D sculpture into a ‘tree structure’, embodying nodes and branches off like a skeleton. Based on this structure, it designs the flap from those nodes, considering underlying geometrical constraints.

Though origami is generally considered an art, it has evolved into a multi-disciplinary subject incorporating aspects of math, civil engineering and computer science. With the aid of new developed special material and 4-D print technology, scientists in Harvard have created the first self-assembling robot in the world using the principles of origami. To achieve this, they first print the static crease pattern onto the special material. After the application of some environmental stimulus, such as heat, liquid, or a magnetic field, the material will change properties and be folded into the sculpture by itself.

Though origami is generally considered an art, it has evolved into a multi-disciplinary subject incorporating aspects of math, civil engineering and computer science.

Origami offers an exclusive way to bypass certain geometric constraints, making it perfect for convertible or space-efficient design. For example, in the biomedical sector, folded titanium endovascular stents are sent through patients’ blood vessels and deploy to enlarge the vessel where the blockage occurs. This operation shortens recovery time for patients compared to existing treatments.

Some special crease patterns can also form extra resilient and elastic structures. Earlier this year, a research group in MIT invented a flower-shaped gripper based on the ‘waterbomb’ pattern: a well-known folding pattern used in constructing foldable cylinders such as stent grafts and deformable robot wheels. In the video demo, this gripper could successfully envelope and lift objects almost in any shape, soft or rigid, and more than 120 times of its own weight.

Those creased structures can be also used for energy absorption. Researchers in Oxford University have experimented with a series of creased structures to make the crush box of a car, which is placed behind the front bumper to absorb the energy during collisions. They found its mechanical behavior is much more manageable than a non-creased crush box. With the same weight but different geometry, the creased design eliminates high spikes in the impact force by absorbing more collision energy.

One of the most prominent origami applications so far is the layout of solar panel arrays on satellites. These arrays are the primary power source for spacecrafts, and therefore their exposed area needs to be large enough to receive a lot of solar irradiance. However, it needs to be folded into a small volume before it is deployed into space due to the limited storage room inside the spacecraft. Researchers are still working on finding the folding pattern that maximizes the deployment ratio of the solar panel array aka the ratio between its surface area when it is fully deployed vs when it is folded. The most conventional method of folding a solar panel array is a ‘zig-zag’ design. The arrays are arranged in rows on the wings of a spacecraft, which can be folded or extended like a ladder. Although this design is robust and easy for manufacture, its deployment ratio is strictly limited.  An alternative ‘fan’ design was used on the Mars rover, in which the solar panel were deployed along the circumferential direction. However, its deployment ratio was still largely constrained due to the radius of the fan.

Researchers then used the principles of origami to generate more complex origami-like ways of arranging these solar panels, including the ‘hub-wrapping’ method. As its name suggested, this design involves folding and wrapping solar panels around a central hub like a cylinder. The deployment ratio of this design is more than ten times greater than that of the ‘zig-zag’ design. However, to achieve such a design, the thickness of solar panels must be carefully considered to ensure it folds perfectly. This poses an interesting problem, as most of the existing origami designs and relevant software assume zero-thickness materials are being used. At present, the Special Structure Group in Oxford University are working on this gap by investigating so-called ‘thick panel origami’. Using computational analysis, they hope to improve current origami design practice to enable the creation of more diverse and compact patterns.

“In the future, origami could be key to resolving the conflict between the population explosion and scarce land resource – one of the most pressing issues in our century,” Jingyi Yang, a second-year DPhil student working on Origami, shared her opinion. In the metropolitan area, a working-class young adult today might only afford a studio that is half size of what his parents used to have. The use of foldable furniture could help utilise the available space much more efficiently. For example, by converting a dining table to a small bar for parties. Perhaps one day, people may even be able to fold their flat into a vehicle at the press of a button and drive themselves away.

The author would like to thank Jingyi Yang for the interview and helps on this article.