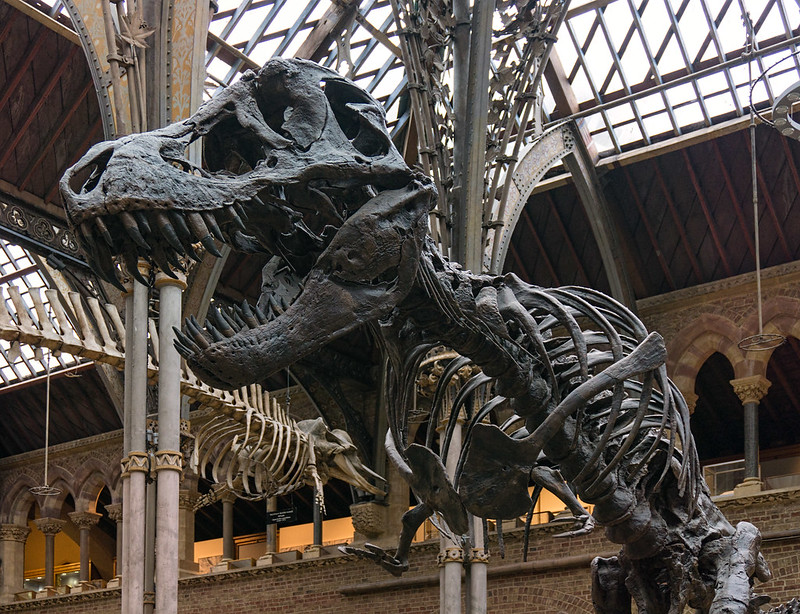 A night at the museum: behind the scenes tour of the Oxford University Museum of Natural History

The Museum of Natural History is one of Oxford’s finest landmarks, housing over seven million specimens in its expansive collection. Last week the museum opened its doors at night to allow visitors to see the ongoing First Animals exhibition with museum director Professor Paul Smith.

The exhibition, which goes on until 24 February 2020, showcases fossils from around the world that give hints as to what the first animals to evolve might have looked like. Most of the fossils are over 500 million years old, coming from the Cambrian period. A variety of bizarre animals are on display, from ancient arthropods called trilobites to animals that lived in tubes buried into the sea floor.

The Cambrian period started 541 million years ago and lasted for 55 million years. It is well known for the “Cambrian explosion”, a time when life rapidly diversified to form all the different animal body plans we see today. Some researchers have suspected that the Cambrian explosion came after an even earlier period of diversification that has not left a mark in the fossil record. Increasing genetic studies seem to support this idea, suggesting that animals started to diversify in the period that came before the Cambrian: the Ediacaran.

The Ediacaran world would have been very different to the present day – trees and flowering plants had not yet evolved and no animal had made the transition to land. If you wanted to find any signs of movement you would have to look in the oceans, where life was making the important transition from single-celled organisms to complex, multicellular animals. These animals interacted with each other in all sorts of ways; some were predators whilst others were filter-feeders or grazers.

The exhibition is the first time that fossils from three geologically significant parts of the world have been shown together; Sirius Passet in Greenland, the Chinese region of Chengjiang, and Burgess shale from the Canadian Rockies. Even though some of these sites are now found in hilly areas at high altitudes, 500 million years ago they would have been covered by the Cambrian oceans and been home to a vast amount of marine life.

The exhibition is the first time that fossils from three geologically significant parts of the world have been shown together; Sirius Passet in Greenland, the Chinese region of Chengjiang, and Burgess shale from the Canadian Rockies.

One bizarre fossil was called Charnia and looked more like a plant than an animal. It was attached to the ground with a stalk and had branches that made it look like a fern. New research, however, suggests that Charnia had the growth pattern found in animals, indicating that was in fact an early animal and not a plant. Charnia would have dominated the Ediacaran oceans, and it appears in rocks that come from a wide range of locations, from Canada to Leicestershire.

The most fun part of the exhibition was the “Cambrian Diver”, a virtual submarine that lets you navigate a three-dimensional simulation of the depths of the Cambrian oceans and learn more about the various animals that can be found there. You can explore the seafloor using a joystick and see how the first animals compare to their modern-day descendants.

Afterwards, we were led through a door to a part of the museum that is normally off-limits to the public. With the smell of preservative chemicals in the air, we were shown trays of insects collected by great biologists such as Charles Darwin and Alfred Russell Wallace, collections that included giant bees, miniscule flies, and shimmering green dung beetles. Prof. Smith explained that the museum has over five million insect specimens and is a globally significant collection.

As a reminder of the museum’s historical importance, the tour ended in the Huxley room, the location of the famous intellectual clash between Samuel Wilberforce, Bishop of Oxford, and Thomas Huxley, a London biologist. In 1860, these two men discussed Charles Darwin’s theory of evolution by natural selection – a topic of great controversy at the time. The ideological battle that followed went on to be called the Great Debate and the room is now used to store around one million pinned specimens that form part of the museum’s extensive collection.

Visiting the museum after it had closed to the public was a special experience, allowing you to appreciate small details in the stunning Victorian neo-Gothic architecture. The museum was built according to the ideas of the art critic John Ruskin and his influence is felt throughout the building. For example, each of the cast iron pillars that hold up the roof is topped with a different plant sculpture made from wrought iron. Each plant is shown in four different stages of its life and exemplifies Ruskin’s belief that the natural world should be the main source of inspiration for architecture.

The museum is undoubtedly an important place in the history of science – the First Animals exhibition takes you back in time to important moments in the history of life itself, putting visitors face-to-face with the 500 million year old animals that ruled the ancient oceans.