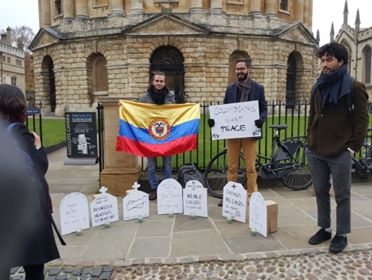 Last week, students outside the Radcliffe Camera protested against the Columbian government.

Alejandro Posada, a postgrad, said there were “multiple reasons” for the strike, including recent “military operations signed by the government a few weeks ago that led to the death of at least eight children”. He stated the government signed off on these military operations, notably a bombing campaign against Revolutionary Armed Forces of Colombia (FARC) in August, knowing it posed significant risk to civilians.

Colombian Defense Minister Guillermo Botero has recently come under pressure to admit to a coverup of the deaths, though maintains the operation “was legitimate” and the military target was never children, as officers were unaware of their presence in the guerrilla camp.

Posada also mentioned the “lack of the implementation of the peace accords signed three years ago” and subsequent growing “unrest and general discomfort by the people”, along with wishes for the accords to be implemented at last.