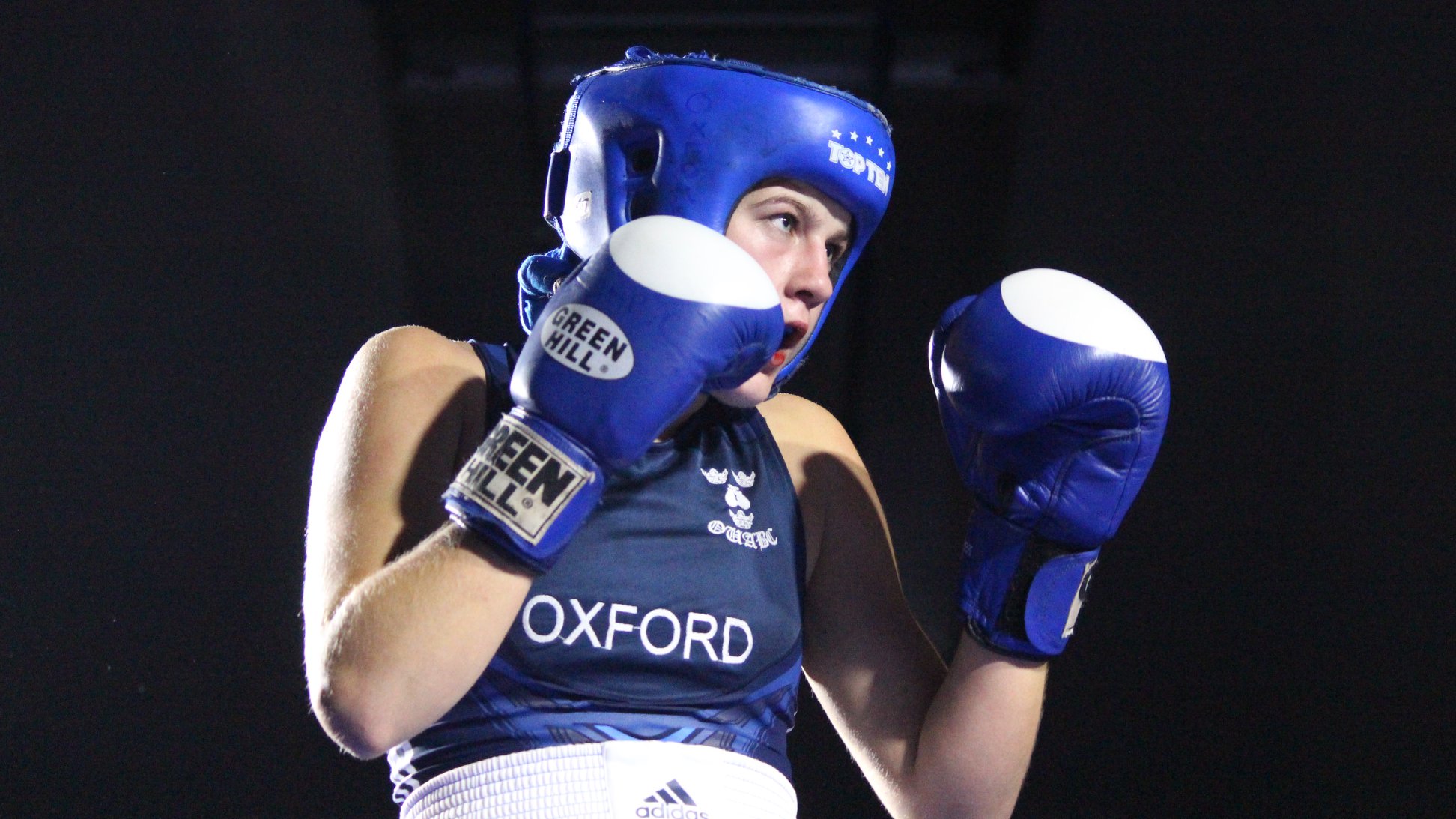 As I walked up the stairs to the GLD I noticed the door tremble as it attempted to contain an ominous thunder of thumps. The scene behind it revealed fifteen girls split between five punchbags, three on each. In each team, one girl would hold the bag in place whilst it was relentlessly assaulted by the other two, jabbing left, right, left, right, and sharply exhaling with each hit. The coach, Dave Mace, shouted encouragement over the raucous rattle of chains, “Come on, come on. Push, push! No sign of weakness! Go, girls! Straight punches, twist! Be strong now, girls! Backhand front and away we go!”

I had been invited to watch the training of the Oxford University Amateur Boxing Club by my fellow Wadhamite, Bella Anderson. The session had consisted of a warm-up of skipping and bodyweight exercises, shadow boxing, technique work, bag work, bodyweight circuits e.g. squats, press-ups, burpees, and finally a warm-down of stretching. Bella and her fellow boxers had been preparing for The Second Inaugural Oxford Women’s Boxing Match that was held on the 16th November, training this way four to five times a week in the days leading up to it. The event was the second of its kind, the first being held the year prior, and is the only university women’s boxing event in the country.

Eight bouts took place across the Saturday evening, starting from a flyweight skills match that ended in a draw. Bella’s match was seventh- she’s in the middleweight class. Her opponent hailed from Telford Amateur Boxing Club. With the ringing of the bell, both boxers dived in on one another. There wasn’t an ounce of hesitation to be sensed from Bella; perhaps her fortitudinous came from her three and a half years’ experience in martial arts. Both sides were relentless in their attacks at first, exchanging fast, vicious jabs, but they had seemed to tire by the end of the first round. A quick break later, their energy was seemingly restored, and Bella nimbly led her opponent around the ring, cornering her into the ropes with consecutive parries. Her opponent, left with no choice but to lift her arms and block, struggled to break free from the onslaught and tried to keep her distance. But Bella was on the offensive, feigning to draw the opponent near, expertly punching and pulling back- you’d have been forgiven if you didn’t believe she had only started boxing in Hilary. By the third round, her opponent is ostensibly flustered and desperate to get in her hits, and she did, but Bella never backed down. By unanimous decision, Bella won.

After the show, Bella told The Oxford Student “I thought the show was so exciting and, judging by the audience reaction throughout the fights, proved that women’s boxing is skilful, athletic and totally badass as well.

“I was also so proud of my team and the organisers. OUABC is full of really tough, intelligent and hard-working people, which makes for a great training environment. My feelings after the match itself were that I just felt so giddy! I think because I’d had this total survival/focus mode kick in for the three rounds where everything external was cut out that once it was all over, I got this sudden rush of sensation. Can’t stop replaying it all in my head and can’t wait to do it all again. I was proud of my performance but really eager to get to work again and improve for the next one.”