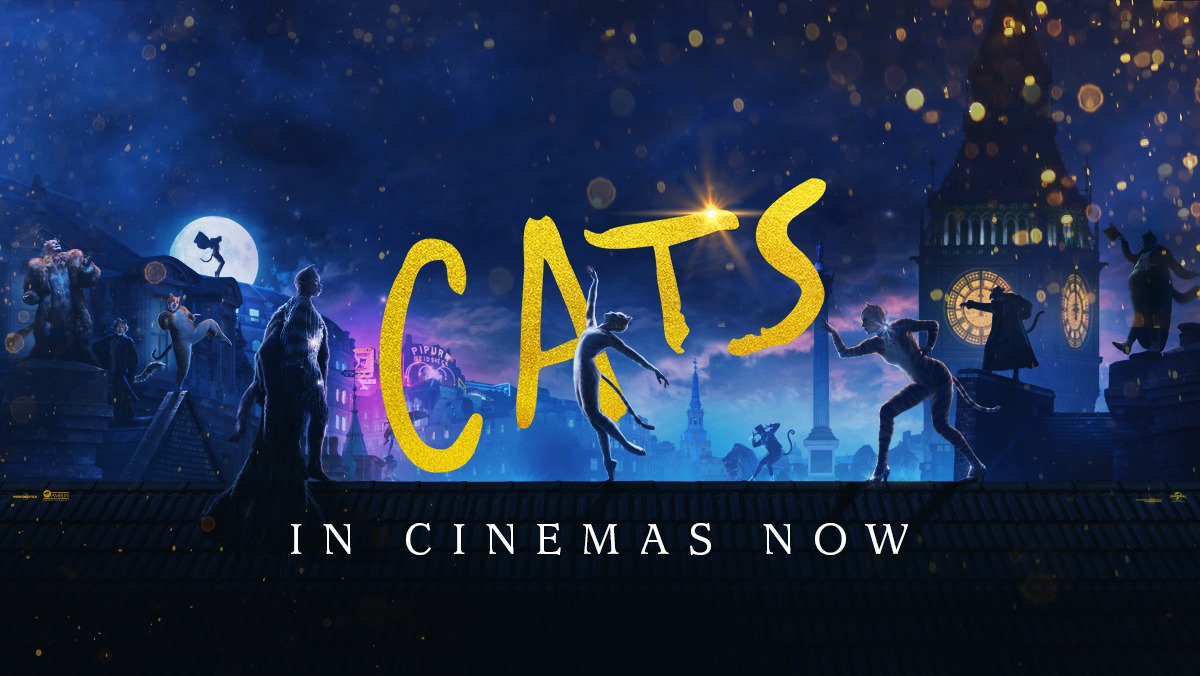 Tom Hooper’s cinematic production of Cats has been a complete failure in the eyes of critics, being so scathingly criticised that there has been talk of a remake, an attempt at redeeming at least an ounce of dignity for T.S. Eliot’s book of poems. While I recognise and agree with many points of criticism, I cannot deny that the film captivated me from start to end, enough that I could almost ignore (I emphasise “almost”) the frustrated sighs and clock-watching of the person seated beside me. Afterwards, I felt almost guilty admitting I enjoyed a film which has been scorned by just about everyone I know who has watched it.

Yes, it had many flaws and the plot often felt like an afterthought, but the film certainly had many positives that have been smothered under the mound of negative reviews.

The story follows Victoria, an abandoned young cat in London as she encounters the ‘Jellicle cats’ and finds companionship amongst them. It’s explained throughout the many musical numbers that several cats are competing for the annual opportunity of a new Jellicle life; a competition that is judged by the splendour and story behind their performance for Old Deuteronomy. A few half-hearted obstacles are thrown into the plot, primarily by the mysterious and brooding Macavity, played by Idris Elba. The storyline is certainly verging on slow and seems hastily patched up in places; the introduction and concluding scenes feel like they were planned, but the in-between haphazardly tossed together. Perhaps the saving grace of the plot was Jennifer Hudson, her stunning performance of ‘Memory’ weaving a note of continuity throughout the film.

Although the plot felt weak and careless, it must be remembered that, first and foremost, Cats is a presentation of poetry – an attempt to translate Eliot’s vibrant characters into a multi-sensory experience. The personalities of cats such as Mungojerrien, Rumpleteazer, Gus, and Mr. Mistoffelees shone through on the screen, creating characters with the same mischievous charm that is first presented in Old Possum’s Book of Practical Cats. The words of Eliot’s poems were brought to life and, for a cat lover and a 10-year fan of the original poetry, I became quickly attached to the quirky and dynamic feline characters.

The film reminded me of a theatre production that made many compromises, but also cost £10 instead of £100 for a good seat. The formations of the cast at many points would have translated well on stage, particularly the theatrical use of levels in The Ad-Dressing of the Cats. The close attention to details – such as Francesca Hayward’s beautiful ballet positions and posture that characterised Victoria the White Cat -reminded me of meticulously rehearsed theatre rather than the often-clumsier cinematic counterparts. Yes, the cinematic aspects were often poor quality, particularly the CGI, but the oddly exposed human fingers and faces on cat bodies once again strangely reminded me of theatre costume, an aspect that I certainly found interesting. Cats is a film driven by its attempt to bring theatre to the big screen, this preoccupation perhaps explaining its lacklustre storyline and clumsy mistakes that have led to its terrible reception.

If you’re looking for a cinematic masterpiece with an enthralling plot and seamless effects, then Cats may not be your number one choice of film this season. However, I recommend that you don’t get deterred from watching it by the swarm of negative reviews; you just might find that you’re still subconsciously humming the songs a week later.

WE MANDELA-D TO THE SUNRISE