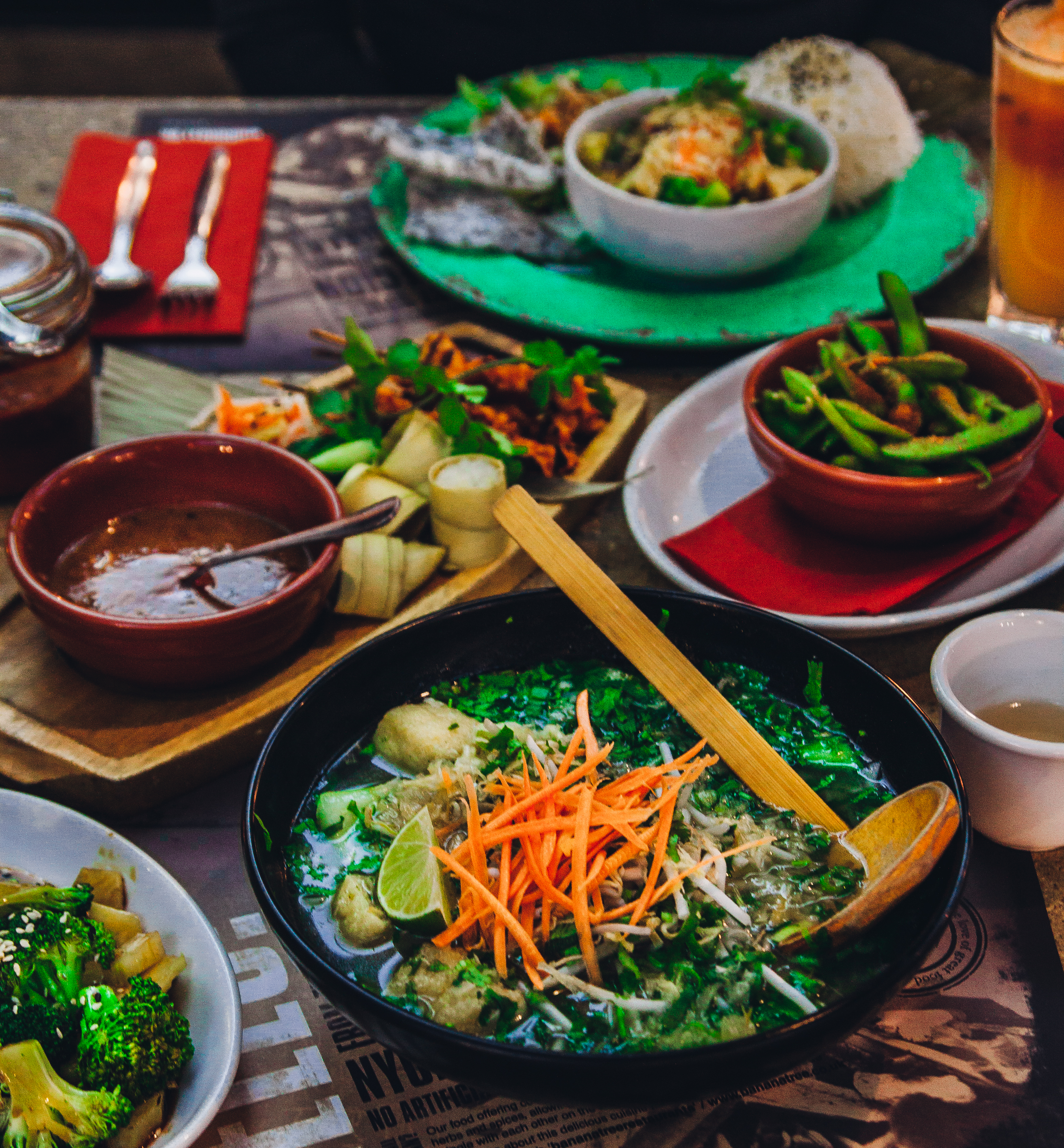 The annual month-long celebration of veganism is upon us – Veganuary. As someone who made the decision to eschew animal products seven years ago, I rejoice every time January rolls around. Supermarkets bring out sandwiches which aren’t stuffed with the uninspiring falafel-hummus combination, restaurants reinvent their vegan offerings (gone are the days of ‘house-salad-but-will-you-hold-the-cheese’). The bourgeoning population of vegans has demanded better food options, and boy, did they deliver this year. First stop – Banana Tree.

When Banana Tree reached out to me to review their vegan menu, I was absolutely thrilled. I have been to their Oxford branch several times, lured in by the promise of authentic Indochinese food. Almost half of the menu is, or can be made, vegan, so needless to say I was already thoroughly infatuated. We popped in for lunch on a Friday and were pleasantly greeted, and my request for a seat with better lighting for photography was politely accommodated (I know, I am that person).

It was difficult to narrow down what we wanted to eat from their vegan options. Seven years as a vegan has left me entirely incapable of making a choice when there are more than three things on the menu that I can eat. But we eventually did come to a decision, and agreed to share the mains and sides between us, tapas-style, so we could each get a proper serving of everything. And while I regret not getting one of everything on the menu, I will take it as an excuse to go back. Stat.

First, Banana Tree’s exclusive Veganuary special – the Pak Choi Noodle Soup. I am a noodle soup aficionado. I adore them all – pho, ramen, wonton noodles, laksa (Banana Tree has a version of this, and I promise you, it is glorious), even minestrone when it is studded with curls of macaroni. Banana Tree’s new noodle offering packs a punch. The broth is intensely flavourful, and is almost as magnificent on the nose as it is in the mouth, throwing notes of citrus into the air. Resting just below the surface of the golden broth are nests of rice noodles (which are, in my opinion, the best noodles to deploy in an Asian-style broth because of how liquid clings to it). Tofu puffs, spongey and saturated with the soup, bob happily in the broth. I must admit that I am not the biggest fan of pak choi, but when it was left to languish in the soup, it wilted ever so slightly and took on a lot of flavour – LIFE. CHANGING.

I vehemently believe that there is no dish on earth which cannot be enhanced with a crowning of crispy shallots, and Banana Tree’s noodle soup is no different. If I were on BBC’s desert island discs (dreaming big), crispy shallots would be my luxury. No question about it. I will be going back for another round of this, and I urge you to do the same. Be quick though, it is making only an ephemeral appearance on the menu this January.

I mopped the plate up with utter fervour, which considering how stuffed I already was, is a testament to its deliciousness

The other main we picked was their Thai green curry, invigorated with lemongrass and tendrils of bamboo. It came served with a perfect dome of jasmine rice. I mopped the plate up with utter fervour, which considering how stuffed I already was, is a testament to its deliciousness. A little serving of house salad, with a crisp clarity of flavour, provided that well-needed brightness to counteract the silky curry. Can someone please get me the recipe for that dressing? It was phenomenal. The final embellishment to the dish was a side of Asian crackers. And while they looked magnificent, glossy and speckled with black sesame seeds, they proved disappointing otherwise. I found them far too hard and rather bland. I assume this was their way of substituting the traditional prawn crackers, the ones which cling to your tongue and taste like the underbelly of the ocean, but these vegan versions fell short.

I am a stickler for authenticity. As someone who grew up in Singapore, satay holds a particularly special place in my heart. Far too often, I have had vegan incarnations of this dish which bear only a passing resemblance to their Asian antecedent. Satay sauce isn’t made up of peanut butter and chilli paste! But Banana Tree’s satay sticks, and sauce, were perfect. So perfect that my dining partner, a self-confessed carnivore, asked the waiter to confirm they were vegan. If you aren’t a big fan of meat substitutes, perhaps this wouldn’t be your jam. But if you are a newbie vegan or even vegan-curious, this would be the ideal dish to cushion those meat-withdrawal symptoms.

The satay is served with ketupat, little bundles of compressed rice, as is traditional. For the uninitiated, ketupat are diamond-shaped cakes of rice, cocooned in interlocking coconut leaves. Banana trees’s version is a little simpler, avoiding the pomp and fuss of weaving the leaves., leaving them as little cylinders. I did notice, however, that they opted for glutinous rice rather than a regular medium-grain.  I must admit that I rather preferred it. It was bouncy, chewy, and dangerously easy to eat too many of, especially when drowned in the satay sauce.

There is truly no better way I can envision eating broccoli.

Amidst all this delicious chaos, we needed something lighter. It was decided that we needed something more vegetal. After much umming and ahhing, we picked the edamame with garlic spiced salt, and their stir-fried broccoli. The edamame was, well, edamame. I felt like the garlic salt didn’t quite add much – and would have rather liked it to be a touch more punchy and salty. But perhaps my palette was spoilt and petulant after that transcendent noodle broth. The broccoli, however, was skyscrapingly tasty. And – my favourite bit – included the broccoli stems. Broccoli stems are a highly-underappreciated bit of vegetable in the culinary world. Why do people throw them away? Here, they were sliced into little discs and fried with the rest of the florets in a briny sauce. There is truly no better way I can envision eating broccoli.

Banana tree has a whole list of other vegan menu items for Veganuary participants, or indeed anyone who likes good Asian food. After all, don’t we all? I have tried some of their dishes on previous occasions and have never been disappointed (the monk fried noodles cures all ills). So, hop on down to George Street to fill your bellies – just remember to be good and hungry.

Disclaimer: I was offered a free meal at Banana Tree in exchange for my candour, all opinions expressed here are my own.