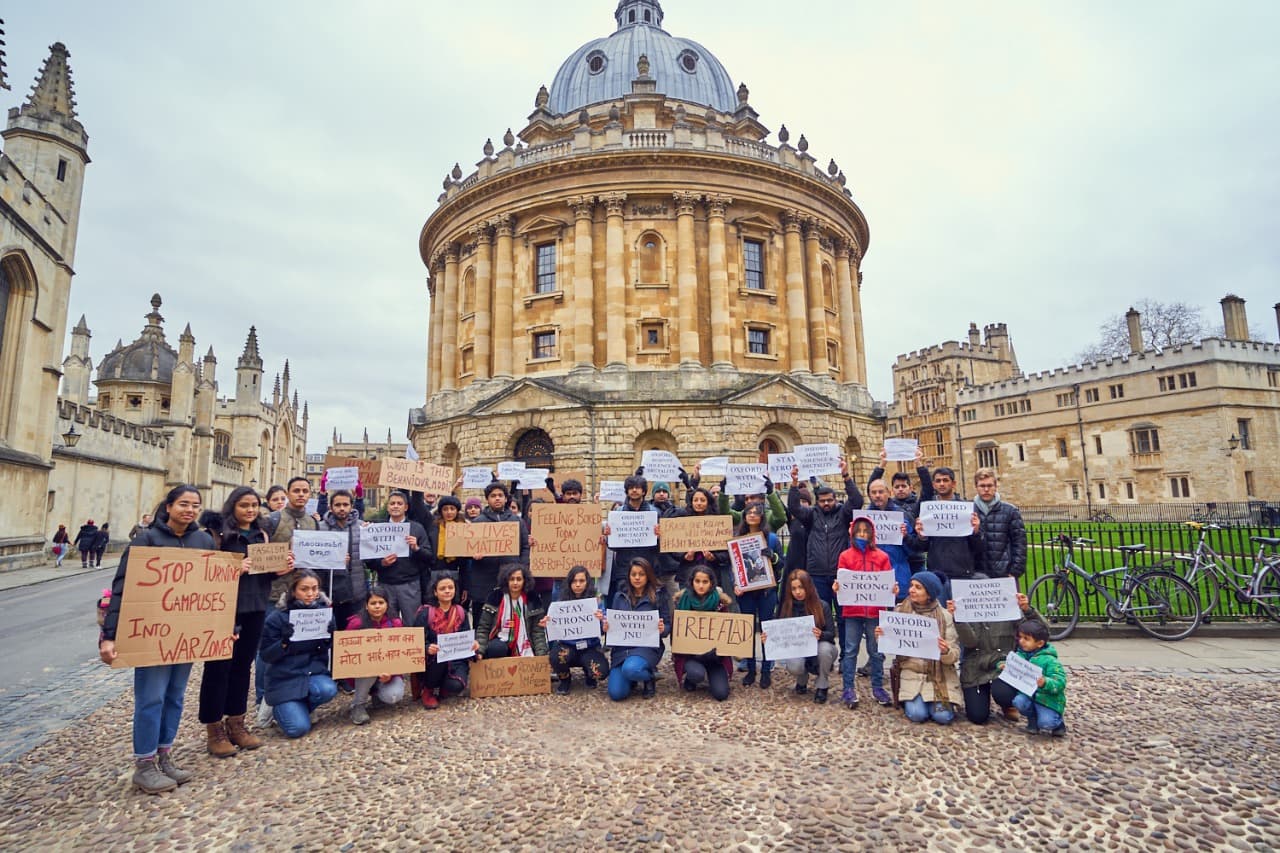 A group of Oxford students joined an international show of solidarity against the violence that broke out on Jawaharlal Nehru University’s (JNU) campus on the 5th of January, where a group of masked men attacked students and university staff, injuring thirty-four people in total. The attack follows a protest by more than one hundred JNU students and members of staff against fee hikes.

The Oxford protestors gathered outside the Radcliffe Camera twice following the attack, meeting once at 9pm until midnight on the 5th of January and once more the following day. Some carried signs reading ‘Stop turning campuses into war zones’ and ‘Oxford with JNU’. Many of the protestors were carrying candles.

In a statement against the attacks, students, academics and affiliates of Oxford wrote, “We demand that the government take strong action against the goons who attacked students in JNU today and independently investigate the police’s role in this incident and others in the past weeks.”

Gaurav Dubey, a protestor, said, “it was important to protest here to reflect the deep discomfort that the international Indian community feels with the developments unfolding back home … we have a responsibility to stand up for our student fraternity who are facing situations we were fortunate not to.”

“Could you imagine police or assailants storming into the Bodleian or student halls, attacking students simply because they protested divisive politics or a fee hike on the regular?” Aruna Chandrasekhar, another protestor asked.

The attack follows a string of anti-government protests which have seen seventeen people die since December whilst protesting against the Citizenship Amendment Act, which is considered by many to be discriminatory against Muslim asylum seekers. This brings the numbers of protest-based fatalities in India to twenty-seven in recent months.

Many fear that the increasing violence reflects India’s growing Hindu nationalist movement, spearheaded by Prime Minister Modi and his Bharatiya Janata Party. The JNU assailants are widely believed to be attached to the Akhil Bharatiya Vidyarthi Parishad (ABVP), a right-wing Hindu nationalist organisation with ties to the Prime Minister – although the group strongly denies this and has accused left-wing groups perpetrating the violence. Police, who have been accused by JNU students of not intervening to prevent the violence, have charged twenty of the JNU protestors with vandalism, yet none of the masked-attackers have been arrested so far.