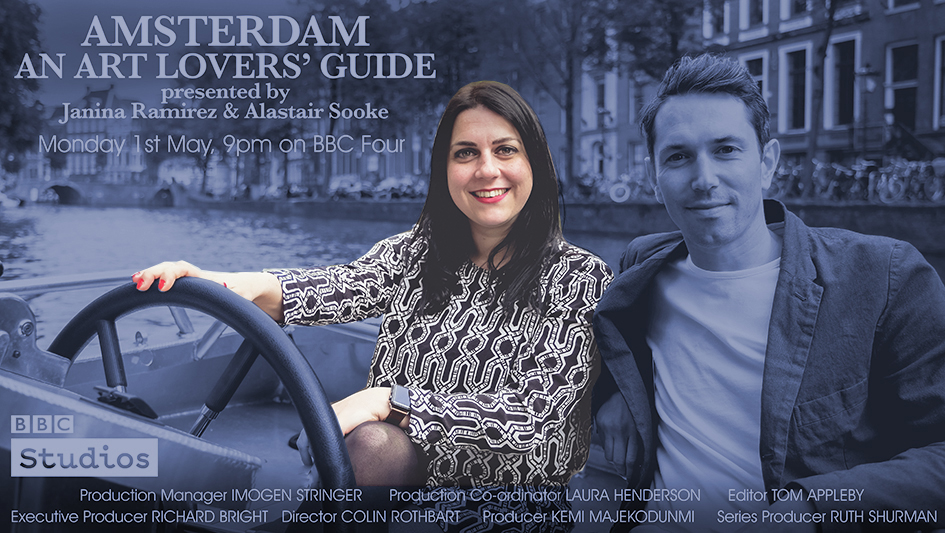 Dr. Janina Ramirez is a popular art and cultural historian, and a member of staff at the University; studying English at St. Anne’s, Janina went on to study for an MA and PhD. She has presented a number of successful documentaries for the BBC and written numerous books, including a three-part ‘Viking Mystery’ series for children, evoking the early history she is so fascinated by. Combining Medieval history and culture with her fantastically unique style, Janina is invigorating history with a sense of freshness for a new, younger audience.

Janina and I discuss the significance between past and present, historical ‘fake news’, women in broadcasting and academics, and her upcoming projects.

Politically, these are rather incohesive times… does delving into the comparatively rudimentary lives and strange practices of the medieval world make modern society seem a little less bleak?

I’d argue they were hardly rudimentary and not really that strange. If there’s one thing I take away from studying the past it’s that humans have always been as complex and fascinating as we are now. We simply stand on the shoulders of giants. I have also taken heart from the vacillations I see across time. For every technological or ideological step forward, there is a pendulum swing backwards, but humanity is constantly striving for change. The people of the medieval period fascinate me in that many of them could develop insights that were quite astonishing given that they lived before many of the major scientific discoveries. I am always drawn to the beautiful and enduring through time and so looking backwards always gives me hope for the present and future.

In a recent tweet, you fleetingly mentioned a ‘pendulum of time’: do you see any similarities between the brutal culture of Anglo-Saxon Britain and the ruthless politics of today?

Again I’d emphasise that our understanding of the Early Medieval period is not necessarily true and has been conditioned by generations of historians who have presented it as ‘nasty, brutish and short’. This is something I’ve worked hard to unravel. Our political views in parts of the West are narrow and exclusive. We rarely compare what we see as ‘ruthless’ with leadership and brutality taking place in our own lifetimes in other parts of the world, let alone in relation to the past. The social organisation of the Early Medieval period meant that many sectors of society would simply be oblivious to many of the political machinations taking place around them. We live in a time of hyper-communication and this means every event is open to scrutiny. It is arguably no more or less ruthless. We are just more aware.

Our political views in parts of the West are narrow and exclusive. We rarely compare what we see as ‘ruthless’ with leadership and brutality taking place in our own lifetimes in other parts of the world, let alone in relation to the past.

If you could impose one rule from Medieval society on modern-day Britain, what would it be?

As with everything from the past it is in a state of flux and change. Rules or laws are no different. So I’d have to pinpoint one rule from one time and one moment. It would be the reign of Alfred the Great. He was battling an unenviable force of Vikings that were close to conquering all of Britain. In the face of such military strife he didn’t channel all his (much depleted) funds into warfare. Instead he determined to set an equal amount aside for civic redevelopment and education. His efforts ensured the continuation of learning, art, literature, historical documentation and laid the foundations for many of the towns and cities we live in today. That’s historical foresight for you!

Trump’s relentless rhetoric has caused ‘fake news’ to become a topic with which everybody is now familiar. Would you say that there is are elements shared with ‘fake news’ in the study of history, where events are contested and contemporary historians battle with differing interpretations?

This is the subject of my new book actually. I am consistently horrified by how our understanding of the past is founded on lies and manipulation. It is to be expected of course, as every generation rewrites the past in a way that suits their present. But much of the blame lies at the feet of the nineteenth-century scholars. Their filtering of historical events has meant many medieval lives were simply ignored and lost, or were rewritten so as to fit a new imperial and colonial superpower. I’m trying to return to original sources and find a version of the past that is perhaps more ‘true’, but it is every scholar’s fate that we sieve what we study through ourselves and the times in which we live. It is leading to some excellent historical detective work though.

I am consistently horrified by how our understanding of the past is founded on lies and manipulation.

Throughout your career, you’ve handled some fascinating and wonderfully precious objects; what’s the most memorable or profound artefact which you’ve studied?

There have been many. Handling the mummified head of Simon Sudbury, the archbishop and chancellor executed during the Peasant’s Revolt, was deeply moving. However, I’d say the artefact that I’ve connected with most strongly over the past decades is less bound up with war and suffering, and more a symbol of the great achievements of the past. It’s the Codex Amiatinus, a manuscript which came back to the UK for the first time in over a millennium at the recent Anglo-Saxon Kingdoms exhibition at the British Library. It is the oldest surviving individually bound complete copy of the Vulgate Bible and until the last century was thought to have been made in Italy. However, some clever detective work uncovered the original inscription which said it had, in fact, been produced by first-generation Christians on the edge of the known world – in Newcastle! Technologically it was equivalent to developing the first super computer in the eighth-century and it is so heavy it takes two men to carry it.

Your work on television (as well as you children’s books) has helped in making history a subject which is engaging with a much wider audience; why do you think it’s so important that we understand the past?

How can we know who we are without looking backwards? Each of us as individuals have an urge to understand where we have come from, what has happened to us, and how we have been affected by events taking place around us. That is studying history in miniature. What’s more, every subject – maths, medicine, engineering, physics – they all have a history and we get to where we are through the efforts of those who came before us. To be blind to the importance of the past is to wander blind into the future. History should not be considered an auxiliary subject or something we study ‘for love’. It should be the fundamental basis of how we make sense of how we live today.

It’s fair to say that you’ve been very well received by the general public: before you television career, however, how do you think that academic society responded to your being a somewhat ‘unusual’ historian – that is, not an old, white man with a stuffy fashion sense!

I’ve been very lucky with the way I’ve been received by the public. I’d say social media platforms like Twitter help no end, as I’m able to connect directly with people who support my work, and this has actually led to new friendships. I started working in television completely by accident when a BBC researcher typed ‘Anglo-Saxon art’ into Google and my PhD thesis popped up. Being on television has never been the end goal of my work, but it is part of what I love doing – communicating my passion for the past. I made a pact with myself when I first started reaching out through public engagement that I would present the true me. I am unconventional, I like listening to esoteric music, I enjoy socialising and I’m full of love and enthusiasm. That’s the real me and I don’t hide it in favour of what might be deemed more ‘acceptable’. Who knows if that’s a good idea or not, but it’s the only way I could share my ideas with complete sincerity.

I am unconventional, I like listening to esoteric music, I enjoy socialising and I’m full of love and enthusiasm. That’s the real me and I don’t hide it in favour of what might be deemed more ‘acceptable’.

You’ve worked with a number of female historians – Lucy Worsley and Alice Roberts, for example – would you say that the ‘academic landscape’ has changed since when you first started your career?

It most certainly has. I particularly welcome the new set of voices that are appearing on our screens, spear-headed by David Olusoga, but joined now by Emma Dabiri and Sona Datta. Alice and Lucy are dear friends, as is the pioneer of women on television, Bettany Hughes. We all support each other and recognise in each other a shared spirit of endeavour. When I first began making history documentaries even the style of delivery was different. A man in a suit would walk slowly towards the camera while sharing ‘facts’ and ‘truths’ about a period. Now we are more open to alternative viewpoints, to individual passion being expressed and to hearing a range of opinions. The viewing public has changed their tastes and we have to listen to what they want now. The reason programmes like ‘Who Do You Think You Are’ and ‘A House Through Time’ work so well is they put us – the general public – into history. I hope this trend continues.

Are you working on any new fiction or television projects?

I’m busier than ever which is exciting and terrifying! I’m completing the final book in my children’s fiction series, writing non-fiction for children and am embarking on my biggest work to date exploring lost women from the medieval period. I have a number of exciting film projects coming across 2020 and continue to share my love of Art History through my Art Detective podcast. It relaunches soon and our first guest is Sir David Attenborough talking about J.M.W. Turner! I also work full-time at Oxford University and have two children that are my main job! So I’m not getting much sleep at the moment. But I’m so lucky to be able to make a living from sharing what I love. I can cat nap in between!