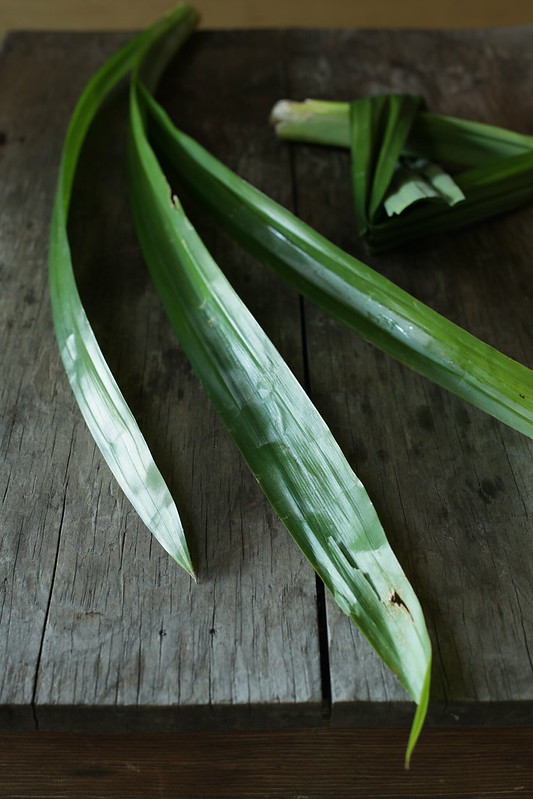 An Ode to Pandan

If you happen to be a stranger to pandan, let me introduce you to this enigmatic Asian ingredient. Hold tight, you’re in for a treat.

Pandan, or more correctly Pandanus amaryllifolius (no sniggering, please), is a tropical plant with an aroma like no other. It has a subtle, almost floral perfume, dancing with notes of vanilla and the tiniest twinge of a grassy flavour.

I often tell people that pandan is to Southeast Asians what vanilla is to the West. And while this is certainly true – pandan is omnipresent in Singaporean desserts— it also goes where vanilla dare not.

These leaves, a verdant shade of green, are no stranger to savoury recipes. From being knotted and submerged in a bubbling Thai curry, to being woven together and used to steam sticky rice parcels. Pandan is the superstar of Asian cooking. Nigella Lawson herself has declared pandan the new ‘it’ food of the culinary world. And who are we to question the woman who skyrocketed avo toast into fame? (Not I)

Mention the word ‘pandan’ to any southeast Asian, and each will tell you their own favourite way to use the leaf to imbue food with its glorious aroma. Some will recount stories of eating kaya, a coconut jam, slathered between thick slices of toast with a generous wedge of salted butter. Others will speak dreamily about nasi lemak (‘fatty rice’), the breakfast staple in Malaysia, where rice is left to bubble in coconut milk steeped with a tangled bundle of pandan leaves.

For me, two things stand out. The first, a pandan chiffon cake, was a staple in my house every tea time. This emerald-green cake, like it’s American counterpart, is light, airy and almost impossibly cloud-like. Yet, the coconut milk that is folded into its batter lends a distinct creaminess which sets it apart. My sister would often squidge down her own (terribly generous) slice of cake to half its volume, in the hopes that my parents wouldn’t notice just how big it really was. She often got away with this, and my attempts at mirroring her success were often (to my dismay) in vain.

The second is as close as it gets to pure bliss. Walk into any neighbourhood bakery in Singapore and you will be hit with an almost-overwhelming smell of pandan and hot, caramelising batter. Your nose will almost always guide you to a lady lazily fanning a steaming waffle iron. Pandan waffles are, in my opinion, in a league of their own when it comes to Great Snack Foods. The batter itself is denser than an American waffle, and it is never as crisp as a Belgian waffle. But it is a shocking shade of green and this only serves to adds to its charm. Très Shrek.  It is best eaten folded in half and stuffed with ooey gooey peanut butter. Eat it warm and the crevices in the waffle form little pockets of molten, oozing peanut goo. Saccharine Glee.

As I said, in a league of its own.

Now all of this would simply be cruel temptation if I didn’t tell you how to get your hands on some pandan. Unfortunately, the fresh leaves are next to impossible to find outside Asia, as they are delicate and don’t hold up well to transport. But fear not, there is still hope. If you live near a Thai, Singaporean or Asian market (I am looking at you, Cowley) – lucky you. Peek into the freezer section and try to look for frozen pandan leaves, which are still a vibrant green and come encased in plastic. Failing that, you can also look for pandan extract or essence (which is also sold online). While purist will tell you that the bottled flavour is never quite the same, it is still going to make you some brilliant waffles.

Now on to the recipe, for I have taunted you enough. If you lack a waffle iron, like 99.9% of all students, make it on a grill pan for little parallel streets where peanut butter can pool. Or, if you’re reckless, some chocolate spread. Otherwise, your trusty frying pan is still going to make some resplendent pancakes out of this batter. This, is a thing of beauty.