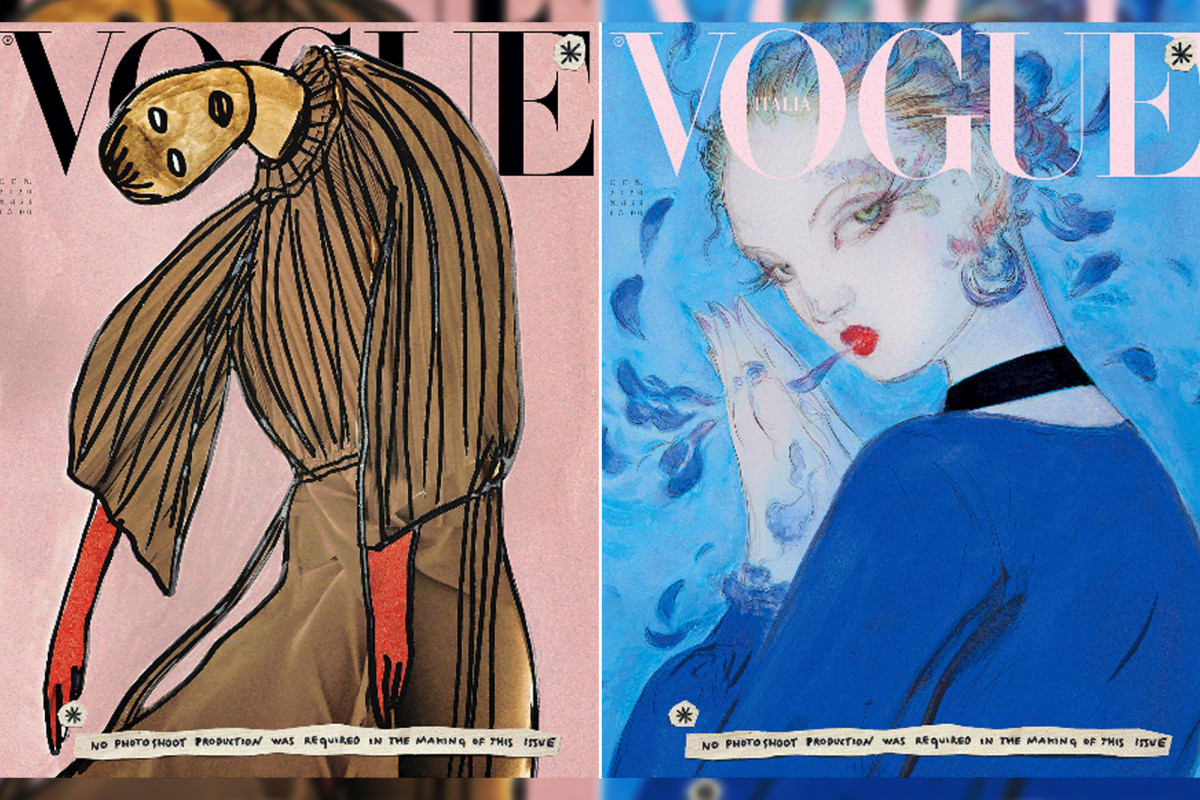 Image description: Two of the artworks presented in the January issue of Vogue Italia

Vogue Italia has shaken the fashion world to its unsustainable core with the release of its new 2020 issue. This special issue, that came to newsstands on January 7th, features “zero editorial shoots” as a reaction against the ever-growing carbon footprint of the industry.

In taking the step to place current contemporary artists’ work on the cover, the magazine has managed to not only reduce the number of garments that would be hand-produced and ‘once worn’ for the issue but also highlight and display artist’s work – giving the stage to the underdog of fashion: The artist.

The fashion world itself needs a serious and undeniable change in order to resign their place as one of the leading perpetrators of climate change.

Two things are at play here. Raw artwork has been consistently disrespected within the fashion industry; highlighted by the many court cases artists make in order to gain copyright to work that is ripped off in not only couture but also high-street stores (see Zara 2016). Moreover, the fashion world itself needs a serious and undeniable change in order to resign their place as one of the leading perpetrators of climate change.

In a single outfit, Ecotricity estimated that we are looking at a total of 76kgCO2 eq, almost the equivalent of driving from London to Paris. By reducing the number of shoots per issue, there would be both a dramatic decrease of carbon from the lack of clothing and further, the carbon fiends by the name of lighting, travel, catering and technology (all required in order to make a single shoot) are all mercilessly recalled from the action. These small changes from every publication could have a major impact on the environment – that’s not even mentioning the ripple effect of the retreat of catwalk models from the cover.

When a cover, central to public thought, displays the bewitching image of inspiring and captivating artwork, rather than the face-tuned vision of a celebrity or model that “has it all”, the everyman or woman walking past may not face the crippling anxiety and feelings of dissatisfaction currently caused by impossible standards of beauty. This reduces the likelihood that said viewer may go out and… shop. As Lucy Siegle once claimed, “fast fashion isn’t free. Someone somewhere is paying”.

When there is a current estimate of 15 million tons of used textile waste generated in the US each year, this decrease in incentive to buy more, rather than re-use and re-style should be worshipped. For as Australia burns under the effects of rising temperatures, it should be clear to us who is suffering from our luxury.

In a world under pressure, this gesture not only shows that it is possible to change and that the fashion industry realises its position as a villain against the climate, but this issue has achieved the desirable effects across the art world itself. In highlighting artwork on their covers, Vogue Italia has hailed the seven artists; David Salle, Vanessa Beecroft, Cassi Namoda, Milo Manara, Delphine Desane, Paolo Ventura, and Yoshitaka Amano as centre stage to public gaze. The move does not draw the eye away from the fashion itself, with Gucci fore-fronting every image, but allows the viewer to experience escapism without the guilt and self-loathing attached to it. Indeed, the covers display stylistic and material distinctiveness, as well as human diversity.

To take a look at just one, Cassi Namoda’s painting of ‘Ambar Cristal Zarzuela in Gucci’ has the depth, intrigue and sophisticated minimalism that would rival even Amber Valetta’s elegant appearance as the face of Italian Vogue. The painting is playful and simplistic, with striking use of texture and stroke. As such, the covers highlight how art can play with the subtlety of emotion and expression that a photographic image may shy away from. For the model is once removed, hence deeming the abstraction ‘lawful’. Each cover, in its own way, is able to play with the feminine figure it deploys, and heralds’ elements such as motion, excess and exaggeration as key to Vogue’s ethos.

Vogue Italia should be congratulated in their forward-thinking approach to redesigning the editorial vision of fashion in their January issue, for they have captivated not only the minds of young creatives but also managed to show the world that change is possible. This step, however great, should be only the beginning of a complete overhaul of the marketing, production and creative teams at the centre of the industry, as we respond to a bleeding world.

A dress for every occasion