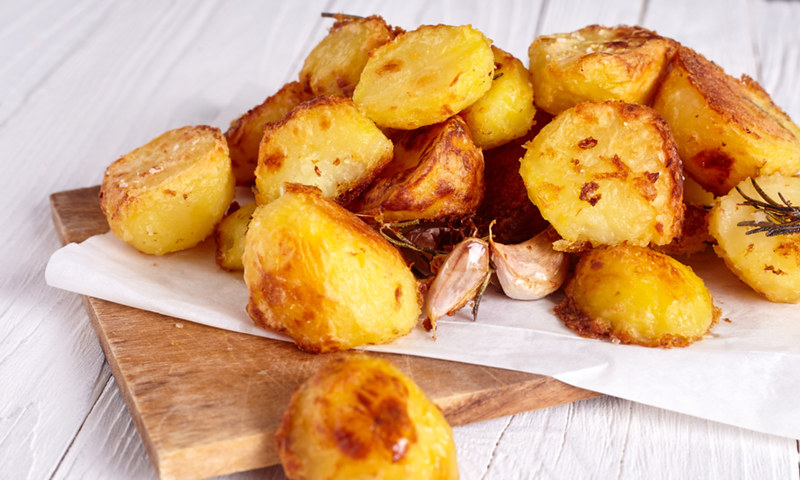 The humble potato – I have often been enraptured by how it is magically transformed, be it by heat or by method, into a multitude of different dishes. Fried, mashed, scalloped, baked… is there truly one best way to serve a potato? So, I set out to make a list of them all, which – as a disclaimer – is highly biased to this individual. While the potato is too various in its incarnations for this to be an exhaustive list, I have tried to, where possible, group together those from the same family. Is a rosti truly a type of hash brown? Potato purist – do not come for me. I am just a girl trying to pit her favourite potato dishes against each other to decide what to do with the glut of potatoes languishing on my kitchen counter.

Mash
To ease us into our Great Potato Showdown – the mash. A large part of eating, for me, is textural. Sure, taste plays a part too. But in what universe would a combination of potato, butter, salt and cheese not taste of enduring bliss? My issue with a mash, is that often it is just that – potatoes turned silky soft without the slightest bit of crunch. That is, until I discovered a version that the Bon Appetit test kitchen chefs developed: your classic mash, garnished with a fried mélange of breadcrumbs, garlic, and potato crisps. The perfect textural counterpoint to the velvety mash. I implore you to try it, for even when drowned in gravy, the crisp shines through. To avoid your mash turning viscously glue-y, you want a floury potato – a Yukon gold or russet is ideal. Waxier potatoes turn glossy and paste-like. Suboptimal.

Roast
I wasn’t the biggest fan of roast potatoes until I discovered that there was a method to its madness. You can’t simply toss them in a fat, salt liberally and leave the oven to do the rest of the work. And since altering my roast-potatoes-ways, I see what the fuss is all about. You should pre-cook them in water (heavily salted – like the ocean), drain, shake them with all your might in a covered bowl until their surface turns rough and fluffy. This is the key for creating the peaks that turn gloriously caramelised and crunchy under the heat. Toss them in about a tablespoon of flour for an added layer of crunch, then toss in goose fat. Now, I admit – as a vegetarian, I have never had them in goose or duck fat, and olive oil imparts too much of its herbal flavour for it to be a fair comparison. I am simply adding it here as it is traditional, although I can personally vouch for a roast potato augmented with a good glug of olive oil, tufts of thyme and rosemary sprigs.
As a bonus  – tethering the line between a mash and a roast – skip the toss-in-a-bowl faff and simply smash them on a baking tray with the bottom of a glass, forming little discs of smashed potato that will happily drink up whatever you season them with.

Fries
I think I can safely say that there is not a person on earth who truly dislikes fries. Anyone else is simply kidding themselves. There is a certain kind of joy you get from shoving fistfuls of glistening, hot batons of salty potato into your mouth after a night out. But fries themselves come in all shapes and sizes. Thick cut, shoestring, home-style, sweet potato, curly, waffle… there isn’t a single one I have not imagined myself eloping with and living out the remainder of our lives in wedded bliss. Although, if we are naming names… shoestring – what are you about? I need more substance.
While I am an advocate for all forms of fries, I cannot begin to tell you how much better they are with a bit more seasoning. Salt is great, but have you ever tried them with smoked paprika, rosemary, or (for the adventurous) shredded bits of seaweed? Phenomenal. I just wish seasoned fries were more of a thing when eating out, for frying my own in a wok full of glistening oil sounds like a recipe for disaster (and third-degree burns).

Jacket
The ultimate childhood go-to meal. Bake a potato until its skin shrivels and starts to pull away, slice open, slip in a knob of butter and let the residual heat burst forth and melt it. The magic of the jacket potato lies in how infinitely customisable it is, and so in my family was always the perfect way to solve a squabble between the vastly differing palates of its members. Heinz baked beans was a favourite, always, topped with slivers of spring onion for brightness (and, for me, a bit of sophistication). Tuna mayo was a no-go, although given how popular it is as a jacket potato filling I imagine I am one of the few who despises anything abbreviated with ‘mayo’. While my affection for this is 90% nostalgia, and it isn’t that great in the grand scheme of things, I will admit that it is a perfect student meal. It has served me well, especially when I was kitchen-less for the grand part of two years. Simply pierce a potato with the tines of a fork and microwave for 8 minutes on high, flipping it over halfway.

Scalloped Potatoes (in its many variations)
At its very basic (but never to be underestimated), you have Pommes Anna – scalloped and left to luxuriate in butter. When it is augmented with cream, you get a Dauphinoise, and if tossed in cheese and provided with a breadcrumb roof – Au gratin. All these cousins are ultimately made of a base of shingled potatoes. While these all have the makings of a fabulous potato number, I have often been served some that fall short. In a similar strand as my issue with a mash, texture is often the downfall. Potatoes are sliced into thin, even discs and arranged (often quite beautifully) in a baking dish. And while they might win in terms of aesthetic points, you are sometimes left feeling a bit lacking. This is where Au Gratin reigns supreme, for its roof of breadcrumbs shatters so satisfyingly when you tuck into it, and adds a delightful crunch amidst all the velvety potato fluff.

Gnocchi
A weird flex, perhaps, because in the list of best potato dishes gnocchi would rarely occur to you. But I used to help my mother mash potatoes, stir them with egg and flour, and roll them into balls by pressing them up against the tines of a fork. potato and gnocchi, to me, are inextricably linked.
Now, I am not the biggest fan of pasta. And while my admission of this might lead you to want to discredit my opinion of anything food-based, I did grow up in Asia. For me, a bowl of sesame noodles will always trump a spag bol. However, if gnocchi is in the equation (for it is, ultimately, a type of pasta), I would happily jettison the noodles for these little dough dumplings. I love how supple they are, their bounce, their chew. Although (in a true Ina Garten form) I vehemently believe that store-bought can never measure up to homemade. They do not need to look as pretty, or indeed as uniform, as those you can get in a plastic bag in Tesco. But trust me, they are far more favourable in texture.

Hash Browns
It seems like every culture has their own spin on grated-and-subsequently-fried potatoes. Here, we have our adored hash browns. The Swiss have the Rosti – spread out whisper-thin across a skillet. In Jewish cuisine – Latkes, made with the addition of egg and matzo meal to help with binding. Tater tots, little cylinders of fried shredded potatoes, in America. And I have been very disappointed by how next-to-impossible these tots are to find here in the UK.
I love them. As far as texture goes – we are on to a winner here. The exterior crisps up gorgeously, leaving the fluffy strands of potato in the middle. When you bite into them, crunch gives way to clouds. I now make my hash browns in a waffle maker. If you, like me, belong to the group of students who have a ridiculous number of one-use kitchen gadgets – here is how to turn your waffle maker into a two-use-cooking-machine. Grate a few potatoes – the floury type is ideal, place them in a dish towel and wring them up to extract as much moisture as you can manage. Decant the potato strands into a bowl, and add in some salt, pepper, a spoonful or flour, and if you eat eggs – one here can help them with binding. I manage perfectly fine without. Preheat your waffle maker, divide the potato mixture between the divots. Cook them according to your waffle maker’s instructions. I like to treat mine as you would a mash (i.e. drowned in gravy), but you could each eat them as is, or topped with applesauce or sour cream.

But alas! This whole exercise would be pointless if I didn’t choose a favourite, but this is no easy task – there is a reason the potato is so widely adored, for it has the ability to take on many different forms, a plethora of different flavours, and still delight. The choice is often one of personal preference, so while I have (with much anguish) decided to settle in for a dinner of hash browns (made in my waffle maker), Linda Mccartney sausages and an avalanche of gravy, it does not mean that the hash brown is superior. Go forth and decide what to do with the next potato you happen upon in your produce drawer.

The Spanish tortilla, potato crisps (!!), regal duchess potatoes, fondant potatoes that seem to sublimate in your mouth, satisfyingly-striped Hassel back potatoes… it seems like a wonderful, starch-saturated abyss to be in. But in an effort to keep to a word count (and for the sake of my sanity), many other potato incarnations have been left unexplored. And for that, I apologise. There is a whole world of potatoes out there, and I, for one, have never been more ready for it.