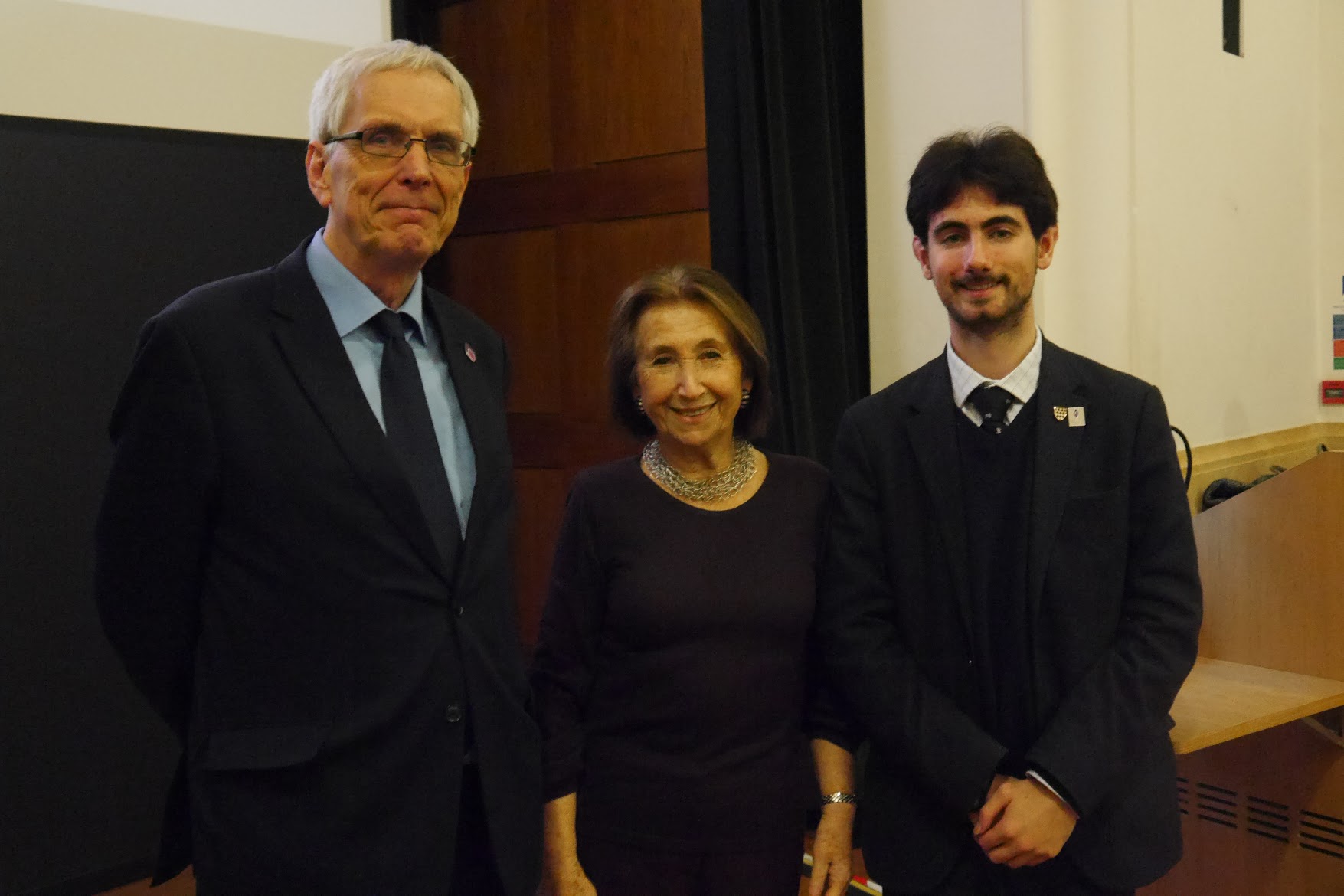 This year’s HMD is significant as it marks the 75th anniversary of the liberation of Auschwitz-Birkenau, one of the Holocaust’s most prolific extermination camps.  The event was organised by Barnabas Balint (MSt History at Magdalen), a member of the Holocaust Memorial Day Trust’s Youth Representative Panel, in conjunction with the Holocaust Educational Trust, a UK-based charity which educates youth on the Holocaust and its relevance today.

The program began with Hannah’s testimony and concluded with a lecture by Professor Nicholas Stargardt, a Professor of Modern European History and Tutorial Fellow at Magdalen College, who spoke about the difficulty children had in forging identities throughout the Holocaust.

After her introduction by Magdalen College’s President, Sir David Clary, Hannah recounted a harrowing tale of fear, loss, survival, and hope to an audience which included Oxford students, local school students, teachers, and members of the public.  Born in a rural Polish town in 1937, Hannah was only a young girl when her family displaced to a forced labour camp in Adampol, Poland.  She primarily discussed her relationships with members of her close family, and the impact the Holocaust had upon them.

When asked by a student why she chose not to comment upon the elements of good and evil so many others do when speaking of the Nazi regime, she responded that after she moved to England at only 12-years-old, no one asked about what happened to her, making her feel invalidated for some time.  Thus, as she relates her story now as an adult, she focuses less on the dichotomy of good versus evil, and more upon her lived experience of it.

In particular, Hannah emphasized the impact her mother, Chaja, had upon her survival.  She recalled that on the day the Nazis found them, her mother walked out of the farmhouse to the awaiting soldiers, deliberately leaving Hannah inside so they would not look for her.  Sadly, Hannah still witnessed the Nazi firing squad that murdered her mother.  “I saw her fall.  And I saw the blood on the snow.  And in that moment, I grew up,” she reflected.

On why Hannah’s story was so crucial to this year’s HMD, Barnabas explained that, “hearing the personal testimony of a Holocaust survivor will help to humanise the history of the Holocaust, giving attendees a personal and individual connection to this part of history.”  When asked if she feared a resurgence of antisemitism today, Hannah responded that she does and that she believes this “kind of hatred always ends in a tragedy.  It’s inevitable.”

Her remarks were particularly relevant as HMD 2020’s theme is ‘Stand Together,’ which highlights how genocidal leaders intentionally alienate certain groups of people in order to more easily target them, but that this method can be mitigated by people who are willing to speak out and challenge this marginalization of others.  The main message of the event was that violent discrimination is not relegated to history.  But, to understand how to confront it today, we must understand first how it happened in the past.