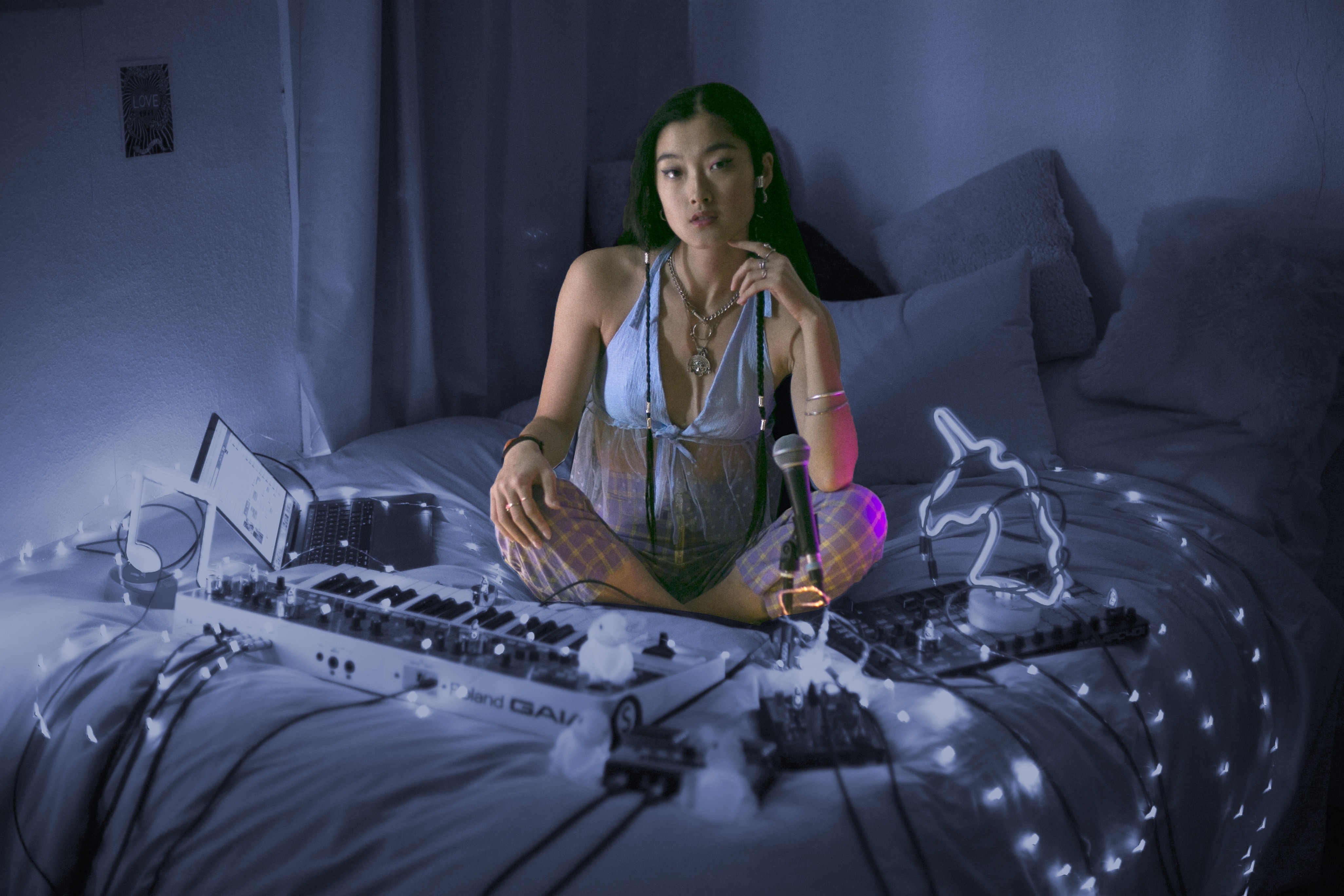 Could you tell us a bit about your background and how you first fell in love with music?

I was born and raised in Edinburgh, but my family are Chinese. My parents are first-generation immigrants, and I have a pretty traditional Chinese family whom I’m very close to. I also have an older brother, who was definitely the first person that influenced my taste in music – think like weird, alternative electronic and indie. I learnt a bit of piano when I was a kid, but I was never any good and way too impatient to learn any songs so found myself just writing and singing random stuff at the piano when I was pretty young. I don’t think I ever ‘fell in love’ with music in that way, it just felt good to listen to and play.

How did you come up with the name LVRA and what does it mean to you? Does it appeal to you as a kind of alter-ego? Why did you decide not to use your real name?

Haha. LVRA is actually the first two letters of my surname and first name (think CHVRCHES?) – I think I made it up when I was about 16. Personally, I didn’t think my real name had that much of a ring to it. I don’t think LVRA does either but it’s just something I’ve stuck with.

You live in Edinburgh, study in Oxford, and have parents from Shanghai. Do you find yourself drawn to these places equally, or feel a certain loyalty to devote more time to a particular location? how have these places inspired the music you make, both lyrically and sonically?

I do wish I spent more time in China. I think growing older has made me realise just how important that part of my identity is to preserve and celebrate. The temptation to assimilate to people around you comes very naturally, especially when you are young and in school and stuff. Now I feel I’m making up for lost time and trying to understand better my Chinese heritage.

Having said this, every experience and place that I have been to has inevitably shaped both my lyrics and sound and I think it’s important to try and not force a certain part of my identity onto my music – it’s really easy to fall into the trap of trying to categorise yourself in both life and music and this is something I’ll avoid at all costs.

Your work is self-written, recorded and produced. Is maintaining this musical autonomy important to you, and how does it feel being a young woman defining her own sound and style in the music industry? Does this theme play into the lyrics and meaning of your songs?

Self-empowerment and autonomy has driven my music for the last couple years. This upcoming EP had to be all of the above to represent the stage in my life that I was going through whilst writing these tracks. But this doesn’t mean I haven’t been surrounded by amazing, supportive people who have given me the courage to sing and have a voice out there. Some days, it feels great – others, the pressure of letting those people, and myself, down can take its toll. I’ve realised that I have to write about both female strength and vulnerability, because they are inextricably linked.

Are you able to talk us through your songwriting process? What comes first – the lyrics or the instrumental? How has this changed over time?

Both. Ideas for songs can start as purely a concept that I want to be able to explore, or lyrics that I write whilst playing around on the piano. Getting better at sound production and experimentation has definitely made it easier for me to write instrumentals before I even start thinking about lyrics.

Who are some artists that have inspired you aesthetically, lyrically, and sonically? Where can we find those influences in your music?

I’m glad you asked all three separately because they definitely come from totally different places. For sure it was young Billie Eilish that started my weird trend of buying things purely in the colour orange (like 3 years ago?), and she’s definitely one of the first artists that made me realise that less is more when it comes to vocals (her and Jhene Aiko who has the voice of an angel). Lyrically, I spent a lot of time listening to Lana Del Rey, Frank Ocean, Joji, etc etc. I think you can hear some Joji influences on my second single ‘u should be in love with me’. In terms of producers, ‘u don’t have to like me’ was definitely inspired by the kind of choppy-sampling that Mura Masa has on his tracks. Other female artists I am definitely inspired by are Grimes, FKA twigs and Yaeji.

What is studying in Oxford like when you are a musician? What has the response been like?

I’m surrounded by super supportive people here – sometimes I do get frustrated because my degree can be pretty all-consuming, but I feel very lucky to be doing both.

You have described ‘u don’t have to like me’ as ‘a middle finger to them all’. Is this theme of resistance a theme that will crop up on your debut EP to be released in 2020? What other themes can we expect to hear?

I never even thought of the word ‘resistance’ to describe my music, haha. I think you’re going to find that the EP is more subtle than that, because for ‘u don’t have to like me’ to be made it took all the other tracks of this EP to get to that point. For me, the EP documents the progress I made in the last couple years with myself, my identity and the people around me. It kind of revolves around this journey to China I had a couple years back where I’d just come out of a relationship feeling very, very lost. This was my chance for me to experiment as a producer and artist – and I wanted to translate what I was seeing and feeling into sound. The key theme is honesty, especially with yourself.