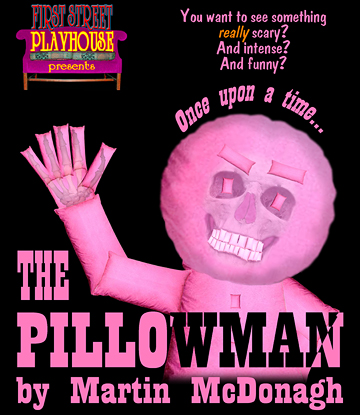 Review: The Pillowman at The Pilch Studio

The Pillowman is the ultimate combination of sadism, subterfuge, heartbreak and humour and Tom Fisher’s adaptation will certainly leave a haunting impression.

On an unlit stage occupied by only a table and three chairs, The Pillowman opens in silence and we are dazzled by the glare of a torch which interrogates the faces of the audience – immediately we are implicated in the harrowing police investigation which is to follow. Cue the entrance of Katurian; a teenage boy who delights in writing barbaric short stories detailing the gruesome murders of young children. Katurian is being detained in custody by detectives played by Jake Rich and Gavin Fleming following a sequence of child murders resembling the narratives of his own stories. Inevitably, Katurian emerges as the prime suspect. The part is impressively played by Marianne James, whose powerful deliverance of several lengthy monologues captivates the audience and convinces us of her character’s struggle. This performance is equally matched by Stepan Mysko von Schultze whose portrayal of Michal, the mentally impaired brother of Katurian, is not only remarkably credible but hilariously witty. The relationship between the siblings is complicated. After finding out that he is responsible for the death of the children, in a shockingly tense moment in the confines of his prison cell, Michal is suffocated by Katurian to save him from the pain of execution. The depth of emotion which both actors bring to the relationship is unfaltering and as Katurian desperately sobs into his brother’s lifeless body, the play reaches its pinnacle of despair.

The dark, confined layout of The Pilch Studio ensures a close intimacy between actor and audience. With only a hair’s breadth between the audience and the brutal scenes of torture, the piercing screams of Katurian ensures plenty of nervous tension. For a play founded on the nature of the relationship between storyteller and listener, this is an especially remarkable achievement.

With only a hair’s breadth between the audience and the brutal scenes of torture, the piercing screams of Katurian ensures plenty of nervous tension.

The simplicity of the set strengthens the play’s sinister aspect and intensifies the impact of the props used to create Katurian’s spine-tingling stories. In one chilling episode, the spotlight follows a life-size pink “Pillowman” as he leans his head, glides eerily across the stage and looms over the puppets of young children. Meanwhile, the commanding voice of Katurian recounts the story of the Pillowman who travels back in time in an effort to convince the children that to take their own life now would save them from a lifetime of future suffering. An uncomfortable allegory for the question of who deserves to be punished and one which underpins the progress of the play.

The Pillowman’s focus on the dangerous power of storytelling ensures the play’s self-consciousness. Katurian’s obsession with the idea that his stories must all have a “twist” means that nothing can be taken at face value, especially when the lines between fact and fiction are indistinct. This makes for a thoroughly arresting performance which suspends us between feeling too afraid to look but even more afraid to look away.

Image Credits: Graphic art for the Batavia, Illinois production of “The Pillowman” by Martin McDongah, design by Craig Gustafson