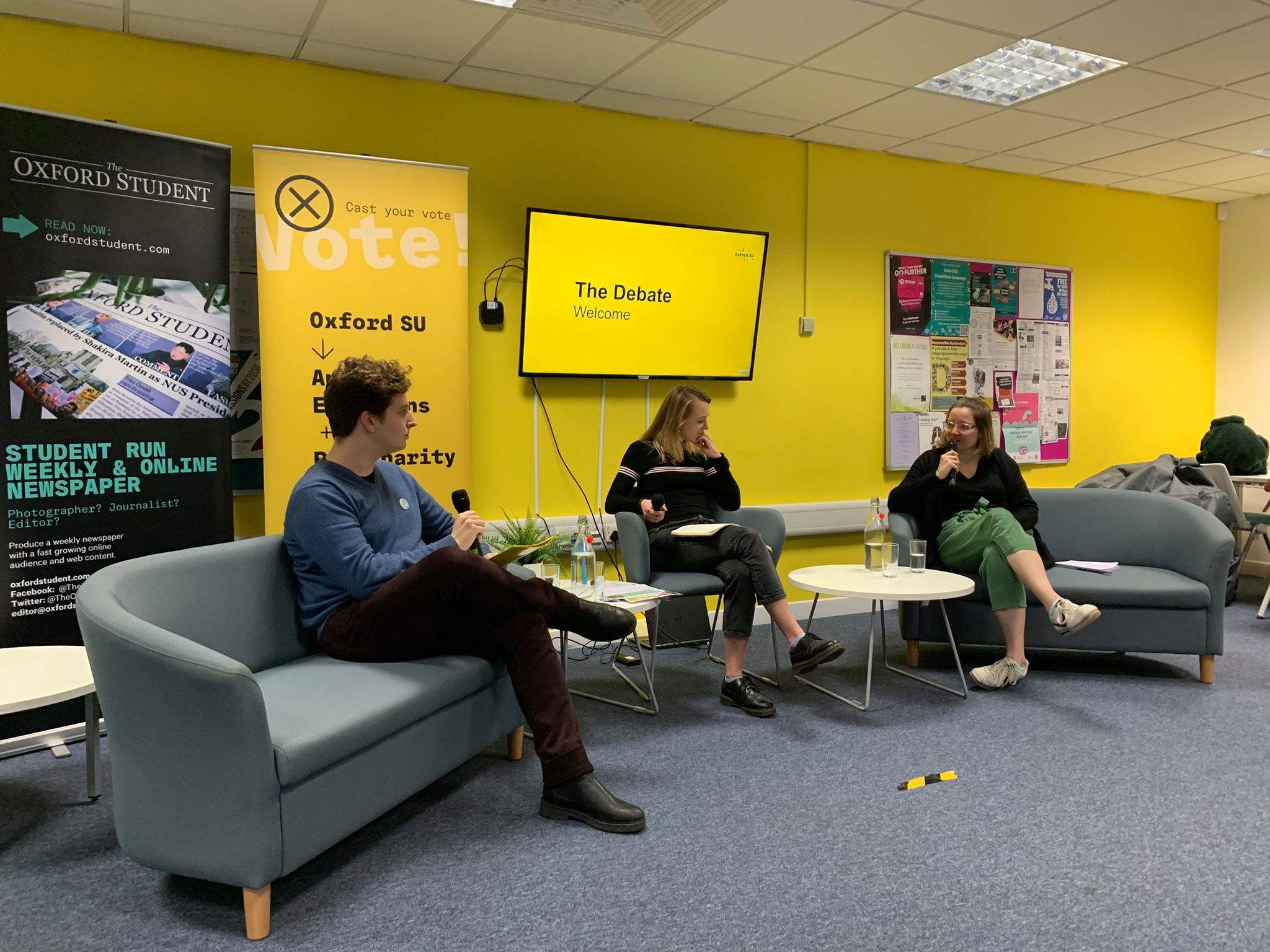 The Oxford University Student Union just concluded hustings for the upcoming leadership elections. Candidates for each role answered questions on pressing issues in a moderated Q&A session that lasted over 2 hours, with an unsettling revelation near the end as presidential candidate Nikita Ma was allegedly harassed on her way to the hustings.

Hustings began with a self-introduction by National Union of Students delegate candidate Maryam Shah (Magdalen). Maryam focused on her ‘experience, research and sincerity’ as she has given speech on issues with regards to her background as a BME student who has experienced mental health issues. She also hoped to show her sincerity through research into key areas in her manifesto. Maryam was the only NUS delegate and Student Trustee candidate present and questions moved on to candidates for the different Vice Presidential roles.

Lauren Bolz (Worcester), VP Graduate candidate and Ben Farmer (St. Catherine’s), candidate for VP Charities and Community run uncontested. Lauren stated that in her manifesto she wanted to run for VP Graduate and International extending beyond the official title as she felt internationals needed more support and wanted to let them know they were represented as well. She also shared her take on recent issues such as seeking to expand the waver for the 75-pound application fee for graduates to all countries and wanting to tackle the main issue of graduate loneliness as they can feel more removed from college and university life. Ben focused his campaign on issues with regards to the climate, homelessness and expanding volunteering opportunities. When question on whether he supported recent protests in St. John’s College on divestment, he said he wanted ‘students to be well supported in their actions and know how they can do so safely’. He also hopes to achieve plastic free by 2022 through environment and ethics representatives in individual colleges and lobbying central cafes and canteens in campus. Candidate for the other uncontested position of VP Women Alex Foley was not present.

Moving on to the contested Vice Presidential roles, Amelia Holt (St. John’s College) and Guosh Liu (Lincoln) are both running for VP Welfare and Equal Opportunities. Amelia is running with experience as her college’s women’s welfare officer and hopes to shift dialogue over mental health to actual assistance for students. Guosh draws on their experience in SU campaigns and thinks that welfare events are not enough to tackle marginalization over issues such as race or gender. When questioned both candidates took issue with current system of peer supporters, with Guosh believing that they are currently not held accountable after making mistakes and Amelia wanting centralized support for welfare officers to relieve pressure. Both also addressed issues regarding suspended students and graduate welfare.

VP for Access and Academic Affairs sees Tucker Drew (Brasenose) run against Poppy Price (St. Hilda’s) for the position. Both agreed on issues such as lecture capture and the introduction of a reading week. Tucker focused more on transparency of university finances and offering all students the choice to take exams with pen and paper or on computers, while Poppy placed emphasis on letting students know their rights when pressured too much by tutors and building a more modern perception of Oxford.

The Presidential role is contested by 4 candidates, Harry Sugden (St. John’s), Nikita Ma (Trinity), Richard Mifsud (Worcester) and Zoey Zhang (Brasenose). Harry stated he was driven to run for SU president as he loved his role as JCR president. He thinks this is what makes him stand out from the other candidates as he found a love for leadership late and wants to give it his all. He thinks the most important aspect of the presidency is to stand up against bad press of student politics. He envisions the SU to work as a coordinator between different colleges to engage students more through increased visibility. Zoey first came to Oxford as an undergraduate exchange student and has now completed two masters here, she believes her background gives her an edge in understanding different perspectives. She campaigns for a ‘culture positive week’ to celebrate diversity and her number one priority is to inspire and motivate other sabbatical officers, which she thinks she can do as she is ‘very genuine and down-to-earth’. Nikita was last to the stage as she stated she ‘was suddenly stopped by two students who proceeded to tell her angrily that she had no place at the Oxford SU’. This set the tone for her subsequent speech highlighting her current engagements with the SU on different aspects. She thinks there are barriers the SU currently fails to address such as problems with mental health strategy and setting up societies. Her central focus would be a good feedback system that she hopes to implement as ‘the most experienced candidate’. The last candidate Richard was not present.

That concluded a hectic night for hustings hosted by the Oxford Students broadcast team with Gemma Roper. Official voting period is from 11-13 February, all students are eligible to vote in this contested leadership election so remember to cast your vote before 6 pm on February 13th (Thursday).