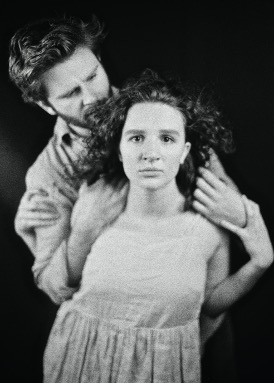 My first reading of Ajax was harrowing. This wasn’t like any other Greek play that I’d read. From the outset it was visceral and painful, full of striking imagery and haunting poetry and all I could see was a man gutted and bewildered by post-traumatic stress. Traumatised by the violence he had witnessed upon realising the emptiness of his victory, he takes to mutilating and brutalising sheep and cattle, believing them to be the men that were once his comrades. I felt strongly, however, that the play would be unlikely to succeed as a cohesive piece if performed on its own. Given the length of the play, and how relatively straightforward it would be to edit, it made sense to make it one half of a pair.

It was immediately clear that the other half of that pair should be Iphigenia at Aulis; Euripides’ stunning portrayal of sacrifice, lies and familial strife.  Like Ajax, Iphigenia explores the trauma and sacrifice of war but, uniquely, is set before the Trojan war, allowing substantial time to pass throughout the play. A before and after is evident therefore, giving actors the opportunity to explore how their characters might change (there is a decade gap between the two plays), while also giving the audience space to sympathise with the characters on stage.

Despite both being written by two foundational dramatists, these plays are very rarely performed. Aside from Timberlake Wertenbaker’s Our Ajax, there only seems to have been one production of Ajax in the last ten years (at The Space, in 2017), while the last major production of Iphigenia at Aulis was Katie Mitchell’s 2004 production at the National Theatre. Not only does this make our production unique, it gives us the opportunity to add to the production history of two wonderful texts that are more than worthy of attention.

We first approached those texts by translating the Greek and working closely with the originals. However, through a process of workshopping with the actors and continual redrafting, Shadows of Troy became its own text entirely and has radically departed from the original plays. Though our final text no longer bears much resemblance to Sophocles’ play, I sincerely hope that our audience feels just as I did when I first read Ajax. We have strived to ensure that the world of Shadows is populated by the same mysticism, otherness and sense of the epic that fill Ajax and Iphigenia, whilst retaining focus on what drew us to Ajax in the first place: what it means to witness and participate in unspeakable horror. We are aware of the gravity of treating such texts so radically, but hope that our contribution will be positively received, both as a scholarly and theatrical exercise. We want to tell a beautiful and discomfiting story and I am so excited that we have been able to assemble such a talented and passionate team to do that story justice on stage.

And what a chorus! Directing chorus is hugely challenging – we very quickly realised that there was no guidebook or set of instructions and learning out how to build our company of actors was a challenging feat. This chorus have an agenda, and they’re willing to fight for it.

This project is bigger than anything I ever thought I’d be capable of. Dealing with like leadership, trauma, sacrifice, revenge and faith was a daunting prospect, but the process of grappling with them has been a privilege. This is a really ambitious show and I’m incredibly grateful to everyone that has supported us. It’s brave and difficult and brings stories that can sometimes feel distant and other a little closer to us.

Shadows of Troy will be performed at The Oxford Playhouse 12th-15th February (6 performances with matinees on Thursday and Satruday). Tickets can be purchased at the following link: https://www.oxfordplayhouse.com/whats-on/all-shows/shadows-of-troy/13506?m=9&y=2019