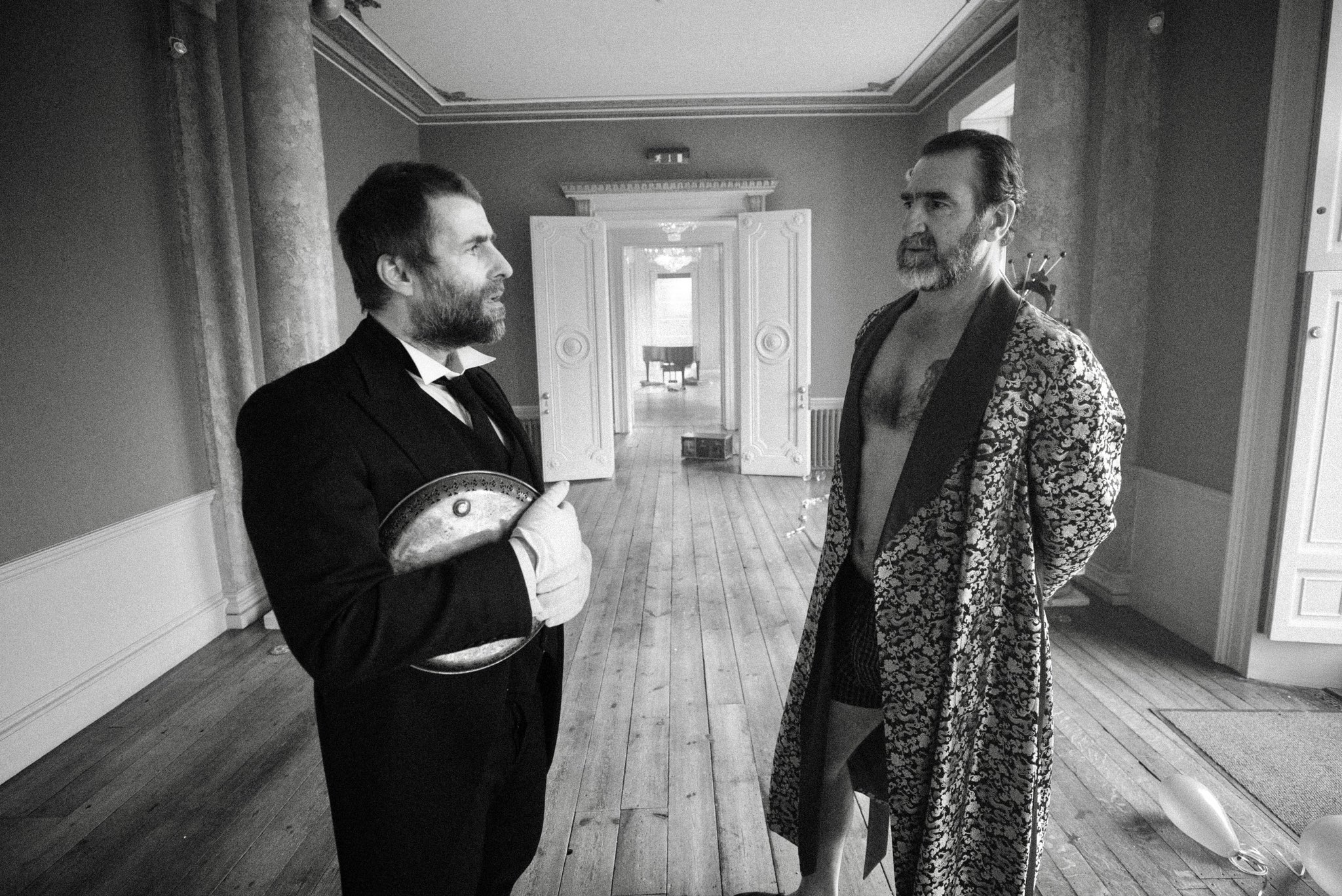 Image description: Eric Cantona and Liam Gallagher on-set for the ‘Once’ music video

The stage of this aesthetic car ride is set in its gory context with a slow-motion close-up of the Weeknd dripping in blood, channelling a joker like laugh while dressed (coincidentally?) in bright red. Flashing backwards, a shaking shot of the main character underneath the ‘Blinding Lights’ of Las Vegas sees him in a hallucinogenic-like state wandering the pavement, clearly intoxicated in some way.

Immediately, the shot changes to a more focussed version of the same man preparing to drive a sports car in downtown LA. Masterfully, the video uses camera movements to add to the storytelling, following the car smoothly even as drives recklessly, in contrast to the erratic movements it took filming a walking scene.

As the video moves forward, the dizziness ramps up, and the panning shots become ever blurrier and off-axis, complimenting the characters own fall into instability.

Appropriately, the video is filled with artful lighting: warm hues of red accentuated by green tones working in concert to produce a dream-like sequence of light trails. The meaning of the video itself is debated but is certainly a continuation of the “Heartless” music video set in Vegas. At first, one wonders if the injuries seen at the start are the result of a car crash, but we soon discover they come from the beatings of security. Indeed, the car ride is the product of a hallucination, being, perhaps as a commentary on the Weeknd’s own past struggles with drug abuse and his notable usage of substances to fuel his creativity. Whatever the case, this video is well-produced, links to the lyrics, and fits the upbeat tempo of the song: perfect for car journey’s or as a party banger.

Often touting himself as the last great Rock n roll music star, it is fitting that Liam cast the Rock n roll footballer, Eric Cantona, as the star of his new music video for ‘Once’. While the song has been released for quite some time, this new video blends minimalism with aesthetic, creating the perfect idea of a post-party come-down that this song suit very well. Eric ‘The King’ Cantona, begins sat alone at a dining table, served wine by his butler  (played by Gallagher) lip-syncing the song while the camera pans close and then slowly away. A table is revealed showing a number of wine glasses at various levels of full, a direct nod to one of the songs primary lyrics: “you went down so easy like a glass of wine”. Indeed, the wine seems to flow easy for Cantona as the camera follow him out of the room and down a corridor where he swigs from another already opened wine bottle.

‘Once’ as a song is about glory days gone for good.

Gallagher sings of “only [getting] to do it once”, a familiar statement to those who reminisce of glory days gone by. Indeed, for many Gallagher has had his own glory days, those of Oasis, where he was well-known for his brash behaviour and rock n roll partying. The stripped acoustics of ‘Once’ plays while Cantona walks alone in a mansion strewn with the remnants of a party, the glory times of the night before only pieces. The song is an ode to nostalgia: one can drink from the wine of yesterday but you will never uncork it for the first time again. The cinematography is also intertwined with this idea, as the entire video is a single-take tracking shot, thus timing and choreography had to be perfect.

No matter how much one might wish to repeat yesterday, it’s not gonna happen, but that doesn’t mean… your not still the King you were back then.

Gallagher’s song is a statement about getting too caught up in the past. No matter how much one might wish to repeat yesterday, it’s not gonna happen, but that doesn’t mean (as Cantona’s donning of a crown and cape suggest) your not still the King you were back then. As the song goes: “When the dawn came up you felt so inspired to do it again; But it turns out; You only get to do it once”.