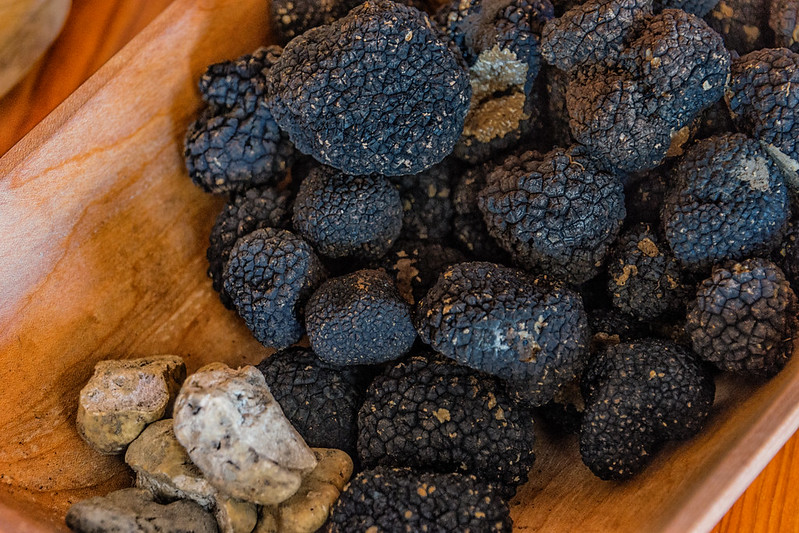 I knew you were truffle when you walked in

Truffle – that illustrious diamond of the culinary world. This rare subterranean tuber is not a thing of beauty – soot-black and bulbous. At first glance, it is difficult to imagine how it has attained its reputation as a gastronomic status symbol. But slice into it and you can reveal its appealing cerebral-like variegations, release its pervasive aroma into the air. Everything makes sense now. It is usually sliced, whisper-thin, to crown anything from an eggy Fettucine to a rare, quivering Filet Mignon. Elevating it to unsurpassable heights.

Its aromatic fug has been known to evoke memories of locker rooms and old socks. Why, then, does it taste so good? One can’t help but to become acutely aware of the inadequacy of language. Descriptions of its robust flavour include earthy, nutty, gamey, musky. The ever-sought-after umami. To me, it has an intoxicating olive-like inkiness. But no matter how delicious you find it, the question remains – why are they so darn expensive?

There are, in fact, several different species of truffle (including, and you heard it here first folks, a psychoactive one), although not all are worth eating. Put simply, the good ones are hard to find, they have a short season, and specific weather conditions are required to cultivate an environment for their growth. They are found within the soil, nestled up next to the roots of a great oak or hazelnut tree. They form a symbiotic relationship with these trees – each becoming instrumental to the other’s growth. Oaks give truffles sugars in exchange for extra nutrients and water, and this transaction cements them to each other. But not all oaks and hazelnuts have truffles growing in their shade, and this is why unearthing one proves so challenging.

In the past, female pigs were used to hunt for the elusive fungi. Truffles release pheromones into the air, which sows are so adept at sniffing out. The problem with pigs is that, being pigs, they tend to eat the truffles they discover. Suboptimal. Dogs, while less proficient at truffle hunting and so require intensive training, do not pose this problem. As a plus, they are also a lot easier than a pig to load in the back of a Jeep before setting out to forage for truffles.

Once a truffle has been dug up from the earth, the clock is on. They have a remarkably short shelf life, only adding to the problem of their steady supply. The evocative aroma of a truffle decreases significantly in the waiting, nearly halving within the first five days. Unlike a cherry tomato still tinged with green, or an unripe peach – time is the enemy. Since the best, the most esteemed truffles come from central Europe, shipping them across the globe wastes valuable time and flavour.

White truffles, the rarest sort, can retail from upwards of USD$3000 per pound. Even their slightly more common counterpart, the black truffle, sells for a head-spinning USD$900 a pound. All this for some fungi. In 2016, the world’s largest truffle weighing in at 4.16 pounds was auctioned off for the whopping price of USD$$61,250. And even then, it was considered a bargain.

Attempts at domesticating truffles have proven iffy. While white truffles have continued to elude cultivation, more success has been found in trying to grow black truffles. Trees first need to inoculated with the truffle fungus, and given high irrigation – but even then, truffles are never guaranteed. The push for their domestication has, in part, to do with their dwindling supply. Climate change has wounded the growth of wild truffles. Truffles do not favour the rising mercury, the plummeting rainfall. The ever-increasing loss of woodland has also affected them. And while up to 80% of the world’s black truffles are now cultivated – this has done little to make up for the lagging supply. Just another victim of global warming and we will be poorer for the loss.

But there is more to this seductive fungus that meets the eye. Hidden behind the glitz and glamour of haute cuisine, lies an underbelly, rich with fraud and deceit. Any lucrative trade is bound to spawn a sprawling black market, and truffles are no different. Counterfeits have become pervasive – the Chinese black truffle, for example, looks identical to the prized Perigord black truffle but barely matches them in flavour. They are often mixed in with the real thing, making it difficult for a restaurant to tell if a truffle delivery is indeed what has been ordered. The only way to definitively prove the difference is with molecular analysis – hardly practical. The practice of some restaurants to lock their best truffles away in a safe, buried in salt and rice, begins to make sense – when you find a good one, you protect it. In the hunt itself, the trade is cutthroat. There are reports of hunters slashing each other’s tyres, some going as far as poisoning each other’s truffle-sniffing canines, in the effort to deter competitors in the hunt. Secrecy is abound, the exact locations of fertile truffle hunting grounds are passed down like family heirlooms – mum’s the word.

If you have ever purchased a bottle of truffle oil, chances are the product you have does not contain a single sliver of truffle. Cheaper truffle products, oils included, tend to contain 2,4-dithiapentane – commonly listed on the ingredient label as ‘truffle aroma’ or ‘flavour’ or ‘essence’. While it is the active ingredient in our prized truffles, the chemical itself is not necessarily extracted from one. In the culinary world, this compound has split opinion. Anthony Bourdain was known for his dispassion for the ingredient, nicknaming truffle oil ‘ketchup of the middle class’. It has been criticised for its one-dimensional flavour, bearing only a passing resemblance to the technicolour of flavour a real truffle provides. Unworthy of being emblazoned with the truffle title.

Whether you adore truffles (or, like me, 2,4-dithiapentane – the only opulence my student budget can afford), or are disgusted with how a mushroom is regarded with such splendour, the fact remains. These little nuggets are a food of transcendent deliciousness. Brewing just below the earth’s surface lies a true testament to nature’s alchemy.