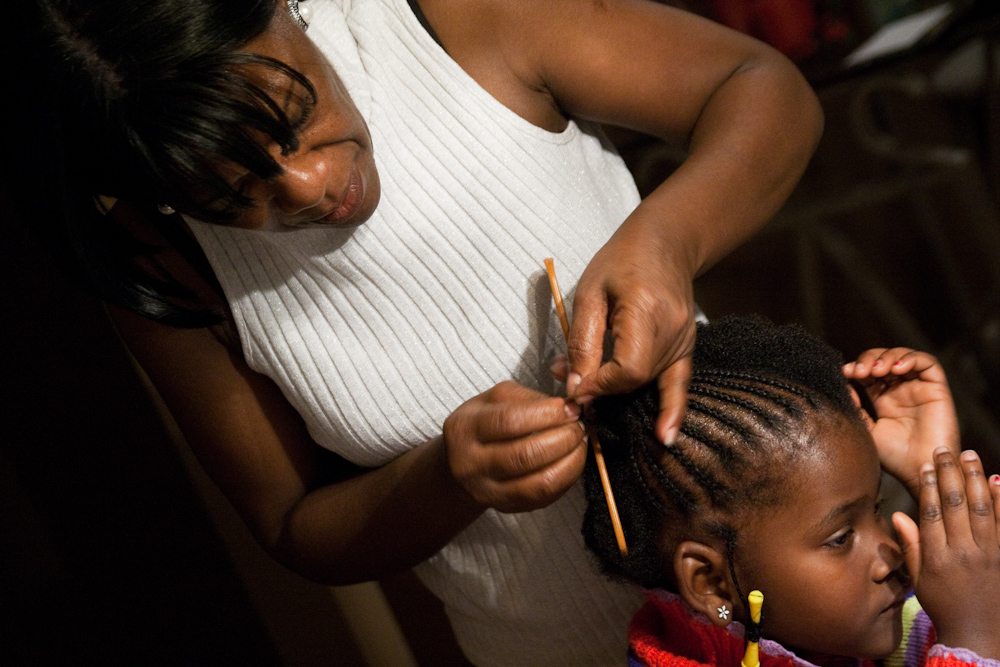 ‘Don’t touch my hair’ – the significance of ‘Hair Love’

Household chores and childcare were pretty evenly distributed in my house but if there was one thing that fell directly under my mother”s responsibilities, it was my hair. Some of my most vivid childhood memories are of me sitting between my mother’s legs, head lolling off to sleep and her hands lovingly braiding my hair. The room would smell like the various oils and leave-in treatments littering the coffee table, and I would catch the odd word from the television’s murmur in the background. These memories, mundane as they are, felt like the strongest demonstration of my mother’s love. Even as she complained about her back pains after sitting in the same position hours on end and even when she pulled my hair a little too tight into the braids, I knew when I walked into school the next morning, with little pink bobbles in my hair, I was loved and cared for.

The true power of “Hair Love”, for me, was how it transported me back to the little cushion between my mother’s legs. “Hair Love”, the Oscar-Winning animated short, spends six minutes and forty-seven seconds telling the heart-warming story of a black father learning how to do his daughter’s hair. Black stories on film often focalise (and rightly so) the trauma of blackness in the Western world – telling the important stories of police brutality, slavery and larger institutional racism, but what “Hair Love” reminds us is the strength of the black family, in the face of these struggles. “Hair Love” fights against negative stereotypes of the “absent black father” and brings him into the centre, flipping gender stereotypes, and creating a story that showcases black joy and black love.

From its inception, the short was destined for greatness. Matthew A. Cherry, the director and creator, tweeted almost a decade ago that one day he would be nominated for an Oscar, and the fact that he has achieved these dreams shows the power of manifestation. But perhaps, the story was destined for greatness because of the gap it was filling in the animation industry. Though films like “Home” (2015), “Moana” (2016), “Coco” (2017) and “Spider-man: Into the Spiderverse” (2018) have made great strides in diversifying the animation industry through non-white protagonists, there is clearly a long way to go in terms of representation in film. Young brown and black children deserve to have stories on screen that reflects their own reality and we can only hope that seeing the success of these stories will encourage more film studios to back them.

A short film like “Hair Love” that shows black hair in a positive light is so important, as the policing of black hair has always been a contentious issue for black people. Cases of hair discrimination has always been a part of the black experience. The examples are numerous, ranging from Giuliana Rancic’s comments about Zendaya’s dreadlocks making her look like “she smells of patchouli oil…or, weed” in 2015 to a case closer to home of Fulham Boys School’s policy banning “extreme haircuts including sculpting, shaving, dreadlocks or braiding”. Matthew A. Cherry and Karen Rupert Toliver took a stand against this hair discrimination by inviting DeAndre Arnold to join them at the Oscars. This was after he had been suspended from school when he had refused to cut his dreadlocks to meet his school district’s dress codes. Cherry and Toliver used their platform as Oscar winners to draw attention to the policing of black hair, advocating for the CROWN Act (Creating a Respectful and Open Workplace for Natural Hair), a bill to prevent discrimination of this type. In Cherry’s own words, “the Crown Act was a real-life component to the message that we were trying to get across with the short film”.

“Hair Love”, for me, is a snapshot of my childhood. But “Hair Love” to the young black girls and boys watching it today will be the film that allowed them to see themselves on the big screen.