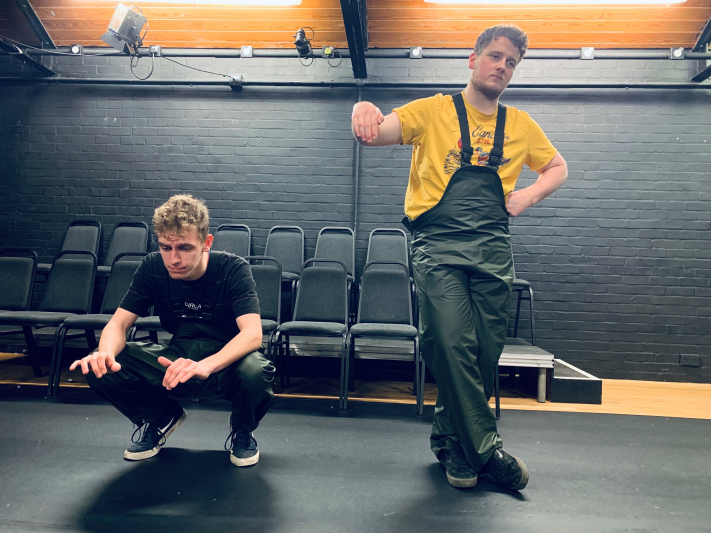 If the phrase “Soviet mime show” isn’t enough to convince you to spend £5 on a ticket to ÜnkelGårf at the Burton Taylor Studio, then that’s fair enough. I, however, am not a woman of the most refined tastes, and managed to sit through Tommy Hurst and Matt Kenyon’s last comedic venture Sübverse last term, so I knew that I would be in for a treat.

The premise is this – Ünkel (Hurst) and Gårf (Kenyon) are somewhat washed-up mime artists from the (former) Soviet state of Orgislavia, who have been recently exiled and are winding up their international tour in Oxford. For an hour, they relive their salad days, performing some of their most iconic mimes and reminiscing about the wonderful days they had under the rule of their great leader Petrov, before the untimely death of their former partner Simon (see what they did there?). Old tensions between the two emerge as we learn more about life in Orgislavia – the nuclear disaster that definitely did not take place, the tale of a lost prince who bears a striking resemblance to Ünkel, and the rise of their greatest rivals, the mysterious Gimp and Phat. Hurst and Kenyon throw themselves into the roles, excellently capturing the toxic relationship between the two mime artists and establishing a hilarious power imbalance between the blunt, assertive Ünkel and the more gullible Gårf.

Hurst and Kenyon’s excellent comedic chemistry is nicely accompanied by the use of a sheet on to which numerous video clips, each more bizarre and unsettling than the last, are projected. Through this, we are given a wonderfully stylistic Orgislavian history lesson in the form of black and white clips, an excellent touch to the piece. The scene-stealing cameos from Angus Moore, Frankie Taylor and Ali Muminoglu in this scenes break up the structure of the show and prevent Kenyon and Hurst’s verbal sparring from becoming stagnant, which is all too common in two-handers. This doubles as a screen behind which silhouettes of the two are cast, to a visually pleasing – and occasionally hilarious – effect. Acclaimed director Agnes Pethers – who makes her own cameo in a brilliant fourth-wall breaking scene – has certainly come a long way since directing Hamlet at the Keble O’Reilly, but the wonderfully inventive staging of ÜnkelGårf is only testament to her versatility and talent. Aside from the odd slip-up with lines, or missing a lighting or sound cue, the show was largely slick and the pleasantly unsettling energy of the piece was consistent throughout.

In short, I’m not entirely sure how to describe how I felt on my way home after the show ended. Confused? Certainly. Ashamed? Perhaps. Titillated? A little. These are, of course, all marks of a thoroughly entertaining, if totally bizarre, hour spent at the BT.