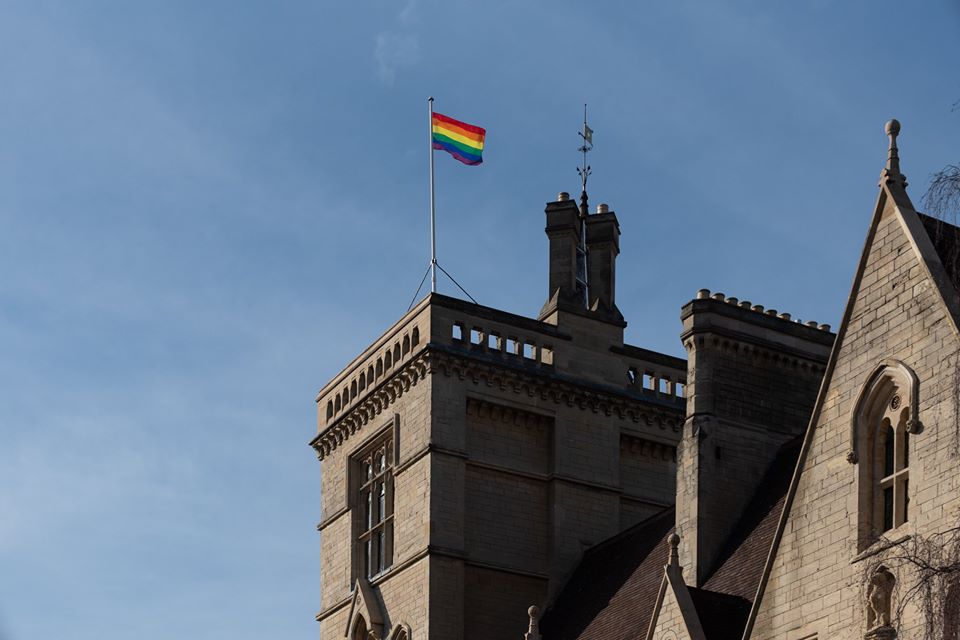 For the first time, Balliol College is flying a pride flag for LGBT History Month in its entirety. This has followed something of a prolonged battle between past student representatives and the college’s powers-that-be. To many students within and without Balliol, it might come as a surprise that a struggle ensued. It’s known as one of the more ‘lefty’ colleges, for a variety of reasons; the SU’s alternative prospectus claims (quite fairly) that Balliol has ‘a laid-back atmosphere and highly inclusive vibe’. As a queer student of Balliol College, I’m grateful to have always felt accepted by its community. I can look back at my first interactions with Balliol’s LGBT lot quite fondly. Visitors might have noticed, as I did in freshers’ week, a poster barring the admission of queerphobia through the doors of the chapel: ‘everyone welcome – yes, really’. The Balliol lion faces a half-crest rainbow flag.

Balliol – like two other colleges – claims to be the oldest Oxford college, and it can also boast of having produced more state leaders than any other institution in the world. As some, again, might be surprised to find out, one of those is Boris Johnson. The dear Prime Minister’s embarrassing homophobia is familiar to us all now: we might imagine an overgrown bully-boy lamenting that his college, his city, has been overran by ‘tank-topped bumboys’. God forbid, his chapel might one day create a union between ‘three men, as well as two men, or indeed three men and a dog!’ Of course, there are some Oxford students that might feel vindicated by his adverse reactions to the state of today’s world – but they are becoming increasingly rare. Balliol flying its pride flag shows that the tide is changing, and reflects the fact that throwing the f-word about on college grounds nowadays will get you a dirty look at the very least.

Balliol flying its pride flag shows that the tide is changing.

Many of us queer Oxonians are fortunate to feel supported by our peer groups. What we more desperately need is to feel publicly backed by our institutions – and not just because we pay £9,000 a year or more to attend them. Balliol is far from the only college to have been sheepish in declaring its support of LGBTQ+ students. In 2019, students at Queen’s were upset by the Provost’s decision to take down the college’s pride flag after just one week of History Month. It was only in the same year that University and Oriel first raised a rainbow flag. Shockingly few colleges deign to fly pink, white and blue for Transgender Day of Remembrance, one of the rare occasions on which time is devoted solely to the discussion of trans issues. The SU’s LGBTQ+ campaign reported last Trinity that 98% of transgender students have experienced an incident of transphobia while at Oxford. The need for our institutions’ public, proud support of trans students could hardly be greater.

This aside, we might wonder whether some colleges merely follow the lead of their more progressive counterparts. A college’s lonely spires in February have become an almost cringeworthy sight. The flying of a pride flag is in some ways a declaration of allegiance, but the underside of such a display is the abrogation of responsibility. Simply put, it is not enough. Colleges such as Christ Church fly the flag for the whole of February, while failing this year to make freshers’ week LGBTQ+ awareness workshops compulsory. It is essential that colleges use the weight of their money and authority to educate against queerphobia of as many varieties as possible. There is little point in these public displays if a college negates the needs of its trans students, its queer and disabled students, its queer students of colour. Colleges should not be able to claim solidarity without putting in the legwork.

Simply put, it is not enough [to fly a pride flag]…without putting in the legwork.

A pride flag raised above a college is far from an empty symbol. It speaks for who the space belongs to, acknowledges the diversity of its student body. It is easy to forget, once here, how carefully crafted are the public faces of Oxford’s colleges. Flying a flag should be a welcome step, but one not to be regarded without scepticism. The University has one of the densest populations of queer students in the country, and its LGBTQ+ community makes itself heard. But Oxford has always been queer, has always been a home to queer students and academics. Colleges cannot claim allyship without prioritising the most disadvantaged members of the queer student community.