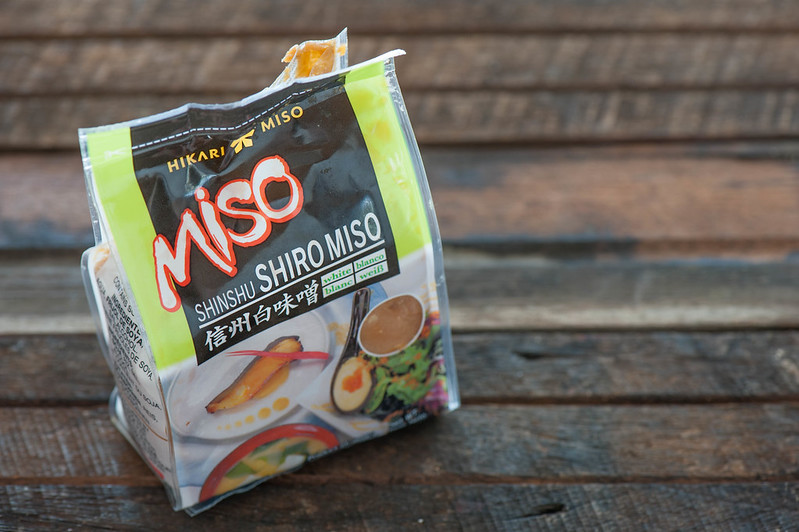 Miso soup, the quintessential Japanese dish. For the longest time, I had a tub of miso paste tucked neatly away in the corner of my fridge. I bought it at the height of my miso soup passion but it was now left neglected, with seemingly no other purpose in life. In an effort to find something else to do with it, I discovered that one of life’s greatest wonders lay hidden in the depths of my kitchen. My love affair with miso soup was on its last dregs, but my infatuation with miso paste had only just begun.

Miso paste is a fermented mixture of soy beans and a grain—rice or barley make a frequent appearance—inoculated with Koji, a type of mould. For the keen bean sake lovers: yes, the same Koji used to make the rice wine. This mixture is left to ferment with a healthy dose of salt, for a variable amount of time (more on that later). The mould breaks the beans down as it cultures, into a mixture of amino acids, fatty chains and simple sugars. The resulting concoction is deeply twangy, funky, an absolute umami bomb. And, as I hope I will be able to convince you by the end of this article, the secret ingredient that will bring you to unsurpassable culinary heights.

The colour, aroma, taste and pungency of a miso paste depends on a great number of factors. The conditions the paste is cultured in, for example, or the age of it. Even the geographical region in which it is let to culture plays a role – due to the different strains of bacteria available to lend a hand in the fermentation process

There is, it seems, a dizzying number of miso varieties, with over 1300 different types available, aged from anywhere between a few weeks to several years. But, in an effort to simplify the whole shebang (miso purists, please forgive my crude generalisation) they can be broadly broken down into two categories – sweet (sometimes called ‘light’) and dark miso pastes.

Sweet miso is the baby of the miso world. White miso paste (shiromiso) falls into this category. It is gloriously golden, the lightest of all the miso pastes – due to its higher percentage of grains. It has only had a several months-worth of fermentation, which is a heartbeat in the fermentation scene. The resulting taste is buttery, and mellow – and makes it, for beginners, the gateway drug. Or, for the adventurous, the best miso option in a sweet recipe.

Dark miso (sometimes called red miso, or akamiso), is the brooding older cousin, and more complex. Dark miso ranges in colour, from a dark brown to an almost-black. It has been fermented for a much longer time and contains more soybeans than it does grains. Time has made it deeply salty, earthy and robust. For this reason, it is the perfect ingredient to plop into a stew, or into a meat rub. It evokes memories of marmite, and indeed marmite is no stranger to a stew – providing the umami foundation upon which so much flavour is built.
If you avoid soy, fear not! There has been a recent influx of ‘new age’ miso. The hippies of the miso scene, if you will, and they can be made with anything from chickpeas, farro, adzuki beans, buckwheat, rye, millet, to… if the fermentation gurus of the internet are to be trusted… cookie dough. And while I lack the self-control to be in possession of spare cookie dough, I admire the passion for the cause.

Miso paste is a beautiful thing, not only because of its wonderful resonant taste, but also because of its versatility. Miso isn’t just for soup. Miso isn’t just for Japanese cuisine. You can use it in salad dressings, whisk it into marinades or brush it on as a glaze. Make a compound butter with it, and slather it onto thick wedges of toast. Use it in a sauce to bathe your noodles, mash it into silky potatoes. The line doesn’t end there. Desserts do equally well with a bit of the miso treatment. Swap out the salt in a salted caramel for a spoonful of this golden paste. You’re in for a treat.

As a fermented product, miso has a remarkable longevity, lasting almost indefinitely if treated with sufficient care. As a general rule of thumb, sweet miso is best if eaten within a year after opening – their fleeting fermentation period makes them a little less resilient than their darker counterparts. Dark miso, if left in sanitary conditions in the fridge, will practically last you forever. It will, however, darken over time, thanks to the powers of oxidation. But even this process can be hindered if you keep the surface of the paste covered neatly with a piece of baking parchment.

Another perk of being a fermented product: miso is jam-packed full of good bacteria. You know, the reason why yogurt is touted to be good for your gut? These bad boys are all over your miso paste. For this reason, if you are eating miso for its probiotic health benefit, you should avoid plunging it into a boiling stew or whacking it into the oven for a long braise. Instead, stir it into a stew right at the end, or brush it on as a glaze once most of the roasting is done. I admit to using the stuff, not for its ability to help my microbiome, but because it’s really, really tasty. So while I try not to overcook it, there will inevitably be situations where it cannot be avoided (in, say, baking a miso brownie). Taste trumps health benefit.

There is no better proof, than in the pudding, so I will supply you with what I have found is my favourite pudding to pair with miso. If there are any points awarded for a double pun whammy, I truly believe that this qualifies. I hope – no, I implore—you to give miso a second chance. It is not a one-hit wonder. In the words of Wild Cherry – Play that funky music.