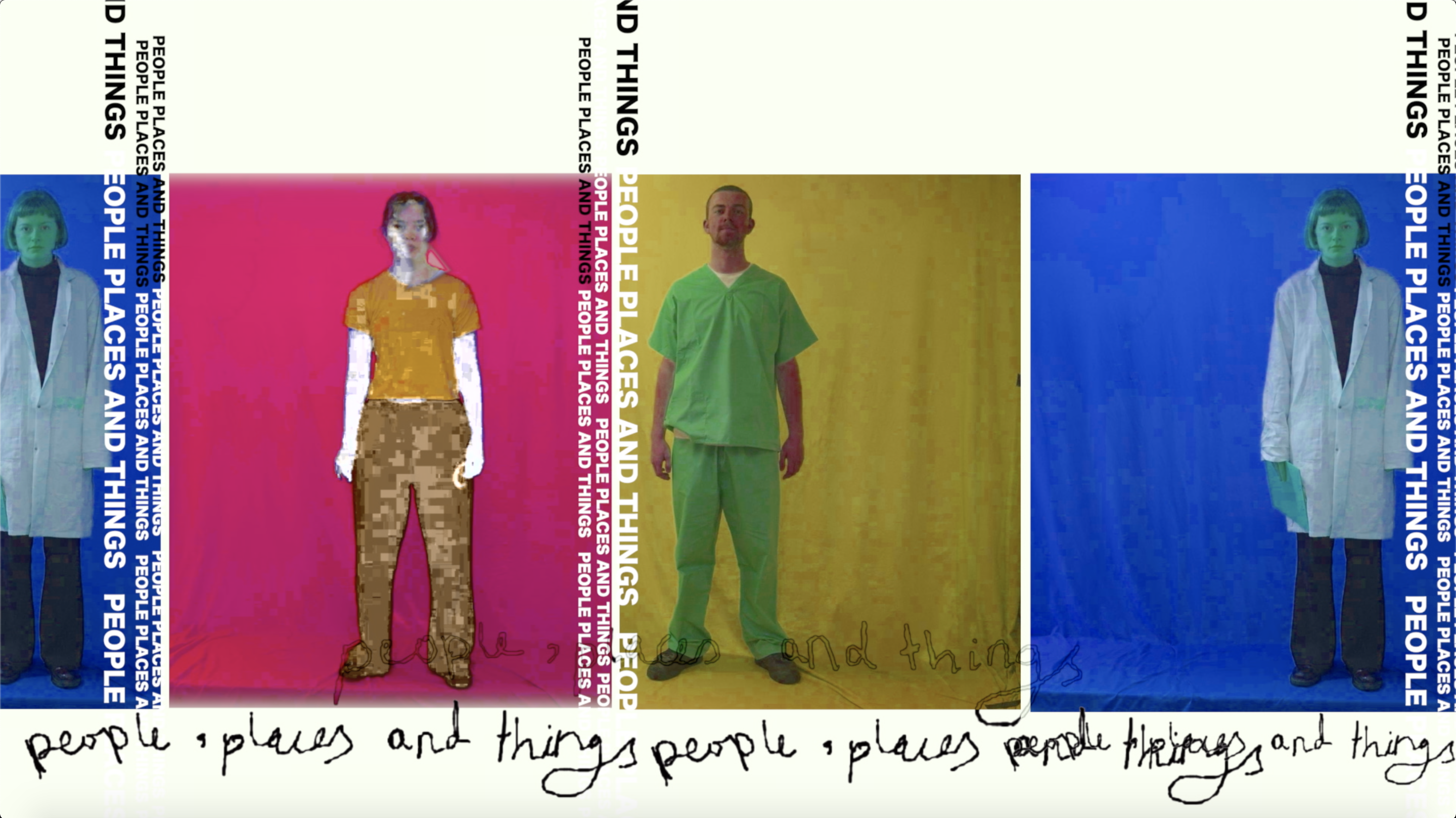 Last week, I was fortunate to have a ticket to a private performance of ‘People, Places, and Things’, held in the kitchen of a student house in Cowley. With the playwright – Duncan Macmillan – having not yet released the rights to the award-winning play, directors Ned Seagrim and Georgia Gibson opted for a private performance: meaning audience members could only attend upon invitation, and the evening performances went entirely without marketing or publicity.

Greeted by two nurses at the nondescript side door to a modern extension, the two-levelled kitchen, lit by red strip lighting and with calmly psychedelic music playing, it was immediately apparent that the performance would be unusually immersive: with some audience members – out of the total 21 – sat on kitchen countertops, and others in chairs around the edge of the room, this was quite unlike any other performance space I’d seen before.

The compelling performance began with the holding-up of a white bedsheet by the two nurses from the doorway, onto which a projection was played: a dialogue between two actors, one of whom – our protagonist, Emma (played by Martha Harlan) – suddenly dissociates, forgetting her lines and becoming alarmingly panicked. Suddenly, with the drop of the sheet and the turning-on of a few lamps, the same actor whose breakdown the audience just witnessed walks into the space, on the phone to her mother, hurriedly asking her to hide a plethora of substances hidden in various locations around the house.

With some audience members – out of the total 21 – sat on kitchen countertops, and others in chairs around the edge of the room, this was quite unlike any other performance space I’d seen before.

After this introduction, the play focuses largely on Emma’s stay in a rehab clinic. Checking herself in, she meets the light-hearted male nurse, Foster (played by Gregor Roach), and the two begin her intake form, as she starts listing the never-ending number of drugs she’s taken recently, revealing that she was high when driving to the clinic, and still high even in that very moment.

A sense of nervous anticipation is created as Emma asks Foster about the difficulties of becoming un-reliant on the drugs, before integrating into the wider system of rehabilitation by joining the therapy group with the other patients: there is a dreadful sense of inevitability in the suffering – intense illness and hallucinations – of her detox, as we realise that this is something she must endure, or otherwise die.

As the play goes on, Emma strikes up a difficult relationship with her doctor (played by Laura Henderson-Child), and reveals her disillusionment at the whole process, protesting against the practises of the clinic and responding to her voluntary ‘clinical captivity’ by allowing an intense identity crisis to bubble up, starting to question the meaning of individualism and even the existence of an omniscient God. At the very core of her struggle, she professes: “I will not be reduced to the things that happen to me or decisions I’ve made”.

As the play goes on, Emma strikes up a difficult relationship with her doctor (played by Laura Henderson-Child), and reveals her disillusionment at the whole process.

After Emma makes progress and slowly becomes ‘clean’, with the help of another patient, later turned male nurse – Mark (played by Cameron Forbes), she eventually enters the therapy stage of her stay, being introduced to the other characters – some of whom played by the wonderful multi-rolers, Hannah Taylor, Cecily Brem, and Christian Gateley. A fundamental part of the groups’ recovery is psychological, something which they address through ‘practising’: playing figures in each other’s real lives, apologising for past mistakes, etc. The play’s focus on ‘practising’ brings to the forefront the issue of identity as the characters – mainly Emma – are forced to explore identities other than the ones they’re each hiding from.

Indeed, Emma, who struggles most with acknowledging herself, says of the ‘practising’: “none of it’s real … just chaos”. Emma is suddenly able to understand the pretence of her own character which she had been presenting previously to those around her, fabricating sexual abuse or the traumatic details of family members’ deaths to try and explain her addiction. As a stage actress, it is evident that Emma has been using performance as a means by which to hide from herself: “If I’m not in character, I’m not sure I’m really there”. Ironically, it is through ‘practising’ in real life that she is able to find her ‘true self’ once again.

Eventually, Emma ‘graduates’ from the clinic, retuning home after a long and taxing stay. We are finally introduced to her mother and father (played also by Henderson-Child, and Harry Berry), where we have an insight into the truth of her home existence: parents suffering from the death of one child and the similar loss of another – their resentment over Emma’s insincerity is clear. Rejecting the “cult” of her new identity, a confrontation with her mother culminates with the dumping a box of alcohol cans and bottles, as well as drugs – those hidden at the beginning of the play – on the floor, presenting Emma with the opportunity to relapse: in the place she associates most with her substance abuse, with the people and the very things themselves (giving meaning to the title of the play), her ability to finally walk out the door ends the play with the proof of her final conquering of her addiction and, with it, acceptance of her new, ‘healed’ identity.

Seagrim and Gibson’s interpretation of the play was wholly compelling. I was struck by the remarkable feeling of the small, ‘in the round’ performance space, in its creation of an intensely intimate atmosphere, as well as its crafty utilisation by the cast, with medical certificates being put up on the fridge and pills being removed from the surrounding kitchen cabinets in the medical scenes, for example. Far from inhibiting the players, the claustrophobia was embraced: even the real props – the genuine ‘Alcoholics Anonymous’ books and actual, smoked cigarettes – all add to a sense of unique immersion, as the intimacy of the performance space necessarily allows the cast to transcend the limits often placed on student drama. Moreover, while the ‘secrecy’ brought about by the play’s privateness might have been a secondary factor, it nevertheless enhanced a profound vulnerability and closeness to Emma, as we, the audience, were made to feel privileged to witness her personal transformation through recovery so closely.

Her [Emma’s] ability to finally walk out the door ends the play with the proof of her final conquering of her addiction and, with it, acceptance of her new, ‘healed’ identity.

Moreover, the hallucinatory visual effects – courtesy of Alice Wade – were especially absorbing: with regular projections swimming over the walls and ceiling, coloured lighting and the use of deep, rattling bass in moments of Emma’s dissociation and intoxication, the audience was regularly forced to experience the rapture of the physical and mental struggles in detoxing, a process said to take between “twenty-eight to ninety days”.

The cast should be praised, for they thrived in such an unusually enclosed space, performing with intriguing and convincing expression throughout; while the acting of Harlan and Henderson-Child was especially convincing, with the two’s onstage ‘chemistry’ suiting the strange push/pull relationship between Emma and her Doctor – who she views as her intellectual inferior, despite the Doctor “trying to save [her] life” – the multi-roling of the other cast members kept me intently focussed, with changing accents and mannerisms making it an exciting challenge to keep up – yet simultaneously representing Emma’s detox-induced confusion, which the audience are made to share.

The cast should be praised, for they thrived in such an unusually enclosed space, performing with intriguing and convincing expression throughout.

In short, it was a delight to have attended the private performance, a fascinatingly unique experience and one in such an unusual performance context that the acting, visuals and direction of the play were made all the better. I would recommend going to see the performance, but you wouldn’t find tickets…