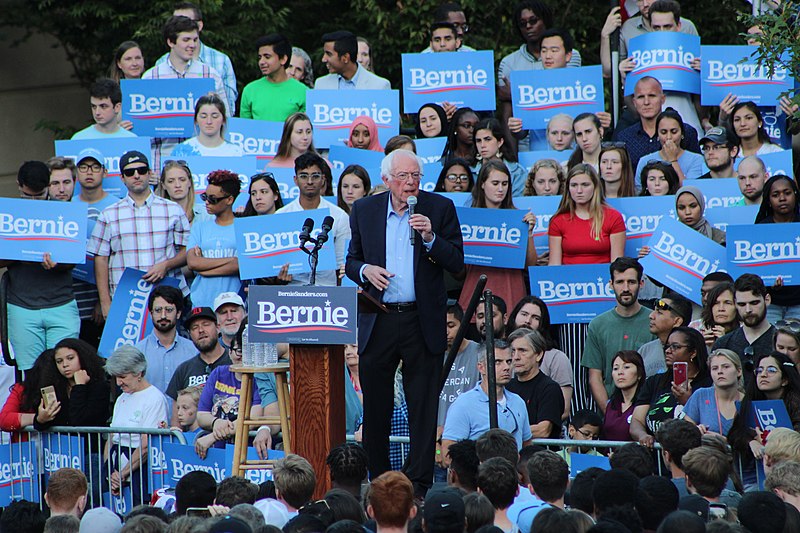 The race for the Democratic Presidential primaries is still wide open, yet until last week there seemed to be a frontrunner for the nomination, certainly in terms of delegate count. Firstly Iowa, then New Hampshire, and then Nevada had fallen under this wave of support for Bernie Sanders. The Vermont Senator, who remains an Independent,  led the delegate count ahead of Biden, Warren, and Buttigieg and Klobuchar. The results from Nevada were even more staggering. In Nevada, Sanders won with an incredible 40.5% of the vote, with Biden in a distant second place with 18.9%. The party establishment remained astounded by the rise of someone who is not even a registered democrat, and whether it was too big a risk to nominate him against the incumbent Trump. With South Carolina, all changed. Biden won, and won with a big margin, and like a domino effect both Buttigieg, and Klobuchar dropped out – proving that the Iowa Caucuses really did not matter. This spells a real problem for Sanders.

With South Carolina, all changed.

Biden’s victory in South Carolina has propelled him to the front stage, now endorsed by both Buttigieg, O’Rourke and Klobuchar. The Dems are hence at a crossroads. Democrats have two paths for gaining the Presidency, and perhaps control of Congress – the ‘Rust Belt’, or the ‘Sun Belt’. Arguably, Sanders could potentially turn the ‘Rust Belt’ states blue again. In states like Iowa and New Hampshire, with predominantly white populations, or with strong working class regions in states such  as Wisconsin, Pennsylvania, Ohio, Michigan, Indiana, and Illinois, Sanders could really bring back disillusioned former Democrats. These were states hit by economic decline, lack of investment, and de-urbanisation. Detroit for example, lost 29.3% of its population between 2000 and 2018. These are areas which voted for Donald Trump in 2016, against Hillary Clinton, who for them represented the establishment which neglected them for so long. The question is whether Trump’s failure to address the problems in the Midwest, despite a strong showing of the US economy, and Sanders’ long time connection with working class battles, will be enough to convince those states into voting for Bernie in 2020.

The alternative is the ‘Sun Belt’, ranging through Southern states such as Alabama, Arizona, Arkansas, Florida, Colorado, Georgia, the Carolinas, Tennessee, Nevada, Louisiana, Kansas, and Texas. Within these, Texas, Tennessee, South Carolina, Georgia, Arizona, and Arkansas, are likely to be held by the Republicans, yet the Democrats have a shot with the others. Alabama, despite having voted for Trump, now has two democratic senators, after Trump’s own candidate, Judge Roy Moore, was defeated by the Democratic Doug Jones in the 2017 Special election. Louisiana will be harder to turn, yet it voted for Clinton in 1996, and currently has a democratic governor, similar to North Carolina, which voted for Obama in 2008, and went blue in the 2016 gubernatorial elections. Kansas will unlikely switch, yet the Democrats have won key gubernatorial elections there as well, however the democrats will likely hold Nevada, which Clinton won in 2016. These are swing states, which require a strong candidate which can appeal to both democrats, and moderate republicans. Elections can be decided in these states, such as Florida, which voted for Obama twice. Perhaps Sanders, learning from the lessons provided by Corbyn in the UK, would not be able to turn these states blue.

These are swing states, which require a strong candidate which can appeal to both democrats, and moderate republicans.

Depending on which path they take, the Democrats will need a different candidate. Undeniably Warren could appeal to those ‘Rust belt’ voters, yet her chances of winning are minuscule, since the ‘left-wing’ lane of the race is occupied by Sanders. On Super Tuesday, Sanders only managed to grasp California, Utah, Colorado, and his native Vermont, while all the rest was swept by Biden, even Warren’s Massachusetts. Last week the story was about moderates having to clear the lane for Biden, yet this time the problem is Warren. A problem for Sanders. Warren’s refusal to leave the race, will only reduce Sanders’ chances of being elected, with Biden gaining massive momentum. Bloomberg has essentially been neutralised by Biden’s victory. The Bloomberg campaign was essentially, an enormous waste of money, and now even he has dropped out of the race and endorsed the new frontrunner. Biden could really lead a new southern strategy, to regain the White House. However, what the democrats need to learn from 2016, is that they need a stronger turn out – something Biden, unlike  Mike Bloomberg, could deliver. The democrats simply will not win, with a democratic equivalent of Trump.  Instead, Biden is now leading the delegate count by a large margin, propelling him far closer to the nomination.

What the democrats need to learn from 2016, is that they need a stronger turn out – something Biden, unlike  Mike Bloomberg could deliver.

Sanders’ base within the party is strong, but the problem for him is the Democratic establishment, which is now no longer doomed to make the same mistakes made by Jeb Bush, Kasich Graham, Rubio, and the moderate Republicans in 2016. Buttigieg, Bloomberg, and Klobuchar have left the race, all now campaigning for the former Vice President. This means that a 2016 scenario – with an outsider picking up each state one by one, until he becomes truly unstoppable – is now truly unlikely.