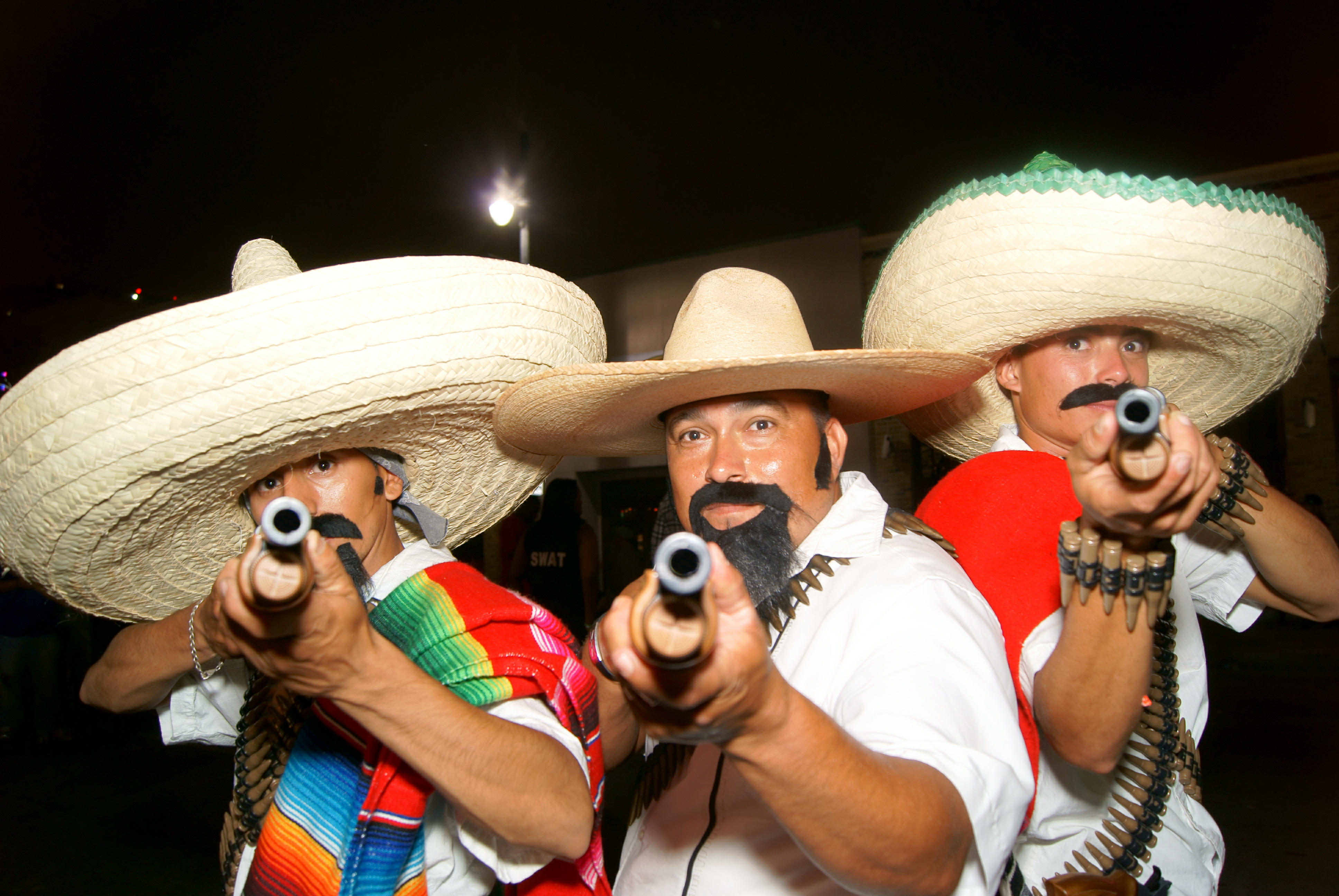 White men dress up as a caricature of Mexican culture for Halloween.
Identity
·5th March 2020

Recently, I had a conversation where the statements “people are too PC these days…especially about cultural appropriation” and “no one bats an eye when you wear a French beret” were thrown around.

What a simplistic take on such a complex issue. It’s upsetting to hear in 2020.

Terms like cultural appropriation or microaggressions have become ubiquitous in today’s society. At once, they are intellectualized to the point of abstraction, (the very real pain they describe becomes divorced from the discussion) and also weaponized against the people whose experiences they were made to articulate.

Cultural appropriation is ultimately an issue of relevance due to cultural power dynamics. In our world, cultures are hierarchical, with white Western culture landing at the top. European colonialism is arguably the largest factor that has contributed to this hierarchy, and because of this, even countries that don’t have a large white population, such as China, plaster pictures of white models and European beauty standards as an ideal to emulate. White supremacy, white nationalism, and cultural racism are so prevalent that it can often become difficult to discern. Culture doesn’t exist in a vacuum, necessarily, there are different levels of oppression that people of minority races face in simply expressing their culture.

Personally, growing up as a Chinese-American, I was teased for the food I ate, the language I spoke at home, the cultural clothes I wore during the holidays, and every other trace of my culture that made me seem different, like the “other.” It was essential for me to remove these traces from my identity to prevent myself from being reduced to purely that. And I was one of the lucky ones; I grew up in an extremely “progressive” area with a large Asian population within the white majority. In comparison, no one in their right mind would ever tease an American with French heritage, or reduce them to that, because as a white person, they not only fit in with the majority physically, but their culture is something that is well-integrated and well-understood (with largely positive connotations) in American society.

To highlight an example, I will explain why something that seems as trivial as a Disney character/Halloween costume still holds significance to people like me.

In my childhood, I would always say my favorite Disney princess was Belle, terrified of the box my peers tried to put me in due to my race. To no avail, they would still tease me and ask, “When are you dressing up like Mulan?” Even my close friends would chirp at me, “I know what Katherine’s favorite princess is, of course, it’s Mulan! You look just like her!” while we bounced around on the playground. But I wouldn’t ever want them to see me as the “other,” as different from them, so I admonished, “Of course not, I hate Mulan!”

It’s not about Mulan herself, it’s about the assumption based on my race. When Halloween came around that year, my blonde, white friend could delight in dressing as Mulan. Meanwhile, I would be horrified if my mother even suggested that I wear an authentic qipao, a traditional Chinese dress, to school. My friend could enjoy something related to my culture, and while I technically could, I wouldn’t want to.

Personally, I don’t think it was an issue of cultural appropriation for my friend to dress as Mulan, as she was dressing as the character without using yellowface. But, there is an issue in the clear privilege of how “cool” she seemed for dressing as the character (her friend commented, “I just love how you did the chopsticks like that in your hair”), compared to the dirty looks that these kids would give to the Chinese moms who wore qipaos for Chinese New Year.

It’s “cool” when a white person partakes in your culture, using it as an accessory. The foreign aspect of the culture they are celebrating is easily seen as something separate from their identity. On the other hand, as a minority, partaking in your own culture immediately separates you as someone foreign, as someone different. You can’t separate the practice of your culture from your identity, and therefore, practicing your culture associates yourself, your identity, with all of the racial stereotypes and negative connotations that follow.

Children feel the need to fit in; it’s a survival instinct. When you look like me in a Western country, you already stand out. Of course, you would do anything you could to make yourself fit in, to make your life easier, even if that means denouncing your culture. Children are ignorant, and I don’t hold anything against my elementary school classmates. On the other hand, I can’t disassociate the oppression I’ve felt in my life and the struggle I’ve gone through to appreciate my culture.

So when someone tells me, “People are overreacting by crying cultural appropriation for [blank white person] doing/wearing [blank cultural garb],” it is purely ignorant to think there should be no reaction at all.

Yes, cultural appropriation can go too far, and I know an essential part of our world is interacting with other cultures and benefitting from cultural diasporas. Sure, I know we all use parts of other cultures in our daily life, from everyday utensils such as paper and ink.

Nevertheless, the issue is much more complex than that. Things like paper and ink have already lost their negative cultural connotations. If we could get to the point where all cultures maintained the same level of respect and understanding, without trivializing the history of the culture, I don’t think cultural appropriation would be an issue. But the reality is, our world isn’t like that today. And visible indications of your culture, such as cultural clothing or even cultural names will cause you to face discrimination.

Again, I feel so much joy and pride when people truly appreciate Chinese culture, instead of mocking it or calling it “disgusting.” I’ve heard enough of that in my life. I appreciate how trendy it is these days to learn languages like Korean; it’s definitely preferable to the alternative. But, there’s still an issue, something wrong with dismissing my rightful feelings, as if I have no basis for pointing out the double standard. It is beyond frustrating to see something that has been seen as “disgusting,” “low-class” or even just “weird” your entire life become a novel accessory for a white person. Yes, it is progress to see your culture slowly become appreciated instead of being associated with those nasty connotations. But again, the racial and cultural superiority is highlighted when it takes a white person to “elevate” your culture and make it “cool.” Saying that people are crazy for having a reaction when their sensitivity is based on years of oppression and racism that you may never experience and/or truly understand is simply a lack of sensitivity.

The double standard may seem blatantly obvious for minorities, but it may take more scrutinization for white people to notice. One clear example: when black people wear dreadlocks in their hair, they are fired from work, removed from school, discriminated against in countless ways, (see: Hair Love), meanwhile, when white people wear dreadlocks, it’s for a high fashion show (see: Marc Jacobs in 2016), or they’re trendy hippies ready for Coachella.

I want people to appreciate other cultures, and it would be naïve to say that we don’t all do so in our everyday lives. The important distinction is that we must first recognize where these cultures come from, who should be credited with these cultures, and be sensitive to the history of racism and oppression.

Beyond these nuanced, morally gray situations, it’s obvious that partaking in a culture in an inappropriate or disrespectful context is not only cultural appropriation but blatant racism.

When a white girl wears a qipao as her prom dress, wearing the traditionally loose garment as a bodycon dress with a high slit, that’s cultural appropriation.

When American country music singer Kacey Musgraves wears a Vietnamese áo dài without pants to be “sexy,” that’s cultural appropriation. Not only that, it is quite hurtful to a race that has already been hypersexualized in Western media.

And when white people wear hairstyles meant for black hair such as dreadlocks, that is cultural appropriation…(and not meant for their hair type anyways; trust me, it’s not a good look.)

I’m tired of having this conversation. Sadly, this is an issue that has barely progressed since I wrote a similar story for my high school newspaper in 2017, and critics have yet to realize the intricacies of this topic. Of course, social issues and race are extremely nuanced, so it naturally follows that the issues regarding these concepts are nuanced as well.

to be a cultural minority in Western culture. Of course, the guiding concept you should use as a gauge is respect; of course, it is always beneficial to learn more, but it is not necessary to be an expert on other cultures to partake in them. Even “experts” may understand the historical context, but not the racism and difficulties associated with that culture in the present.

There’s a difference between wearing a kimono to a Japanese tea ceremony and wearing one to a nightclub.