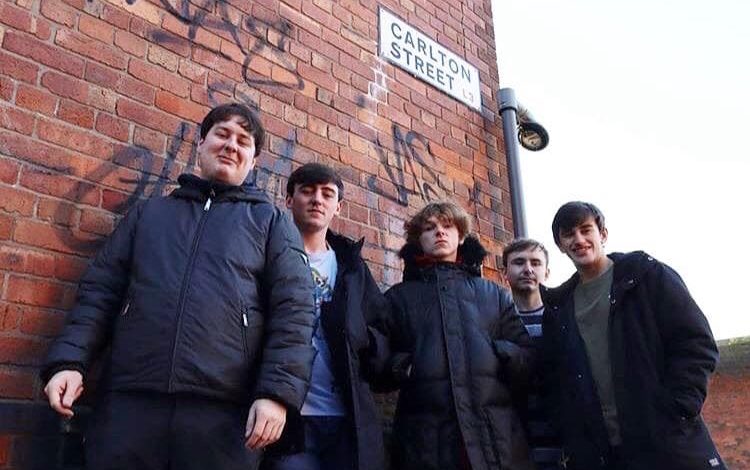 Being in the student bubble can be nice sometimes. Not having to come to terms with what’s going on across the country: coronavirus, brexit, another 5 years of Tory rule, and all the rest. All the same, I reckon I’m not the only one that has on occasion thought about my hometown with great fondness. Now don’t get me wrong, I’m grateful for having been afforded, through uni, the opportunity to listen to big band jazz and cello concertos in e minor; but forgive me for saying that there is something, exactly what is hard to put into words, but definitely something that Duke Ellington and Vivaldi in all their prowess, can’t quite capture as well as 5 scouse lads getting up on the stage and smashing it for half an hour, transporting themselves and everyone else with them into a different world altogether. Therefore, it’s no surprise that when the time rolls around for a new single release by The Sway, superb new prospect in the Liverpool music scene, it comes as a very welcome portal back into that atmosphere, even for just three-and-a-bit minutes. Having followed this band for a couple of years now, it’s great to see them having success at home and beginning to record their music. For The Sway, Liverpool is home, but their music transcends this fact alone, carrying a universal message, one which I can’t hope to write in an article with a word limit and a deadline. The best I can do is to say that these lads understand the futility of words at times when music says so much more. Which is to say, you’d have to listen to understand.

Their greatly anticipated second release, Changing, came out on all platforms on Friday at midnight and has been met with tumultuous acclamation, already making it on to BBC introducing on Saturday night. The vocals are simple yet the distinguishable scouse accent adds an undeniable charm. The song is catchy, youthful and creates familiarity without becoming predictable owing to the inexact repetition of the chorus. A gradual addition of instruments throughout adds a real sense of progression, exemplified in the second half of the song when the drums revert back to double speed. True, this is only their second release to the wider world, but already, with Step Right and now Changing, there is a clear pattern emerging, a harmonious blend of the sounds Liverpool has revelled in for 60 years. A pattern which anyone who has seen The Sway live in the last year or so would certainly have foreseen. With guitar licks to rival smooth jazz, undertones of keys and melodic bass, they’ve certainly invented a sound for themselves which is ridiculously easy to listen to, recognised by some as a revival of Mersey beat; but it’s not even that, because everything about them is unique.

Everything about them is unique

Anyone who knew The Sway going back a few years might be greatly surprised by this reinvention of themselves. It seems hard to believe now, that they haven’t been producing this sound forever, with so much effortless synchronicity on stage, and this unison definitely comes through in their latest track. But the truth is, a few short years ago, the same band was writing a very different style, somewhat more like punk rock, verging on protest music demonstrating their anger with political injustices, but to what extent their eagerness and unripened sound was present is debatable.

When I sat down with the lead guitarist, Ciaran Smith, he told me how the creative process has changed as the band has grown ‘We’re at that stage now where we’re getting better and better with every gig, and as a result we’re writing more tunes than ever.’ Perhaps Step Right, their first single, released in October, is meant as a metaphor for the evolution of the band. Taking a step away from what they were creating, not a betrayal of their roots, but rather a maturing of their style, and indeed, to all who’ve seen them live, this anger previously contained in their performance is still there, but now it’s been harnessed.

The anger previously contained in their performance is still there, but now it’s been harnessed

The message might even be described as absurdist: ‘It’s too easy to be down’, not suggesting everything is how it should be, but facing the challenge optimistically all the same. These lads find solace in the company of each other and the company of their music, ‘It’s boss all being mates in the band. Though we’ve all grown up and had different experiences we’ve stayed close.’ Says Ciaran. They invite the spectator or the listener to join them and escape from the less than adequate world in which we live. Undoubtedly, there’s something idealistic in their dreamy sound.

Undoubtedly, there’s something idealistic in their dreamy sound

With three lads happy to get on the mic and write songs in Ryan Mcnee (lead singer) Ciaran Smith (lead guitarist) and Aidan McClean (keyboard) and rhythmic foundation and percussion provided by Sean Knibb (bass) and Harry Robertson (drummer), they really are the full outfit. Proud of their heritage, proud of their background, childhood best mates, it is a real pleasure to watch The Sway play and see how far they’ve come. The fact this is what they do, what they’ve always done and what they love, tells me they’re not going away any time soon. As Ciaran says, ‘We’re excited for the future, to keep growing and improving.’ So, let’s hope this is only the beginning for these lads. ‘Changing all the time’ sums it up quite succinctly really.