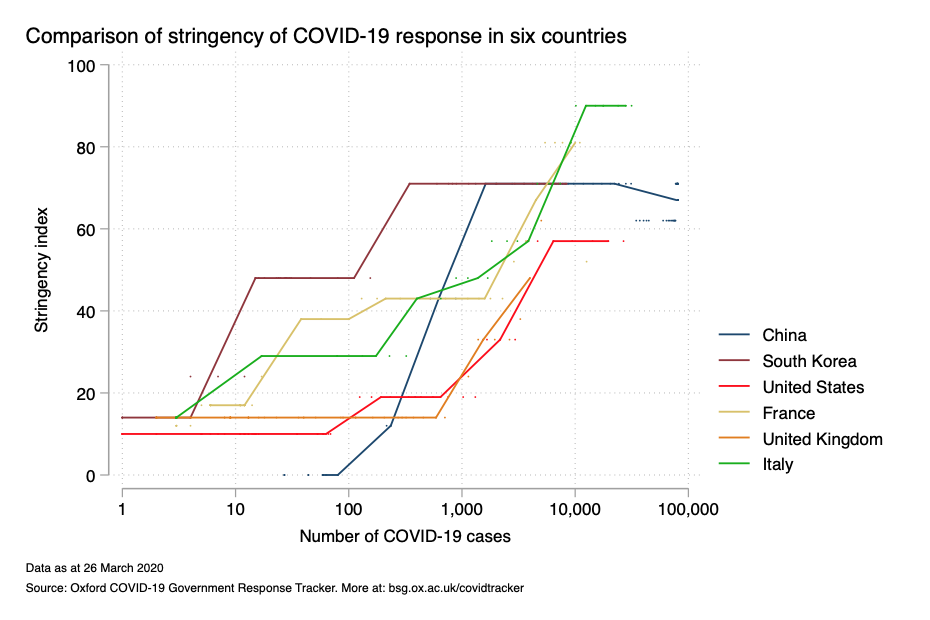 Researchers and students at the Blavatnik School of Government have launched a tool designed to track government responses to the COVID-19 epidemic. The first tool of its kind, the tracker will collect publicly available data from 73 countries.

It is anticipated that more countries will be added to the list, which already contains the major centres of the outbreak: including China, South Korea, Italy, UK, and USA. The data entered into the tool will be collected by a team of academics and students from the Blavatnik School of Government and other Oxford University departments.

The Government response tracker will be composed of 11 indicators, selected to measure the nature and extent of the government response in every country. The indicators include restrictions on domestic and international movement as well as school and public transport closures. The tool will also include economic measures such as the fiscal and monetary responses to the crisis. The data is quantified and uploaded to a publicly available dataset, downloadable from the publication’s webpage. The 11 indices will be combined to produce an aggregated indicator of ‘Government Response Stringency’.

The Government Response Stringency Index is intended to measure the severity of the government’s response to the crisis, rather than act as a signal of the appropriateness of any given level of government action.  Thomas Hale, Associate Professor of Global Public Policy at the Blavatnik School of Government and lead for this project, conceded: “Our index cannot, of course, tell the full story”.

Instead, Dr Hale claimed that the tool will have value in: “helping decision makers and public health professionals examine the robustness of government responses and provide a first step into understanding exactly what measures have been effective in certain contexts, and why.”

Researchers produced the tool amidst significant controversy regarding the different government responses to the Coronavirus crisis. Whilst many countries such as China, Italy, and some with comparatively few cases, like Singapore, have adopted strict responses to the epidemic; governments such as Brazil have drawn criticism for a relaxed response to the outbreak.

Given the unprecedented scale of the crisis in modern times, the lack of prior data poses a specific challenge for public policy researchers in exploring the relationship between policy responses and the development of the epidemic.

The Blavatnik school hopes that by condensing varied political responses into an easily interpretable index, they will make it easier for researchers to explore the link between severity of response and rates of infection.