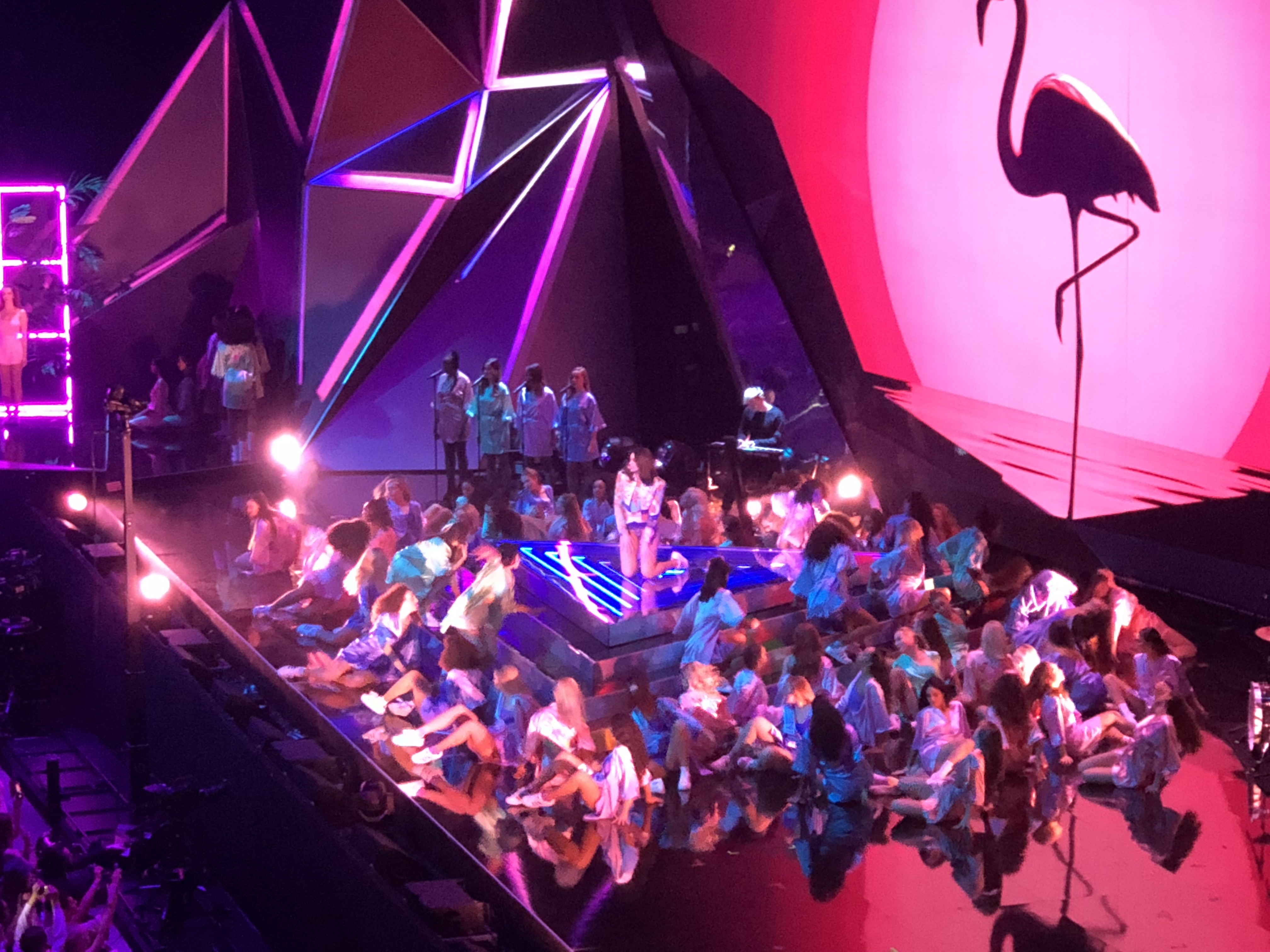 Image Description: Dua Lipa on-stage at one of her performances

Future Nostalgia is a clear attempt to break clean from tired pop stereotypes of recent years, replacing minimal electronics with full-bodied disco hooks.  Naturally, it has generated a lot of praise from reviewers, recognising the step up from the ubiquitous One Kiss, but there is something about it that doesn’t hit as hard as it seems to promise.

Despite Lipa’s obvious growth as an artist, much of the album sees her struggle to balance melody and production – almost as if this bolder sound leaves her unsure of how to articulate her vocals.

The opening title track starts with a weird hybrid of sing-talking that seems at odds with the jarring synths that growl beneath it.  Even in its chorus, something seems missing to make this the anthem that Lipa so clearly wants it to be.  We see gaps in melody lines, filled with “you know” or “come on” that never seem to quite fit in the song.  Elsewhere, the pairing of Lipa’s commanding voice with harsh synths also leaves the listener wanting more – the combination of Pretty Please’s sparse vocals with a lopsided bassline is nearly amazing, or the chorus of Cool that tries to pack a punch but just ends up sounding needlessly percussive when the melody is removed.

She manages to find a balance at other points, like in the slick and energetic synths that begin Cool, Lipa’s breathless vocals sparsely punctuating the track before seeming to join in, resulting in a build-up that is both exciting and knowing.  In Physical, she adopts 80s industrial synths to start the song that almost sounds like a cooler, updated version of The Cure.  This isn’t the only time that Dua Lipa shamelessly rips off other artists – the start of Levitating is near-identical to Taylor Swift’s You Need To Calm Down.  The draw here seems to be the eclectic mix of styles, the 70s disco string arrangements, 80s synth work, and 00s girl-power all making the title Future Nostalgia seem very apt.

This could go some way in explaining the hefty praise the album has garnered; Future Nostalgia is less monotonic than much of the charts, but still deeply danceable.

But while music is always contextualised, it seems that even given the current landscape, Lipa’s new album isn’t the ground breaker that its critical reception seems to suggest.

There are plenty of good moments, but overall the album leaves you waiting for Lipa to do more with them. For example, the lush strings that begin Love Again notably contrast to the rest of the album, but the mood they create is dispelled as soon as the track really kicks in, and they are later forgotten in favour of the disco strings that repeat throughout the album.

The album is racing and restless, never really stopping for breath, which makes it difficult to listen to in full. The heavy reliance on disco tropes becomes tired and monotonous and no slower songs feature to break up the mix. The album is firmly planted in the streaming era; each track is a hook-laden, 3-minute wonder, destined for a playlist called “chill pop” or “dance party”.  Yet it’s hard to find a song where the chorus doesn’t let us down, making the album seem a bit static despite its smart rhythms and seamless production.  Future Nostalgia seems to be making a point of being uncompromising and strong, utilising Lipa’s ferocious voice alongside groovy bass hooks.  But the strongest moment seems to be the moment where she stops trying so hard; album closer Boys Will Be Boys.  The smart and precise backing lets us hear what Lipa sings about, her smart lyricism at last given a chance to shine over the rest of the music.  It makes the rest of the album seem like overcompensation, its sparsity seeming infinitely stronger than the clichés and disco-pop tropes that make up the rest of the album.

Altogether Future Nostalgia leaves a strange impression; the listener is torn between willing Dua Lipa to make a bigger sound and waiting for space to absorb the torrent of sound.  There are some smart moments on here, and no end of stuff to keep you dancing, but take away the club atmosphere and the tracks seem somewhat lacking, despite their wealth of disco bling.

Haiming for the Stars