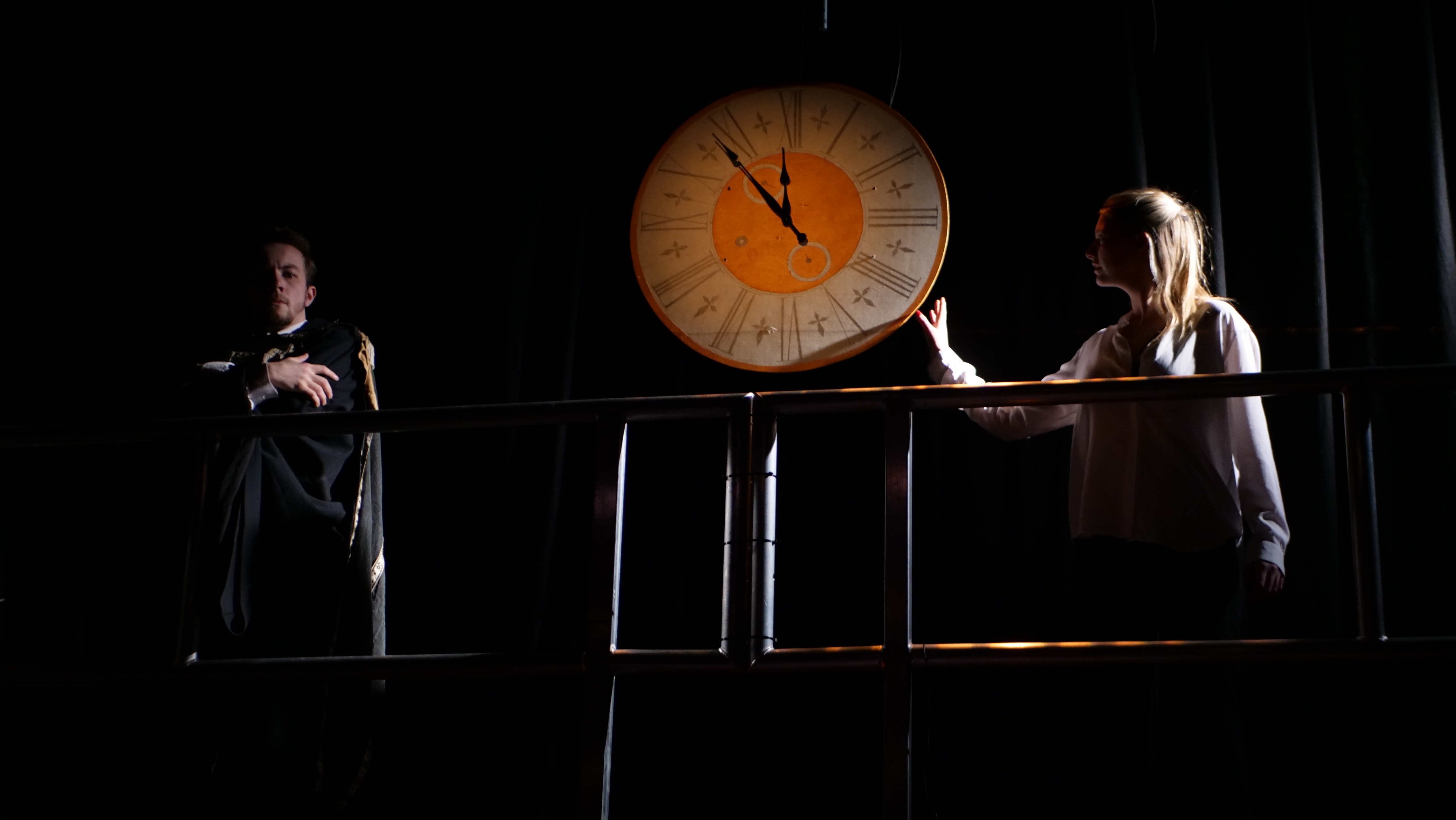 00Productions’ performance transports you into the electrifying world of Faustus

Image Description: A scene from the production featuring two actors either side of a clock face

Transported into a sixteenth-century erudite set consisting of eight old bookshelves, each tightly packed with ancient books of various sizes, a singular wooden desk with a matching chair, and a large blackboard detailed with complex equations and sketches, the audience follows the play’s titular character’s descent from an esteemed and learned scholar to the damned miscreant.

Overcome by the desire to pursue things greater than the intellectual and material limitations of mortal men, Doctor Faustus agrees to renounce his soul to Lucifer, in return for the total obedience of the demon Mephistophilis for the duration of twenty-four years. Faustus then proceeds to go on a journey filled both with light comedic exploits, as well as moments of deeply unnerving doubt and trepidation, which ultimately culminates in the once acclaimed German scholar’s moral downfall.

Henry Waddon’s portrayal of Doctor Faustus was electrifyingly engaging right from the very beginning – his depiction of his character’s indecision as he wrestles with his strong desire to transcend the barriers of the earthly realm, with the gripping fear that he feels at the same time, is rendered all the more convincing by his meticulous use of hand movements. Repeatedly running his hands across his face in an agitated and unnerving manner, the hand gesture became a crucial signposting of Faustus’s mental distress, acting as the perfect compliment to Waddon’s excellent oral delivery, and truly bringing to life the sense of lethal affliction that ultimately consumes his accursed character.

Repeatedly running his hands across his face in an agitated and unnerving manner, the hand gesture became a crucial signposting of Faustus’s mental distress

Likewise, Gemma Daubeney gives a fantastic portrayal of the demon Mephistophilis as a cunningly seductive accomplice to Doctor Faustus’s later adventures and misdemeanours. Sporting a bright crimson lip, matched perfectly by fingernails painted in an alluring red, our Mephistophilis entices Doctor Faustus with suggestive intonations when asking him“What shall you have me do?” as well as flirtatiously nudging his shoulder as she exits the stage. However, what was truly remarkably powerful about Daubeney’s performance was the malicious tranquility she embodied as Mephistophilis calmly trails across the stage, even appearing bored as she employs her tools of ingenious deception to invite Faustus to his own tragic demise.

Ruthless, but all the while charismatic, Daubeney’s performance flawlessly epitomises a more playful interpretation of the character of Mephistophilis, whose malevolence shines forth on delivery of the line at the very end of the play:

“Fools that will laugh on earth must weep in hell!”

A particularly vital aspect of the production which cannot go without comment is the chorus of demons, whose crooked and deformed bodily movements, combined with their deeply disturbing chants and cackles, created the perfect backdrop to Dr Faustus’s moral descent. I found Abi Watkinson’s demon particularly impressive and troubling, especially with her ominous and foreshadowing delivery of the line “But Faustus never shall repent!” as her demon’s twisted figure contorts off stage, followed by the raucous and maniacal laughter of her fellow demons. The scene in which we are presented with the seven deadly sins, encapsulated in the form of seven demons was also especially notable.

Callum Coghlan’s portrayal of Envy was exceptionally marking, both thanks to his physical representation of the sin as a pathetically weak, small and flailing figure, as well as the comedic aspect to his performance when he frantically opens a book and stares at the open pages for a few moments of silence before revealing in a tone of pitiful rage that he cannot, in fact, read.

Finally, a brilliant touch to the entire production can be found in what the cast themselves have denoted as their 15th member – a large clock which sits atop the steel platform and looms over the entire stage; a pre-warning for the fact that Doctor Faustus is quickly running out of time.

A large clock which sits atop the steel platform and looms over the entire stage; a pre-warning for the fact that Doctor Faustus is quickly running out of time

The gold-rimmed clock on which is painted grey Roman numerals on a white background, faintly reminiscent of a sundial clock, features as an indispensable addition to the creation of a frantic and anxiety-ridden atmosphere – the clock’s spinning hands, accompanied by the perfectly timed audial effects of fast-paced, sped up ticking and persistent chiming mirrored impeccably the tense mood created onstage by the interaction between Faustus and the demons.

The production could not have been so powerful without the dedicated and hard work of Alice Penrose and Andrew Or, as Set Designer and Sound Designer respectively, with regards to the magnificent clock (which I have since discovered is called Gordon!)

Overall, Director Amelia Rogers and Producer Olivia Wheeler’s production of Doctor Faustus was a thoroughly enjoyable watch, showcasing both the extraordinary talent of the actors involved as well as that of the entire crew behind the scenes. It is perhaps ironic that for a play whose entire premise revolves around the frustrations and limitations of mortal human capacity, the magnificent depth, adroitness and intricacy of its production proves precisely the opposite!