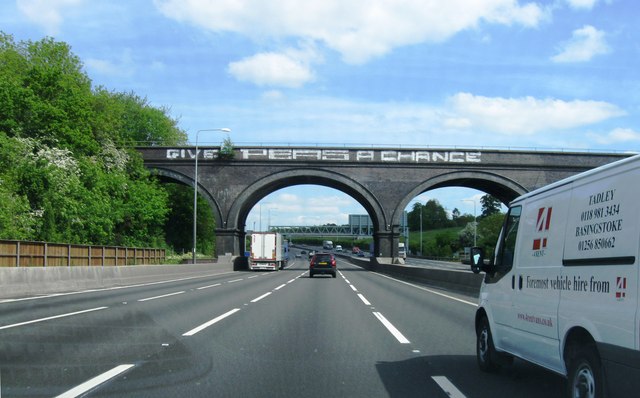 For some, it might be a slightly unorthodox way of recognising the NHS and fighting back against the social disruption which has descended upon the country. But the graffiti message on an M25 bridge close to my motorway exit reading “Thank you NHS” is a big deal for those who know what it is.

It all starts with the original message “GIVE PEAS A CHANCE” which first appeared a long time ago on the Network Rail bridge and became a staple of the local community. I cannot begin to put into words just how much of a cultural icon this was – but one indication might be its appearance in the BBC’s “The landmarks that mean you’re nearly home” alongside, for example, the Angel of the North. Reading that artwork everyday as I came home made it a part of my life. During Jesus College’s ‘hometown hero/end of an era’ themed bop, I came as Give Peas a Chance.

In 2018, a heinous act pulled the community together: the “treasured” original graffiti was replaced with “HELCH” by an unknown graffiti artist. The response, quite frankly, was astounding. People were devastated and a Facebook group was formed to celebrate the original graffiti – now followed by almost 10,000 people, alongside a petition to reinstate “GIVE PEAS A CHANCE” (which has over 7,000 signatures). The vast number of comments and tags mourning this loss is a true testament to its popularity.

However, like all good stories, this one has a happy ending. Recently, “HELCH” was replaced with “Thank you NHS”, a message everyone can agree with and was celebrated by the Facebook group’s founder as “the greatest thing to happen to the bridge since it was messed with by Helch over 18 months ago.” With the NHS working long hours and putting themselves at risk on the front line to save thousands of lives, there could be no better tribute to everything they’re doing for us. I hope that this small token of our appreciation warms the hearts of NHS workers who drive past this sign everyday on their way to work to save our lives.