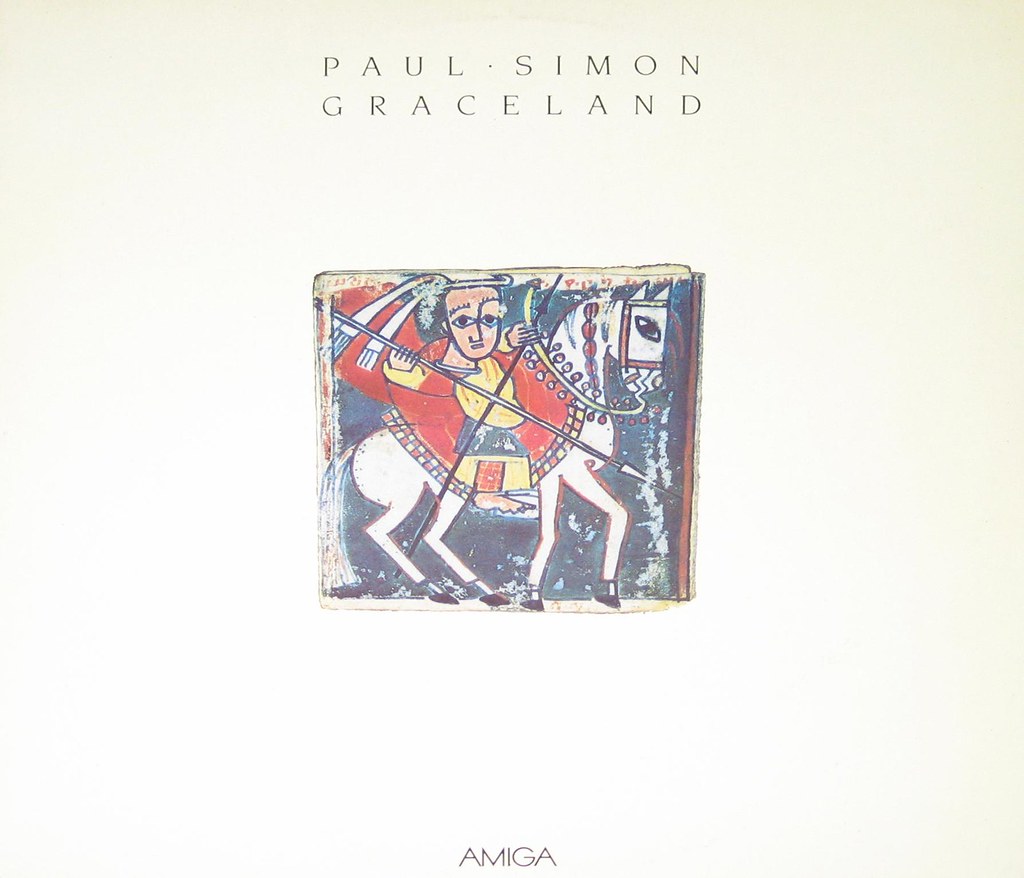 I confess I am a person liable to decide after a single listen that I have found my new favourite-ever song. But believe me when I say that Paul Simon’s 1986 masterpiece Graceland (an album recorded after Simon became intrigued by a bootleg cassette and ended up travelling to Johannesburg to record with South African musicians, in the process drawing—in my view undeserved—cultural flak for visiting a nation still riven by apartheid) is a truly perennial favourite, and has grown to occupy a unique place in my life. Through it, I want to offer a perspective on the miraculous capacity that music has to offer a genuine sense of solace and companionship through time.

I probably first engaged with the album at the age of thirteen or fourteen — I think my mum had an original vinyl copy stashed away somewhere, which I came across. Probably the initial appeal came from the album’s aural richness; culturally it is a real jumble, mixing Louisiana zydeco with Zulu-derived South African styles like isicathamiya and mbaqanga—as well as Paul’s own musical and lyrical roots, in the Western popular tradition. This collaborative spirit is something reflected upon and celebrated by the artist himself.

The title track is “a very good example of how collaboration works,” Simon later remarked, “even when you’re not aware of it occurring”. Simon used the song to combine a ’50s Sun Records-style country drumbeat with the country-inspired chord progression of South African guitarist Ray Phiri, over bassist Bakithi Kumalo’s “straight-ahead […] African groove”; “the two musics find a commonality, and the lyric expresses that. […] That’s really the secret of world music—people are able to listen to each other and make associations, and play their own music that sounds like it fits into another culture.”

When I return to the album now, it plays the part of an old and trusted friend—after six or seven years I can anticipate every lyric, every ebb and flow in the guitar parts, every bass fill and sonic embellishment

Yet perhaps the greater part of my attraction to Graceland as a work of art is derived from Paul Simon’s virtuosic lyricism—at once vividly poetic, and prosaically matter-of-fact. A continuous thread through the album’s lyrical content seems to be a disillusioned perspective on unrequited love, and on life’s imperfection more generally, coupled occasionally with a joyous acceptance of the beauty of the experience. It must be said that this lyrical power is inseparable from Simon’s vocal delivery, sometimes impassioned, sometimes forlorn, sometimes lapsing into a spoken, conversational tone.

With this in mind, I’m not sure I could cite any song to rival ‘Gumboots’ for direct, visceral imagery: “It was in the early morning hours when I fell into a phone call / Believing I had supernatural powers I slammed into a brick wall / I said, ‘Hey, is this my problem, is this my fault? / If that’s the way it’s gonna be, I’m gonna call the whole thing to a halt.” Nor do any other lyrics possess quite the same emotional weight to me as these rueful and enigmatic lines from the title track: “She comes back to tell me she’s gone / As if I didn’t know that / As if I didn’t know my own bed / As if I’d never noticed / The way she brushed her hair from her forehead.”

It must be said that this lyrical power is inseparable from Simon’s vocal delivery, sometimes impassioned, sometimes forlorn, sometimes lapsing into a spoken, conversational tone

And I would say that this emotional vulnerability, this lyrical depth and poignancy, is the core of the album’s companionate value to me. “There is a girl in New York City / Who calls herself the human trampoline / And sometimes when I’m falling, flying / Tumbling in turmoil I say / ‘Whoa, so this is what she means’”, Simon observes meekly in ‘Graceland’. And in the aurally gorgeous ‘Diamonds On The Soles Of Her Shoes’, the artist’s heart-rending image of two New York lovers is somehow both tragic and glorious: “And she said, ‘Honey take me dancing!’ / But they ended up by sleeping in a doorway / By the bodegas and the lights on Upper Broadway / Wearing diamonds on the soles of their shoes.”

These moments within songs, these passing fragments of emotion and expression, combining a rich sonic landscape with vivid poetic imagery, and Simon’s own fragile yet endlessly expressive voice; these moments have a familiar and reassuring touch. Somehow they remind me I’m not alone in tackling all the pain, all the chaotic vicissitudes of life; and this effect has only been heightened over time. When I return to the album now, it plays the part of an old and trusted friend—after six or seven years I can anticipate every lyric, every ebb and flow in the guitar parts, every bass fill and sonic embellishment. And this faithful companion makes the day a little more bearable each time.