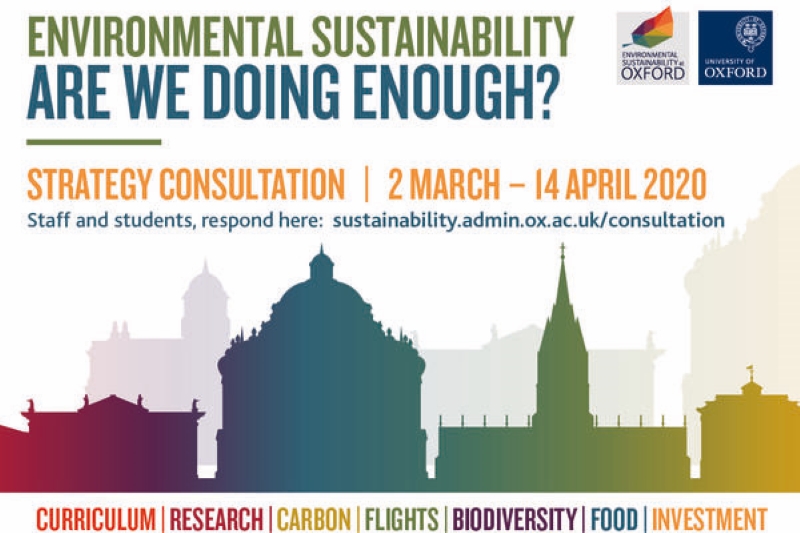 A university-wide Environmental Sustainability Strategy has been put to a consultation. The consultation is in the form of a survey, available to all members of staff, academics and students, that closes soon on the 14th of April.

The strategy, outlined within the survey, contains a number of proposals intended to aid the university in reducing its carbon footprint. The strategy contains 13 ‘priorities’, ranging from the reduction of meat consumption and emission reducing infrastructure projects.

There are also new proposals, such as giving all students, regardless of course, the chance to take options on sustainability as part of their degree. Also included, is a commitment to divestment from investment funds whose activities are primarily focused on funding new oil and gas extraction, and ban holding direct equity in these companies. The extent to which these measures extend to college owned assets has not yet been outlined.

Whilst it is stressed that it is not yet a ‘plan of action’, it is hoped that the survey will generate interest in the University’s strategy to combat climate change.

Kaya Axelsson, SU VP for Charities and Communities told The Oxford Student: “The strategy was developed in response to advocacy from students and wider societal pressure for the university to act to mitigate the climate crisis. But no one will feel the impacts of that crisis more than the students who will inherit it.

“This survey is a chance for them to say whether what is being proposed will go far enough, or if we have missed something. What is shared by students in this consultation will be considered as part of the final set of new policies that the university announces in the next academic year on how it plans to up its ambition in responding to the climate and nature crisis through our operations, our curriculum and research and our political and financial partnerships.”

The university was found to be the largest source of Oxford’s emissions, in the council’s Climate Emergency Strategy Support report, released in September 2019. Data collected as part of the Times Higher Education University Impact Rankings, places Oxford outside of the top 100 universities in the world for climate action.

The strategy comes in an academic year that has seen multiple student-led campaigns to force the University to commit to divestment amongst other measures. These include the  Climate action week and the Direct Action for Divestment’s occupation of the St John’s college front quad.