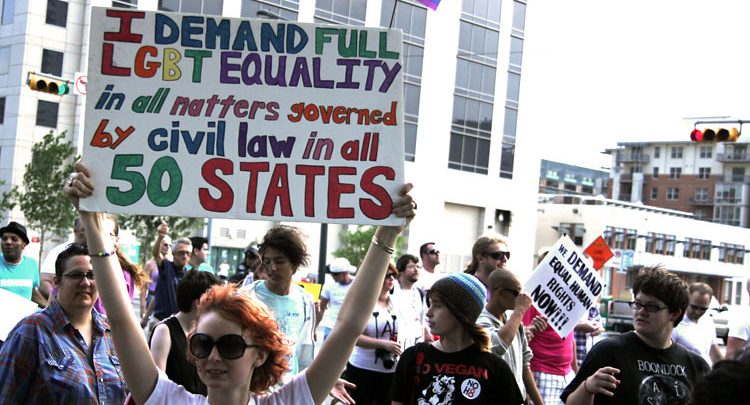 Image description: an activist holding an LGBT rights placard at a rally in the US

In February, Pete Buttigieg became the first openly gay man to win a delegate at a US presidential caucus, with the former mayor for South Bend, Indiana polling ahead of Senator Bernie Sanders by two percent. It seems a simple assumption that the ‘gay vote’ was a driving force behind Buttigieg’s success, but this is not quite the reality. It was difficult for many – even most – queer Americans to see themselves reflected in this candidate. His sexuality aside, he was a fairly conventional, conservative Democratic candidate. His policies were largely bland and inoffensive, and as a white middle-class man, he was not exactly out of kilter with traditional ideas about the kind of person a president should be.

Queer women, trans people and voters of colour were likely not drawn in at all by the prospect of a cis gay man for president. Meanwhile, many white gay men felt that he was still too attached to the functions of state that made Buttigieg the most acceptable version of a gay man possible, proposing nothing helpful or new. Some of his heterosexual adherents may even have derived a little moral satisfaction in backing the first openly gay would-be president, regardless of whether or not he really represented the needs and struggles of queer Americans.

There is still a ‘right’ way to be a politician, and a ‘political’ way to be queer

Buttigieg would not have been the first openly gay head of state. Luxembourg and Ireland both have men married to men as their leaders; Serbia has a lesbian. The UK has a number of openly LGBTQ+ MPs, including Oxford’s own Layla Moran, who came out as pansexual early this year. This does not mean that parliamentary culture is particularly warm to the idea of an increasingly queer House. We might imagine that some members perceive out-ness as an infiltration of millennial identity politics into ‘proper’ public life. “Parliament is a weird, backwards place”, Moran told PinkNews: “I don’t know if there’s any [other MPs] who would identify as pansexual, and not that many who identify as bisexual – there are a few women who are brilliant role models who have come out in their lesbian relationships.” There is still a ‘right’ way to be a politician, and a ‘political’ way to be queer. Buttigieg undoubtedly leaned towards the former in his self-presentation.

This isn’t a criticism – many of us are used to playing straight as an act of self-preservation; politicians are people like the rest of us, and for them too it is not always safe to be ‘loud and proud’ in their home communities. However, simply having an out politician to speak for our communities is not enough for us to feel truly reflected in the important forums of the state.

Some might feel that with the issue of gay marriage settled in the UK by 2014, there is little left for politicians to do when it comes to LGBTQ+ rights, and that maybe a politician’s sexuality or gender identity is not even worth mentioning. In reality though, queer reputation remains just as important – especially for trans people, who still in 2020 are having to fight for basic legal respect and amenities. We need queer politicians to make sure that our rights are respected, but it is also important for young queer people with big aspirations to see people like them succeed.

Although Buttigieg has dropped out of the race, he has been an example of how queer-ness can be acceptable to moderate conservative voters in the US. Now, it is important to make sure that other kinds of queer-ness become increasingly accepted as legitimate in the realm of politics.