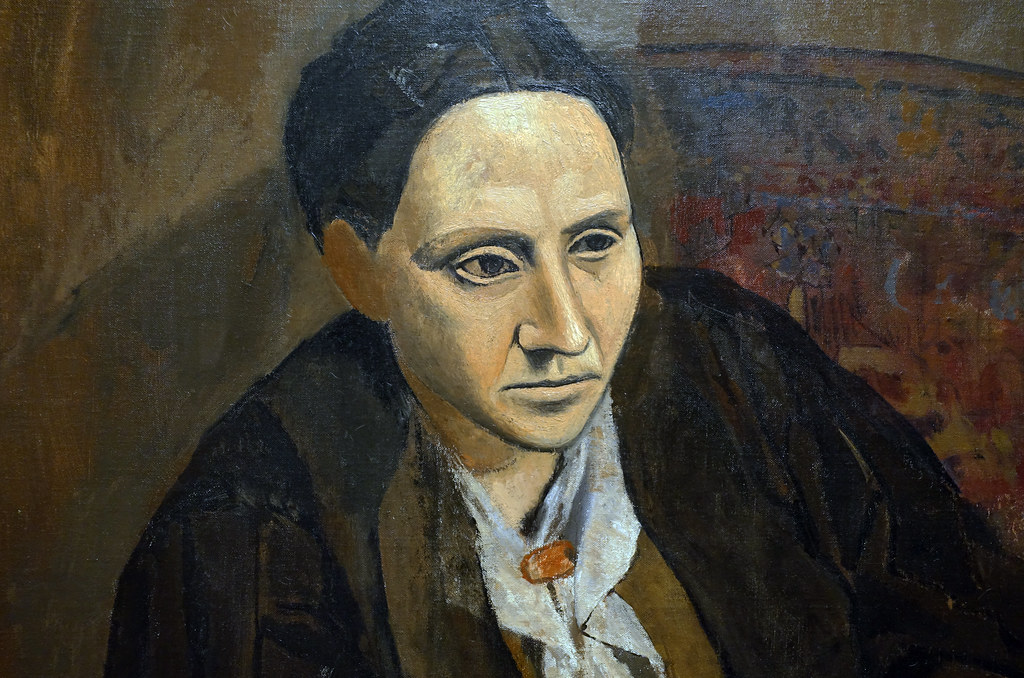 Gertrude Stein, the mother of modernism

Right now it’s hard to imagine Pablo Picasso, Ernest Hemingway, F. Scott Fitzgerald, James Joyce and Henri Matisse sitting in a room together, yet this was a common occurrence at 27 rue de Fleurus, Paris, in the 1920s and 1930s. They were united by Gertrude Stein, whose weekly salon was the birthplace of ideas that would help define modernism in literature and art. Although Stein played a pivotal role in the lives of several now world-famous artists and was a ground-breaking author in her own right, many are unaware of this formidable woman who shaped the course of modern culture.

Born in 1874, in Pittsburgh, and raised in Oakland California, Stein relocated to Paris in 1903 with her brother Leo and made France her home for the remainder of her life. The joint art collection of Gertrude and Leo Stein began in 1904 and would go on to become one of the most important collections of modern art in the world. Before long, the walls of their home at rue de Fleurus were lined from floor to ceiling with now-famous paintings by Cézanne, Picasso, Matisse, Gauguin and Renoir.

The foresight of the Stein siblings meant that they recognised the genius of figures such as Picasso while they were still nobodies, scoffed at by most of the world. In the early 20th century, hundreds of visitors flocked to their studio to view the paintings. Many were disgusted by what they saw, but others went away converted and inspired. “For all intents and purposes, Leo and Gertrude Stein had inaugurated, at 27 rue de Fleurus, the first museum of modern art” (James R. Mellow,The New York Times).

Entrance into the Stein salon soon became a sought-after validation

The sheer number of people desperate to gain entrance to the Stein household soon became a nuisance, and Saturday evenings were set aside for formal gatherings so that Stein could work at her writing undisturbed by impromptu visitors. Each week, the brightest emerging talents of the world of modern art and literature would gather in the sitting room, whether drawn by Gertrude and Leo Stein’s innovative ideas or the famous homemade cakes of Alice B. Toklas (Gertrude’s partner and life companion, who would later publish a celebrated cookbook). Entrance into the Stein salon soon became a sought-after validation.

Not only was Stein truly modern in her ideas and her writing, but she was also ahead of her time in her personal life. She didn’t allow the prejudices against women in the early 1900s to hold her back, declaring herself a ‘genius’ and commanding the respect of the men who attended her salons. Despite receiving much criticism and ridicule from the press, her writing remained radical and uncompromising. Hemingway and Fitzgerald both submitted their writing to her formidable scrutiny and would ask for her advice on literary matters, recognising her intellectual and creative prowess. “Gertrude was always right”, Hemingway admitted to his friend John Peale Bishop in 1922.

As for Picasso, Stein’s early patronage and friendship were critical to his success. She bought his paintings at a time when almost no one else was paying attention to this unconventional young artist. In her documentary film and book Paris Was A Woman, Andrea Weiss suggests that had Stein not started collecting Picasso’s work in those early years, Picasso may have remained a struggling artist, one of many uncelebrated painters forced to barter their art to pay their way in Paris at that time. Although we cannot say for sure whether or not this is true, it is clear that without Stein, Picasso’s story would have been very different. By way of acknowledgement, he painted a portrait of her between 1905 and 1906, prompting Stein to write a prose portrait in return. Today, Picasso’s depiction of Stein remains one of the most famous portraits that he ever painted.

Her early patronage and mentorship of artists that are now world-renowned shaped the course of modern culture, while her own writing challenged all literary conventions

Stein was a woman writer who wrote about women with humour and intelligence. She was also openly gay and wrote what have been identified as some of the first ‘coming out’ stories in literary history. At a time of homophobia and closeted homosexuality, Stein became a mass-market celebrity despite her public status as a gay woman. She and her partner of 39 years, Alice B. Toklas, declared themselves ‘married’ and remained together until Stein’s death in 1946. Their relationship is now seen as one of literature’s greatest loves.

This gay, Jewish woman writer was fiercely and unapologetically herself

This gay, Jewish woman writer was fiercely and unapologetically herself. Her early patronage and mentorship of artists that are now world-renowned shaped the course of modern culture, while her own writing challenged all literary conventions. She deserves recognition for her instrumental role in the story of 20th-century art and literature; it is unsurprising that she is known to many as the Mother of Modernism.