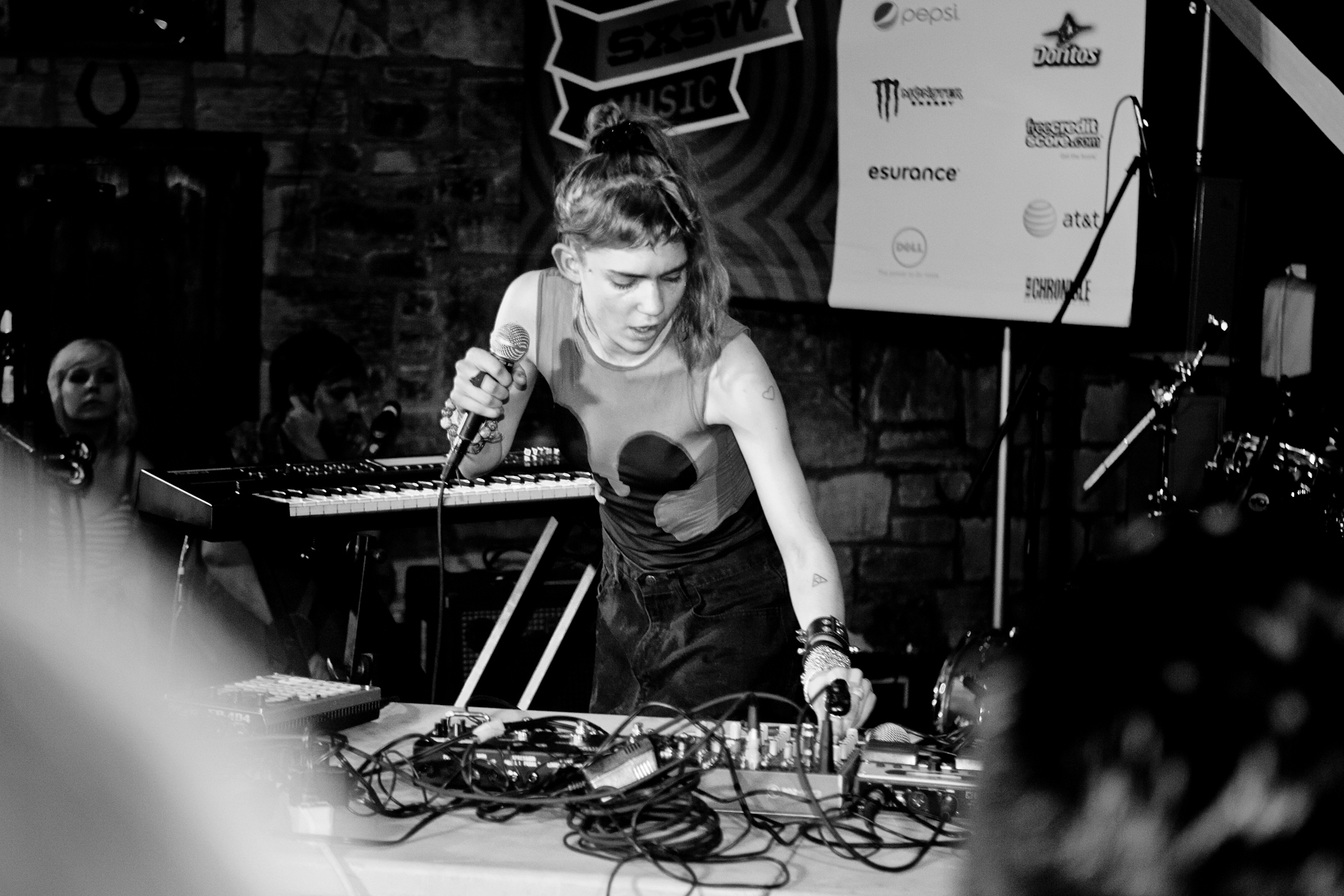 You may have forgotten, but Grimes makes music. Now, a lot of her fans, myself included, have taken to viewing her recent affiliations with a side-eye. Contrary to what you find in the media, ever since her appearance at the 2018 Met Gala Grimes is more than just the eccentric girlfriend and child-bearer of tech billionaire Elon Musk. She is actually, still, a fantastic music producer and artist in her own right, and her new album Miss Anthropocene is further proof of that.

Vancouver-born Claire Boucher, aka Grimes, released her much delayed and highly anticipated fifth album in February this year, which has proved to be well worth the wait. Miss Anthropocene had been in the works since late 2017, but after disagreements with her record label, 4AD, it wasn’t released until this February.

In an Instagram post revealing the album title, Grimes said that it was based on the concept of an “anthropomorphic goddess of climate change”. The album’s darkness indicates the wrath such a goddess would be feeling towards humanity’s maltreatment of her planet.

Although the entire album is well worth praise, the A-side stands out with the most energetic songs of the record. She starts off with ‘So Heavy I Fell Through the Earth’ and the song rolls on with a slow driving beat that evokes the anxiety of a coming storm. Grimes’ high pitched, reverberating vocals add to the track not through lyrical substance, but through chants and wails that layer the methodical drumbeat with ethereality.

Grimes’ high pitched, reverberating vocals add to the track not through lyrical substance, but through chants and wails that layer the methodical drumbeat with ethereality

Following this, the second track ‘Darkseid’ is another collaboration with Taiwanese rapper Aristophanes (Pan Wei-Ju). Their first partnership was on Grimes’ previous album Art Angels for the track ‘SCREAM’. Filled with echoing claps, surges and Aristophanes’ fast-paced Mandarin verses, ‘Darkseid’ is the first truly gloomy track of the record.

‘Delete Forever’ continues this brooding theme across genre lines. In this acoustic track, Grimes’ natural voice is heard at a more human pitch, replacing her usual high tones and heavily filtered vocals. It is one of her few tracks where the lyrics are decipherable on the first listen, and the story they tell is one of regret, loss and references to opioid abuse.

In an interview with NME magazine, Grimes explains how the numbness she felt when losing six of her friends to heroin overdoses is expressed through the track. The song was even written on the night of Soundcloud rapper Lil Peep’s death from a fentanyl-laced Xanax pill.

Yet, the true gem of the album is the last song on the A-side. ‘4 ÆM’ is a thumping drum and bass rollercoaster sampling the Hindi romance film Bajirao Mastani. In this Indian classic, the titular Mastani and an all-girl dance troop perform an enticing musical routine for the Maratha Peshwa (prime minister) Bajirao. It is their rhythmic chant that Grime’s samples and combines with a quintessential bassline not heard in popular music since the 2000s.

The track is a mash-up of a headbanging BPM alongside exotic and mysterious breaks. Grimes’ is on top form with her signature high pitched, and lingering vocals. The entire feel of the track is reminiscent of such classics as Pendulum’s ‘Girl in the Fire’.

Miss Anthropocene’s B side doesn’t lose any momentum. ‘My Name is Dark’, originally titled ‘That’s what the Drugs are For’ but renamed on orders from her label, is a nu-metal inspired anthem. Grimes told Genius that her original title is the track’s “true title” and she resents being told that she had to change it. The track is reverb-heavy and the lyrics express a theme that runs throughout the entire album “truly not giving a …”.

Grimes’ portrayal in music press has been mixed for the past decade and she has spoken at length on how she finds the constant attention and misinterpretation highly stressful. She has deleted large swathes of social media posts numerous times, and in 2018 legally changed her name to c, as in the speed of light in Einstein’s famous equation E = mc2 – all hallmarks of a celebrity constantly battling with a self-image under scrutiny.

This, culminated with the media storm surrounding her relationship with controversial tech icon Elon Musk and, less than two years later, the reveal that she was pregnant with their child. She felt like a villain in the eyes of the public but was adamant on still making “sick-ass” music, so she harnessed the evil persona she had been given and channelled the fury of mother earth.

In a somewhat erratic interview she gave in March 2019, she informed the Wall Street Journal that she aimed to “make climate change fun” or at least “make a reason to look at it”. Needless to say, many found this to be a tactless foot-in-mouth moment for Grimes, but Miss Anthropocene is a useful tool for those of us looking to divorce the art from the artist.

In fairness to her, it’s been a long journey from her roots getting stranded with her chickens on her houseboat somewhere halfway up the Mississippi river, as the Star Tribune reported in 2009. One can’t help but see themself poorly miscommunicating on a hot button issue when they listen to Grimes’ desire to “make climate change fun”.

Miss Anthropocene is a dark and stormy ride through the mind of a misunderstood genius. Grimes expresses her frustration with the media and humanity through the persona of a cyberpunk, Gaia goddess. Full credit goes to her, she continues to produce virtually all of her own music, a testament to the fact that Grimes requires praise and recognition as an exceptionally talented artist first and foremost, Musk or no Musk.