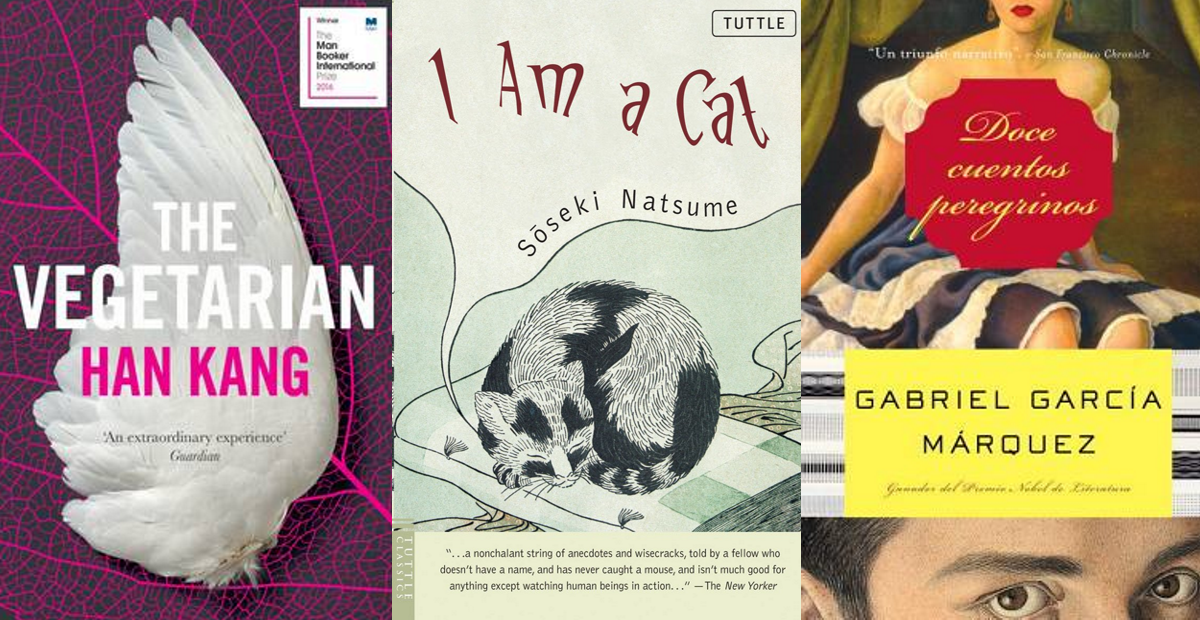 Around the world in 8 books

Whilst most of the world is in lockdown, literature is still free to comfort, entertain and let you explore different cultures. Here are my favourite books from around the world, to be read whilst our world is a little further away from us.

An underrated book of twelve short stories about the lives of Latin Americans in Europe, these stories centre around dislocation and each have a sense of isolation and strangeness, perfect for these times.

Stories vary, from a woman whose car breaks down searching for a place to use the phone, love at first sight at Charles de Gaulle Airport, to a family seeking shelter from a paranormal Catalan wind.

These gripping stories which are each comprised of a few pages are perhaps not for those wanting a great escape, but some are disturbing enough to keep you distracted.

I am a Cat by Natsume Sōseki (originally in Japanese)

This Japanese novel is about a nameless cat who comments on the folly of its owner and other neighbouring humans. You will frequently find yourself laughing with (and at) this snarky feline narrator.

The book is anecdotal in style, making it easy to read, but it is still not an ‘easy read’ as this little cat has lots of philosophical thoughts on the human experience (not even the grand themes of our existence, but our daily life).

Equally, its satire on the Japanese upper middle class makes it an overall thoughtful and funny read.

The Vegetarian by Han Kang (originally in Korean)

Set in modern-day Seoul, this book tells the story of Yeong-hye, a married woman who decides to stop eating meat after a series of nightmares involving animal slaughter, and the family fall-out that ensues.

The title deceives, as it speaks little of the vegetarian diet or philosophy and focuses much more on the themes of shame, empathy and desire. Its harsh depiction of a family fall-out may not be the needed relief for those stuck too long with their family.

Still, I found it a disturbing but meaningful read, interestingly organised into three parts with different narrators including Yeong-hye’s husband and sister.

Another short story collection, this time from the Czech/French writer Milan Kundera. Laughable Loves presents seven humorous short stories about seduction in one way or another.

Most have a tragicomic element, and all have great dark humour. Stories range from a young professor who loves mind games to a young man with a religious girlfriend who himself is not allowed to engage with religion. If you ignore some questionable depictions of women, it is an entertaining read.

The Meursault Investigation by Kamel Daoud (originally in French)

The Algerian writer takes on Camus’ The Stranger in The Meursault Investigation, narrated by the brother Harun of the nameless Arab “Musa”, who in Camus’ text is shot by Meursault who is blinded either by the sun or by the meaninglessness of life.

It has luminous writing unlike the purposeful staleness of Camus’ novel. There are similar existential preoccupations, but it is largely about Algeria, the effects of French colonization, the war of independence and the impact of religion, all discussed in this unique retelling.

Selection of Short Stories by Anton Chekhov (originally in Russian)

I read this collection of short stories on various rides to school – perfect to dip into, Chekhov writes scenes of 19th-century Russian life that feel modern in theme.

The short story format makes his realist devices much more manageable, every detail feels necessary yet light and with a lack of complex plots and a lovely disregard for neat beginnings and endings. These charming stories are a great read for this period as they are sombre but never despairing. Some favourites of mine include ‘Gooseberries’, ‘About Love’ and ‘Champagne’.

Through poetic prose, Calvino’s Marco Polo after returning from his travels describes the cities he has visited to the emperor Kublai Khan. With a strict structure it manages to feel light and dreamlike. In less than 200 pages, this book talks about life, human nature, time, fate, memory and civilisation, and is an effective escape from day-to-day life.

Coming of age and history picture book all in one, this graphic memoir tells the story of Marjane growing up in Tehran where she lived through the Shah’s regime, the Islamic revolution and the war with Iraq. Never has learning about history been so interesting as through the eyes of this outspoken and wise child. Her intimate portrayal of family and her experiences all beautifully designed in black and white makes this one to draw to the top of the to-be-read pile.