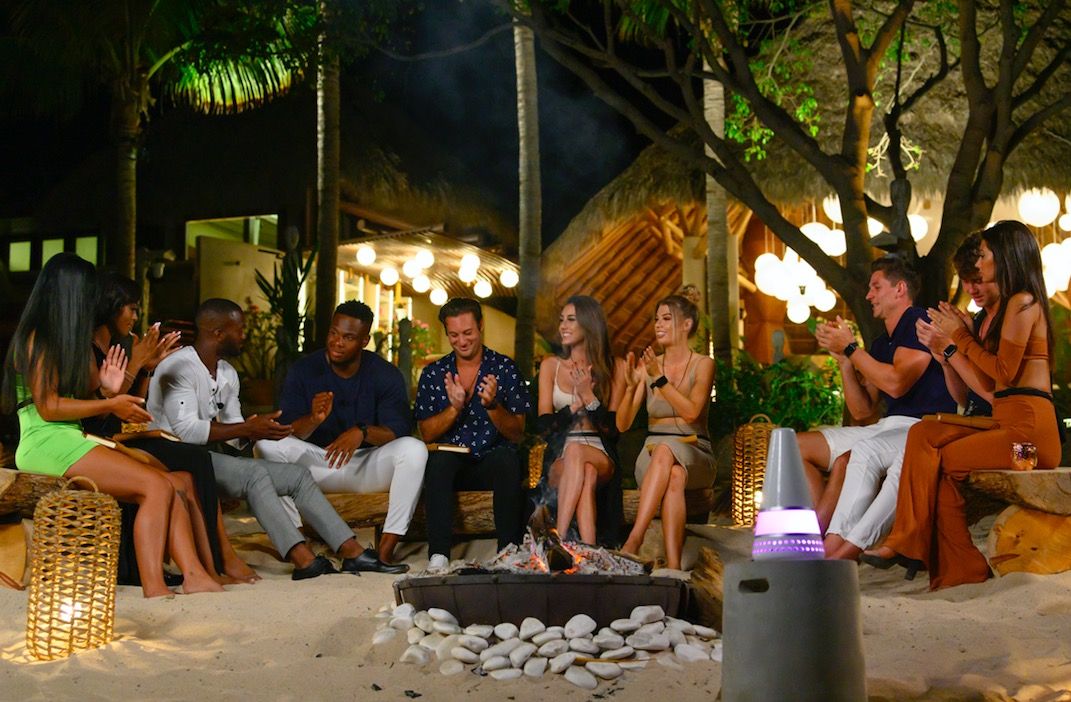 Image Description: Contestants gather together in a moment from the series

Lockdown is really getting to me. A few days ago a new show popped up on my Netflix recommendations and, like a fool, I decided that a new reality programme where some oiled-up Instagram wannabes are banned from having sex with each other sounded like fun escapist viewing. With hindsight, this was a bad decision. So bad, in fact, that this review is partly to offer some worth to the 7 hours of my life I will not get back.

I am still struggling with the idea that Netflix actually made and aired this show. If you thought Love is Blind was a wild ride of utter insanity, you are not ready for Too Hot to Handle. This is a fever-dream disguised as a reality TV show:  it is poorly made, it fails to address any of the many problems that Love Island has despite looking like a shot-for-shot remake, and the cast is so appalling that it almost feels set up. I am still not entirely convinced that this isn’t some elaborate Netflix satire to hold a mirror up to our ever more unhealthy obsession with reality television. This show is so utterly banal it doesn’t even warrant being compared to a Black Mirror episode; it feels like a show the characters in a Black Mirror episode would be watching to show how far society has fallen (or something). Added to its general dystopian flair is an ‘AI host-bot’:  Signor from Years and Years – sorry, ‘Lana’ – who is in-part Big Brother part sentient Siri, watching over them with a celibacy abacus, slicing off ever-larger chunks of the prize money every time one of Instagram’s best decides to get it on.

The premise … was to take a TV-friendly group of hot people seemingly incapable of forming strong relationships without ripping each other’s clothes off and force them to focus more on communication, self-love and opening up

Too Hot To Handle attempts to grapple with some of the more delicate issues in building relationships that other reality shows have failed to address. I imagine the premise that was pitched to the Netflix executives before they downed a bottle of Tequila and said yes, was to take a TV-friendly group of hot people seemingly incapable of forming strong relationships without ripping each other’s clothes off and force them to focus more on communication, self-love and opening up. However, the show deals with these topics with all the grace and delicacy of Donald Trump trying to finish a sentence. ‘Heavy-handed’ is too light a descriptor. The editing makes it feel like every time two of the oiled-up contestants fight, all it takes is a lesson in bondage or to ‘stare deeply into another’s eyes’ (it was at this point I started losing it with this show), and suddenly all is right again.

However, the show deals with these topics with all the grace and delicacy of Donald Trump trying to finish a sentence. ‘Heavy handed’ is too light a descriptor.

There are some likeable characters – Rhonda and Sharron from the US and Kelz from London seem genuinely sweet, and David is the charming knock-off Dr Alex – but lots of this cast, particularly the men, are textbook examples of toxicity. The casting directors have excelled themselves in managing to find the very worst representations of each community, from walking manifestation of toxic masculinity Harry to ‘my god is that what Floridians are really like’ Haley. This is obviously done to enhance the entertainment value and of course, all these characters are entertaining in their sheer ludicrousness, but you have to ask how many times the ‘super-hot ditsy Instagram stars get raunchy in luxury villa’ cliché is going to be exploited.

There is a darker side to Too Hot to Handle that suggests a woeful insensitivity to the ‘be kinder’ narrative permeating through tabloids and reality shows since the death of Caroline Flack. It makes some very clumsy attempts to engage with ‘personal growth’ and ‘developments’ but in the end, offers nothing different or original to this tired genre. It attempts to present a ‘thrilling twist’ at the end, placing the ‘financial future’ of the group in the hands of stereotype machines Harry and Francesca, essentially undercutting all of the previous ‘odds’ of avoiding sexual contact.

All of this aside, the show also flits between being dull to being difficult to follow – the timeline is almost impossible to keep track of. The end of each day is not clear, Lana del Narrator only seems to pipe up every 3-4 days, and when references are made to ‘it’s been three weeks!’, the viewer is left confused as to where that time is meant to have gone. It is constructed around its 8 episode format, rather than any actual continuity, which doesn’t allow any appreciation of if, or how, development has occurred. The ‘you are all winners’ “plot twist” at the end is no twist at all because the terms of victory are so confused at the start.

The finale is somewhat better than the rest of the show, hammering home the themes of ‘meaningful connections’ and self-worth with a little more tact: but it is very clear throughout that this is not a genre-changing or even genre-defining show. It is an unoriginal attempt to fall into the ‘so bad it’s good’ category of reality TV, while also trying to prove it can be different, which leads to a very confusing result.

It is an unoriginal attempt to fall into the ‘so bad it’s good’ category of reality TV, while also trying to prove it can be different, which leads to a very confused result

‘Too Hot to Handle’ is clearly a different show to the one pitched. However, the whole thing is not ‘so bad it’s good’, but so bad it makes you want to break lockdown, find the Netflix producers responsible and yell: WHAT MADE YOU THINK THIS WAS A GOOD IDEA?