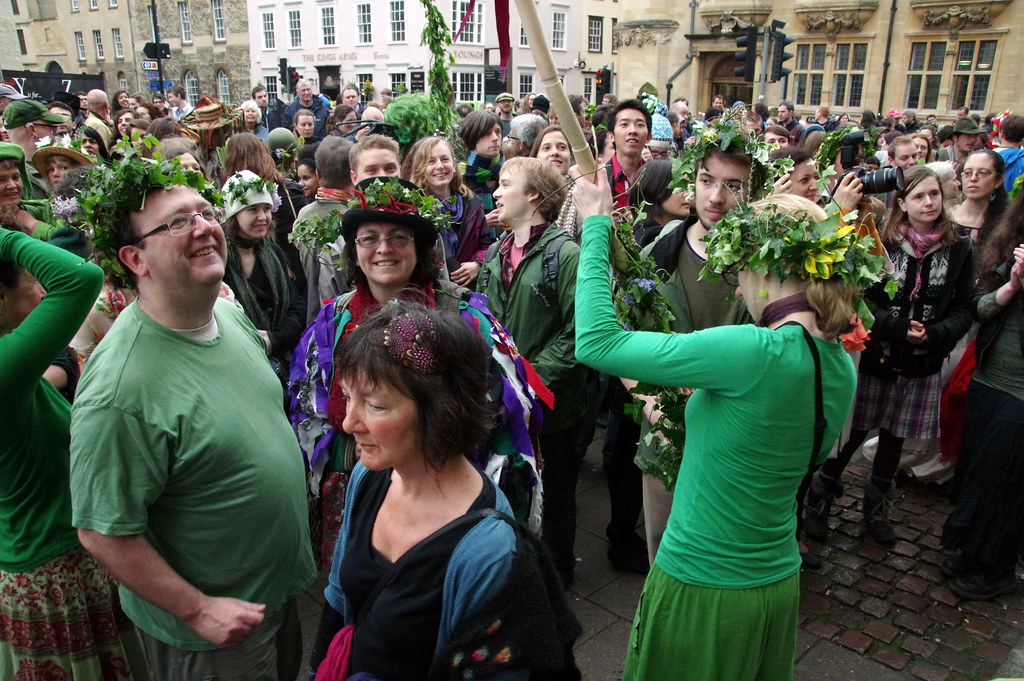 Oxford May Day: full steam ahead!

Image Description: May Morning celebrated by revellers costumed in leaves and greenery

Oxford’s May Morning is a tradition which has contributed to the unique mythology and mysticism surrounding Oxford. The ancient festival of spring has been celebrated on 1st May for at least 1000 years—and crowds have gathered beneath Magdalen’s Great Tower for at least 500 years. From the Morris dancing in the Radcliffe square to the angelic singing at 6am in the morning to the all-nighter that precedes it, May Day is quite the occasion in Oxford.

Alas, May Day won’t quite be the same when we’re not in Oxford. Although it marked only the second time I made it to college breakfast last year (the first being my first ever day at Oxford), I sadly will not be returning this year. Certainly, the large crowds around Magdalen won’t be present—but fear not, you can still hear Magdalen College’s choristers’ beautiful singing (at the disgustingly early time of 6am) online—a virtual event has been setup on Facebook and currently 3.5 thousand people are ‘interested’ in the event.

Indeed, they’re hoping to beat their 27,000 strong record from 2017 (when May Day fell on a bank holiday). The “Virtual May Morning”, organised by Oxford’s City Council and Daily Info Oxford, will be livestreamed, and will not only feature the Choir, but also Morris dancing, a spoons tutorial, some music and a quick history lesson from Tim Healey. At 8am, they will break, encouraging everyone to sing ‘Somewhere over the rainbow’. Clearly, the celebration continues in full swing.

But what’s the big deal anyway? Why do we all celebrate May Day? Or is it just an excuse to party all night? May Day is now a pretty obscure holiday, but its celebration has remained strong in Oxford—both amongst the student night revellers and the tourists who have travelled from afar.

From the Morris dancing in the Radcliffe square to the angelic singing at 6am in the morning to the all-nighter that precedes it, May Day is quite the occasion in Oxford.

May Day is perhaps best symbolised by its eighteenth-century celebration in Sweden and Germany. Each year the citizens performed a seasonal play about passion. Two groups of young men on horseback would approach one another; one group, wearing animal furs, would hurl snowballs. The other, clad in flowers and leaves, would knock them off. Winter is pushed back by summer.

But where did it all start? As with all good myths, we don’t really know. Some think this was a revival of the ancient Roman spring festival, “Floralia”, which honoured the goddess of flowers, Flora—but it’s probably just coincidental. Others trace it to Beltane—“lucky fire”—which celebrated the coming of the summer season on 30th April in Gaelic culture, and has been attested to since 900 AD. Certainly, May Day has been celebrated in England for at least 600 years, and famously involves the Maypole, morris dancers, gathering flowers and general frivolity.

This general frivolity has always been seen as scandalous, sexual, and joyful—and this has certainly continued in the Oxford student’s tradition of staying up all night before hearing Magdalen’s choristers singing on May Morning. Some traditions have been less successful—for example, jumping off Magdalen bridge was a common occurrence from at least the 1980s. Since the river is quite shallow, though, this has led to serious injuries twice. Indeed, just as Parliament banned all maypoles in 1644, there have been quite a few years when Magdalen bridge has been shut for the celebration, with barriers being put up and security hired to ensure people don’t continue to jump into the river.

The tradition of gathering below Magdalen’s Great Tower at 6am has a long history, going back over 500 years. Typically tens of thousands crowd below the tower early in the morning to hear the Hymnus Eucharisticus sung from the top of the tower, followed by about 20 minutes of bell-ringing. After which they break out the morris dancers and a general party atmosphere involving music and dancing. In the 1970s May Morning starred the ‘Oxcentrics’, an Oxford University jazz group many of whose members were from Univ. It’s been depicted in as diverse sources as Vera Brittain’s poem from 1916, “May Morning”, and Richard Attenborough’s 1993 film, Shadowlands, about C.S. Lewis.

Our celebrations of May Day may have changed, but if it teaches us anything this year, it should be that nature and time continue to move forward at full throttle—life will have to go on.

May Day has also been known for its rather raucous occasions. Beyond bridge jumping, the scandalous nature of May Day hasn’t failed to capture the media’s attention, with national newspapers reporting on Oxford students needing a helping hand getting home after staying up all night at May Eve parties. But the scandal isn’t new: in the 19th century students are said to have rioted, and in 1997 a “cantankerous” red dragon “caused havoc” on Broad Street.

As early as 1250, the Chancellor of Oxford University forbade masked dancing, disorderly noises and “all processions of men wearing wreaths and garlands made of leaves of trees or flowers or what not.” Meanwhile, in 1923 the police ensuring everything went smoothly were so impressed by the morris dancing that they formed their own team, which danced from 1923 to 1936. Most recently, Extinction Rebellion dressed in green, dancing to music.

The essence of May Day is in celebrating the kaleidoscope of activity which summer brings. This summer, unfortunately, will not be a traditional one. Stuck inside and without large gatherings, the only frenzy of activity involves Zoom’s share prices. But the beautiful sunny days will go on as normal, and the flowers will continue to bloom. Our celebrations of May Day may have changed, but if it teaches us anything this year, it should be that nature and time continue to move forward at full throttle—life will have to go on.