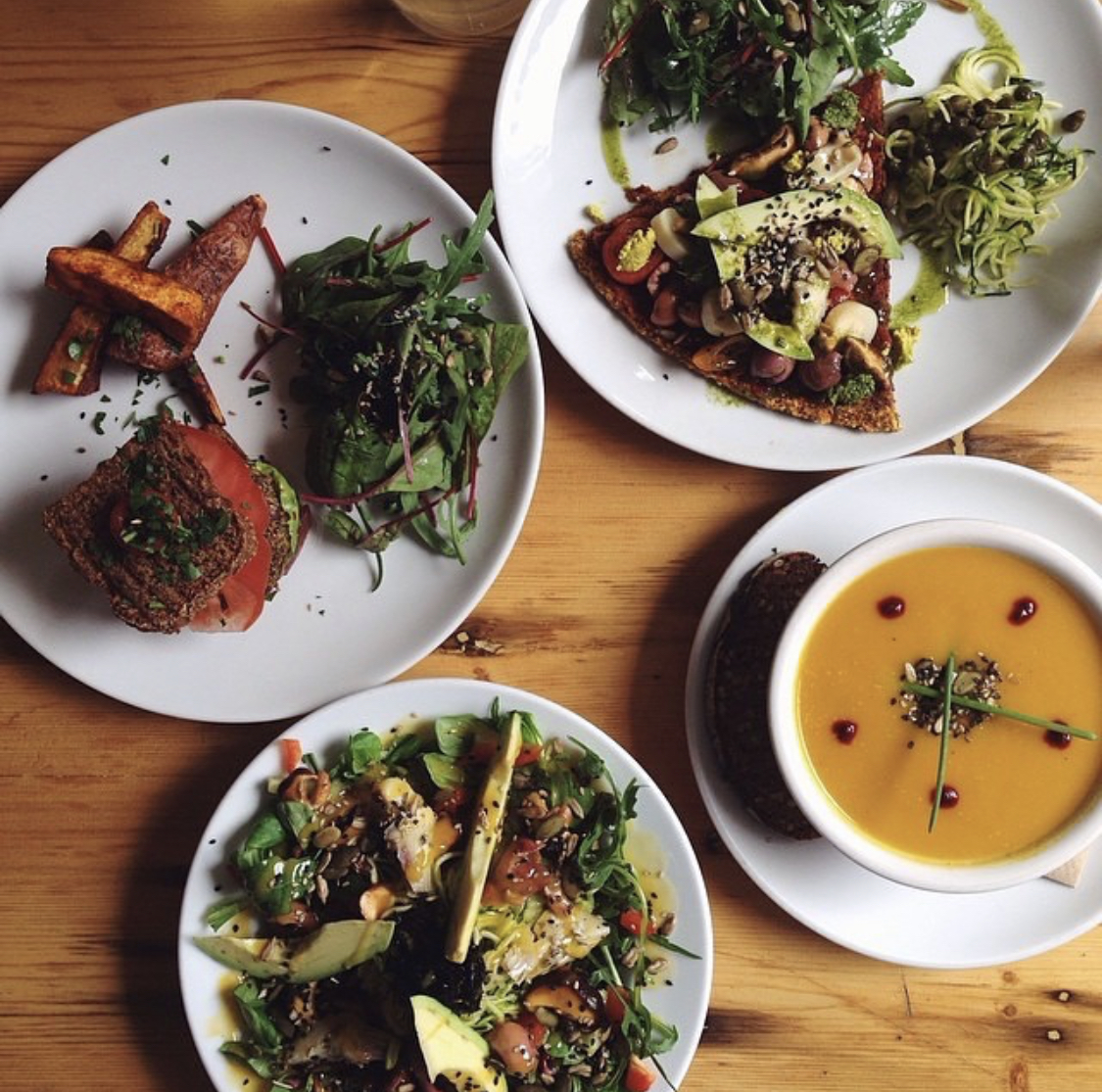 For my parent’s generation, catering for vegetarians was certainly not the ‘norm’. In fact, ‘vegetarian’ wasn’t a recognised term like it is today – plenty of people had never met a vegetarian before, and to embrace that title was to identify yourself as completely outside of the mainstream. Since then, social stigma has greatly improved and it’s rare to not find mushroom risotto on a restaurant menu, let alone expect a look of confusion – or even repulsion – from friends or family as a free side-dish accompanying their order.

Veganism is also gradually being accepted. Whilst it’s rare for someone to say they are vegan without being scrutinised for their dietary choices or posited counter-arguments, the situation has swiftly improved as it becomes more accepted and options like cheese alternatives and egg substitutions become available. I distinctly recall one particular lunchtime in year 10 when my best friend had mince thrown in her face and plate by a boy shouting various abusive terms; she had just turned vegan and was the first in our entire school. At the time, no one questioned his actions, and I was told off for demanding his apology. This all followed an ordeal with the catering staff who tried to serve her bacon-wrapped chicken with gravy. Even after repeating that no, she really didn’t eat meat, they offered a plate of chicken without the bacon, and for about a month she made herself content with oily chips.

That was four years ago. Now, most people would (hopefully!) not tolerate such actions, let alone perform them, and would respect my friend for her choices regardless of their own beliefs. Figures from a survey by The Vegan Society indicates veganism is also gaining popularity, with approximately 600,000 vegans in the UK in 2018 – just over 1% of the population[1].

But in the background is another diet that receives less attention: “raw foodism”.

I have to admit that I was completely ignorant of what a raw food diet actually meant before writing this article. What follows is a disclaimer: having never actually met anyone who follows this diet, Google quickly became my best friend.

BBC Good Food seemed the most logical place to start. Here I learnt that a raw diet consists of unprocessed, untreated and unrefined foods that have not been cooked – more precisely, never heated above 48C (although figures vary between sources). Apparently it all began in the late 1800s after a doctor named Maximilian Bircher-Benner cured his jaundice by eating raw apples, stimulating a series of experiments into the effect raw foods have on human health. Few people follow a 100% raw diet, and it ranges from raw vegans to raw omnivores who eat uncooked or dried meat, unprocessed dairy products and even raw eggs. Generally speaking, however, dieters avoid pasta, bread, pastries, alcohol (maybe this explains why I’m yet to meet a ‘raw’ student?), chips and table salt (which rules out Hassan’s – perhaps another reason), refined sugars and flours, pasteurized dairy… the list goes on. Not even coffee or tea are permitted. Ovens, microwaves, hobs, barbeques are all ruled out and replaced instead with juicers, blenders and dehydrators.

So to summarise, raw foodism is based on a principle of eating unprocessed and uncooked foods. So what do people like Woody Harrelson actually eat?

Depending on how strict you are, the list includes fresh fruits and raw vegetables, dried fruits, nuts, seeds, raw nut butters, nut milk, coconut milk, coconut oils, fermented foods like sauerkraut, seaweed, (for some) raw fish like sushi and raw or dried meats, and soaked and sprouted beans, legumes and grains (for easier digestion).

Placed in context, here are a few examples of what a day could look like eating only raw foods:

Now for the critical question: what are the benefits, if any?

As it turns out, the benefits are few and far-fetching. Supporters argue that raw foods have higher nutritional values as some minerals and vitamins are destroyed during the cooking process, in particular the water-soluble ones like vitamin B and vitamin C. For example, tomatoes lose approximately 10% of their vitamin C content when heated above 57C for just two minutes. However, other fruit and vegetables benefit from cooking by breaking down the cell wall, making nutrients easier to be digested and absorbed, such as beta-carotene found in carrots and sweet potatoes (a compound converted to vitamin A in the body). Likewise, bonds in the tertiary structure of starch and protein are broken into smaller and easier to digest chains.

It is also argued that ‘vital’ enzymes needed for digestion which are found in our food are denatured during cooking when heat breaks the bonds holding together the polypeptide chains that maintain an enzyme’s shape. I’m no scientist, but doesn’t our body produce its own enzymes for digestion? Besides, enzymes found in food are denatured in the acidic environment of the stomach, so scientists believe this argument is fairly weak.

I came across one raw food advocate called ‘Fully Raw Kristina’ who was diagnosed with Type 2 diabetes aged 16, and decided two years later to convert to a completely raw food diet. She ‘ate peaches for two weeks straight when I began’, and two years later she no longer diabetic. Since then, she started a business entailing a YouTube channel, recipe books and ‘FullyRaw Retreats’ in Bali and St. Lucia. But – and here’s where the numbers really crunch – to benefit from her recipes, answers to FAQs, meal plans and shopping lists, you have to join the ‘Inner Circle’ costing $47/month. This subscription roughly equates to £38/month, adding up to a grand total of £450/year. Now also seems an appropriate time to say that there is limited scientific evidence that support the claim of preventing or controlling diabetes.

A raw diet does make the national five-a-day goal seem like a walk in the park meaning individuals benefit from a higher intake of minerals, vitamins and fibre. It also means you avoid processed foods containing chemical food additives to lengthen shelf life and added sugars and saturated fats to cater for the sweeter tooth of modern ages – both have long been associated with negative health impacts. Studies note that raw food diets seem to lower blood cholesterol, as well as lowering the number of carcinogens consumed which increase cancer risk. A raw diet is also effective for people trying to lose weight, although some doctors online have said the demands and restrictions of the diet make it hard to maintain in the long run which can lead to more weight gain after coming off. More importantly, one group of researchers found that about 30% of women under 45 developed amenorrhea, a term for when menstrual periods stop due to insufficient calories.

There are, in fact, plenty of health concerns, especially in those following the diet strictly or over a long time period. For starters, without taking supplements, individuals have a lower intake of vitamin B12, vitamin D, iron and calcium. And whilst omnivores obtain their protein from meat and fish, vegetarians from eggs and vegans from legumes like lentils, chickpeas and beans, raw foodists mostly rely on nuts. Furthermore, there is a significant danger of food poisoning from Salmonella bacteria for those that eat raw eggs and meat, as well as from Listeria bacteria in unpasteurised milk.

Other drawbacks include the expenses. Organic ingredients are usually more costly and some people may be required to travel much further afield to find a grocery or speciality store that stocks a wide range of raw and organic products. Then there are the appliances: from blenders to juicers to dehydrators to food processors for slicing, grating and shredding, a quick search on Amazon indicated these run from £80 well into the hundreds.

Above all else, the diet strikes me as very isolating. It’s hard to eat out unless you can find a speciality restaurant because even a salad may have a dressing which contains ingredients that aren’t raw or natural. Staying around a friend or relative’s house would likely be very challenging for them to cater for you unless they too were raw foodists, so it would be easy to find yourself feeling guilty or even cancelling plans due to your inconvenient dietary choice. Don’t get me wrong – there seems to be an entire online community supporting one another, but as the diet is far more limiting than vegetarianism and veganism it’s not nearly as popular and so chances are you won’t have an immediate social network of raw foodists.

It would seem that the negatives far outweigh the benefits, some of which lack strong scientific evidence. This doesn’t discount the diet entirely as we could probably all benefit from eating a few more vegetables and fruits, but balance is key.  Raw foodism is an overarching concept interpreted differently depending on the dieter, with the degree of strictness varying between individual. But there is clearly a reason why doctors ask pregnant women, young children and seniors, people with weaker immune systems and chronic medical conditions like kidney disease to avoid this diet, and why many don’t recommend to anyone. Raw foodism seems to me to be an example of where too much of a good thing isn’t good anymore.